WASHINGTON D.C. September 9, 2014 — Artificial membranes mimicking those found in living organisms have many potential applications ranging from detecting bacterial contaminants in food to toxic pollution in the environment to dangerous diseases in people. Now a group of scientists in Chile has developed a way to create these delicate, ultra-thin constructs through a “dry” process, by evaporating two commercial, off-the-shelf chemicals onto silicon surfaces.

Described in The Journal of Chemical Physics, from AIP Publishing, this is the first time anyone has ever made an artificial membrane without mixing liquid solvents together. And because the new process creates membranes on silicon surfaces, it is a significant step toward creating bio-silicon interfaces, where biological “sensor” molecules can be printed onto cheap silicon chip holding integrated electronic circuits.

“Our idea is to create a biosensor that can transmit electrical signals through the membrane,” said María José Retamal, a Ph.D. student at Pontificia Universidad Católica de Chile and first author of the paper. 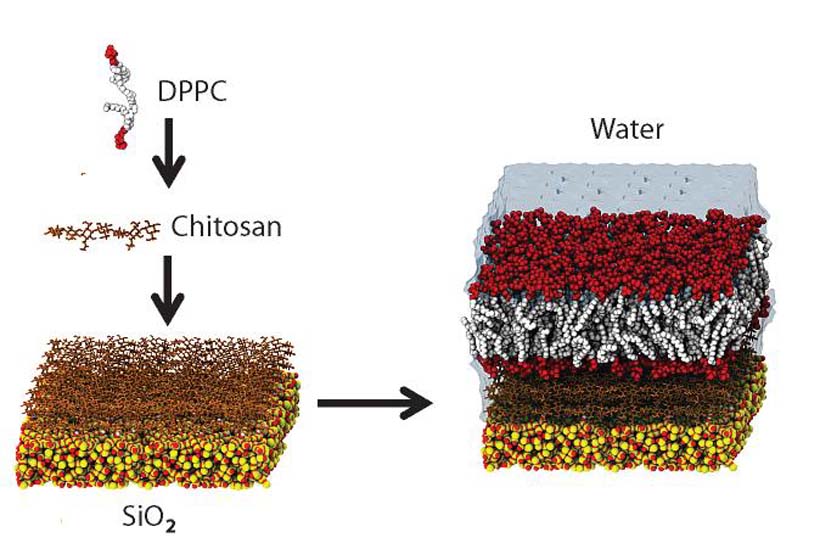 Membranes for Technology, as for Life

The importance of lipid membranes to life is hard to overstate. They are a principal component of the cell, as fundamental as DNA or proteins, and all known organisms on Earth, from the bittiest bacteria to the biggest blue whales, use membranes in a multitude of ways.

They separate distinct spaces within cells and define walls between neighboring cells — a functional compartmentalization that serves many physiological processes, protecting genetic material, regulating what comes in and out of cells, and maintaining the function of separate organs.

Synthetic membranes that mimic nature are of great interest to science because they offer the possibility of containing membrane proteins — biological molecules that could be used for detecting toxins, diseases and many other biosensing applications.

Retamal and her colleagues created the first artificial membrane without using solvents on a silicon support base. They chose silicon because of its low cost, wide availability and because its “hydrophobicity” (how much it repels water) can be controlled chemically, allowing them to build membranes on top.

Next they evaporated a chemical known as chitosan onto the silicon. Chitosan is derived from chitin, a sugar found in the shells of certain crustaceans, like lobsters or shrimp. Whole bags of the powder can be bought from chemical companies worldwide. They chose this ingredient for its ability to form a moisturizing matrix. It is insoluble in water, but chitosan is porous, so it is capable of retaining water.

Finally they evaporated a phospholipid molecule known as dipalmitoylphosphatidylcholine (DPPC) onto the chitosan-covered silicon substrate and showed that it formed a stable “bilayer,” the classic form of a membrane. Spectroscopy showed that these artificial membranes were stable over a wide range of temperatures.

More work is needed to standardize the process by which proteins are to be inserted in the membranes, to define the mechanism by which an electrical signal would be transmitted when a protein binds its target and to calibrate how that signal is detected by the underlying circuitry, Retamal said.

“This is a powerful tool,” she added. “The idea is that it will be used by the rest of the scientific community in order to improve existing techniques.”

Towards bio-silicon interfaces: Formation of an ultra-thin self-hydrated artificial membrane composed of . . .