Inspired by the Compound Eyes of Common Fly, Penn State Researchers Determine How to Make Miniature Omnidirectional Sources of Light and Optical Sensors

WASHINGTON D.C., September 9, 2014 – In our vain human struggle to kill flies, our hands and swatters often come up lacking. This is due to no fault of our own, but rather to flies’ compound eyes. Arranged in a hexagonal, convex pattern, compound eyes consist of hundreds of optical units called ommatidia, which together bestow upon flies a nearly 360-degree field of vision. With this capability in mind, a team of researchers at Pennsylvania State University is drawing on this structure to create miniature light-emitting devices and optical sensors.

“We were inspired by those eyes,” said Raúl J. Martín-Palma, an adjunct professor of Materials Science and Engineering at Pennsylvania State University. “We said, ‘OK, we can make something artificial using the same replicating structure to emit light in all directions, rather than what we have now, which is just planar, light-emitting diodes.’” Martín-Palma has been involved in work with ‘bioinspiration,’ in which ideas and concepts from nature are implemented in different fields of science and engineering, for the past seven years. He and fellow researchers describe their work in the journal Applied Physics Letters, which is produced by AIP Publishing.

Theoretical analysis of the compound eyes’ optical properties was complicated by the ommaditias’ nanonipples, 200-nanometer, tapered projections whose minute size make simulated calculations nearly impossible, due to its unpredictable scattering of light.

“It is much easier to just go ahead and fabricate the actual device and see what happens,” Martín-Palma said. So they did.

To test the structure’s light-scattering properties, the researchers extracted corneas from blow flies and coated them with a 900-nm-thick layer of tris(8-hydroxyquinolinato)aluminum, a well-known fluorescent polymer. They then induced the modified surface to emit visible light by exposing it to diffuse ultraviolet light.

When compared to a similarly coated flat surface, the modified ommatidia demonstrated a lesser angular dependence of emission, meaning that they tended to scatter light more uniformly in all directions. 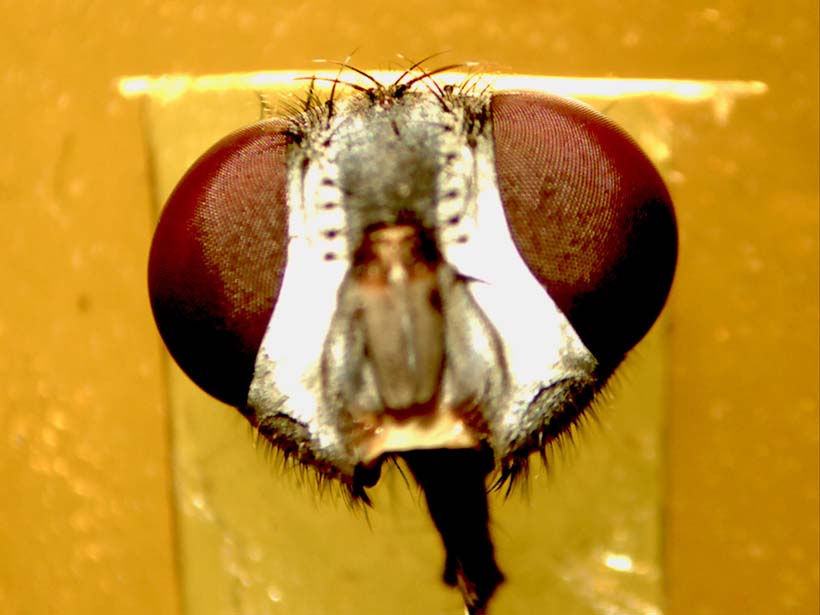 This increased emission and angular distribution means that the pattern of the fly’s cornea could soon be adapted into extremely minute light-emitting diodes and detectors, which would be able to process light output and input from a staggeringly wide field of vision.

While the corneas used in the experiment were taken from fruit flies, Martín-Palma and his colleagues do not advocate the mass harvesting of flies to create light sources.

“We have already developed a technique to mass-replicate biotemplates at the nanoscale, including compound eyes of insects,” Martín-Palma said. “So now when we want to make 100 bioreplicated eyes, we don’t have to kill 50 flies. We can make multiple copies out of one template.”