WASHINGTON, D.C., September 9, 2014 – The ability of pathogenic bacteria to evolve resistance to antibiotic drugs poses a growing threat to human health worldwide. And scientists have now discovered that some of our microscopic enemies may be even craftier than we suspected, using hidden genetic changes to promote rapid evolution under stress and developing antibiotic resistance in more ways than previously thought. The results appear in a new paper in the journal Biomicrofluidics, from AIP Publishing.

In the paper, researchers from Princeton University in New Jersey describe how they observed two similar strains of E.coli bacteria quickly developing similar levels of antibiotic resistance using surprisingly different genetic mutations. Developing different solutions to the same problem shows the bacteria have a diverse arsenal of genetic “weapons” they can develop to fight antibiotics, potentially making them more versatile and difficult to defeat.

“Bacteria are clever – they have hidden ways to respond to stress that involve re-sculpting their genomes,” said Robert Austin, a biophysicist at Princeton who led the research team.

Realizing how effectively bacteria can survive drugs is a sobering thought, Austin said. “It teaches us that antibiotics have to be used much more carefully than they have been up to this point,” he said.

Austin and his colleagues specialize in developing unique, fluid-filled microstructures to test theories of bacterial evolution. Instead of using test tubes or Petri dishes – uniform environments that, Austin notes, exist only in the “ivied halls of academia” – the researchers build devices that they believe better mimic natural ecological niches.

The team uses a custom-made microfluidic device that contains approximately 1,000 connected microhabitats in which populations of bacteria grow. The device generates complex gradients of food and antibiotic drugs similar to what might be found in natural bacterial habitats like the gut or other compartments inside a human body.

“In complex environments the emergence of resistance can be far more rapid and profound than would be expected from test tube experiments,” Austin said.

From previous experiments with the complex microfabricated devices, the researchers knew that some ordinary, “wild-type” strains of E.coli bacteria quickly evolved antibiotic resistance. They wondered if a mutant strain called GASP, which reproduces more quickly with limited nutrients than the wild type, would develop the same type of antibiotic resistance when exposed to the same drug. 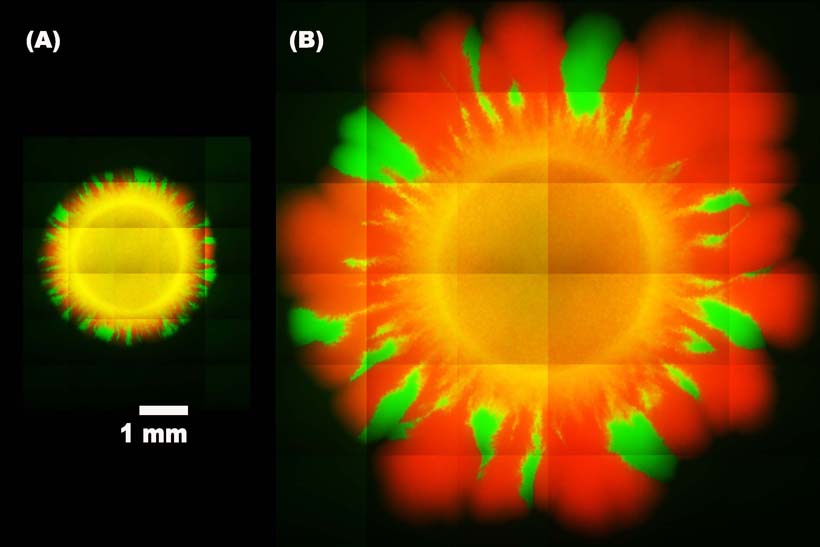 By sequencing the genomes of wild type and GASP bacterial colonies that has been exposed to the antibiotic ciprofloxacin (Cipro), the researchers found different genetic mutations could lead to similar levels of antibiotic resistance. For example, two different mutant strains emerged: one of the antibiotic-resistant GASP strains evolved in such a way that it no longer needed to make biofilms in order to survive stress. It did so by “borrowing” a piece of leftover DNA from a virus that infects bacteria. The other strain did not do this excision, indicating that in evolution the strains can hedge their bets.

Viruses routinely inject their own DNA into bacteria and sometimes DNA sequences remain that no longer seem to have any function in terms of viral replication. Under normal circumstances the leftover DNA may neither help nor hinder the bacteria, but in times of stress the bacteria can use the new DNA to rapidly evolve antibiotic resistant mutations.

The results demonstrate the subtlety and diversity of the tools that bacteria have to fight stress, said Austin. He wonders whether our remaining effective methods for killing bacteria, such as using ethanol to disinfect surfaces, are also vulnerable, and his team plans to test whether bacteria in their devices can evolve ethanol resistance.

You can’t tell a book by looking at the cover: cryptic complexity in bacterial evolution