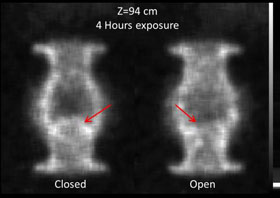 WASHINGTON, D.C., June 30, 2015 — In the United States, electricity comes with the flip of a switch and heat arrives with the push of a button. Behind such convenience lies a massive infrastructure network that produces and distributes energy. And just like roads wear down and need to be repaved occasionally, this energy infrastructure degrades over time. Pipes can corrode and concrete can wear thin. Failure can be catastrophic: when a Manhattan steam pipe burst in 2007, the resulting explosion killed one person, injured 30, and caused an estimated $30 million in damage to nearby businesses.

Seeking a better way to identify faulty energy infrastructure before it fails, researchers at Los Alamos National Laboratory are using subatomic particles called muons to analyze the thickness of concrete slabs and metal pipes. Their technique, described in a June 30 paper in the journal AIP Advances, from AIP Publishing, is a way to safely and non-invasively find worn infrastructure components using background radiation already present in the environment.

Muons are charged subatomic particles, formed when cosmic rays crash into molecules in Earth's upper atmosphere. The particles, which are more than 200 times heavier than electrons, can travel many meters through rock. Approximately 10,000 muons per minute strike each square meter of the Earth's surface, and as they pass through objects, their trajectory changes depending on the density of the object. By comparing the incoming and outgoing trajectories of muons to determine how much they are scattering, it is possible to detect objects otherwise hidden from view.

Right now, energy infrastructure safety is typically assessed using X-rays and ultrasound. "The way they typically scan pipes is pretty invasive," said Matt Durham of Los Alamos National Laboratory, the lead author on the study. "You have to shut off the pipe, strip off the insulation, then bring in specialized X-ray equipment." Plus, X-rays emit radiation that can be harmful to those in the vicinity, and their use requires specialized licensing, training and safety protocols.

Muons, on the other hand, are naturally present in the environment. By using them to monitor conditions, "we don't create any radiation — it's completely passive," said Durham.

Plus, muons are more powerful penetrators — they can "see" through insulation that would need to be stripped away before X-rays could successfully image a structure like a pipe. "The physical properties of muons allow them to penetrate incredible amounts of materials," said Durham.

The team tested whether muon multiple scattering tomography could be used to assess the thickness of concrete and pipes — two common construction materials — in the laboratory. Their particle tracker consists of two detectors, one placed above the object to be imaged and the other placed below. Each detector is made up of a set of gas-filled aluminum tubes, each containing a single thin wire at high voltage. As a muon traveling downwards passes through the electric field, it knocks electrons off of the gas. The tracker records where each electron hits the wire. "We stack up several layers of these tubes in criss-crossing orientations, and we can look at the pattern of hits" in order to reconstruct the muon's path, said Durham.

The muon tracker could distinguish between concrete tiles and stainless steel pipe walls of different thicknesses. It could also determine whether a check valve, which controls flow of materials through a pipe, was open or closed.

The images obtained from muon tomography lag behind ultrasound or X-ray analysis in resolution, but the techniques could be particularly effective when used in conjunction with each other. For instance, muon tomography could be used to quickly scan a large length of pipe for weak points. Then, inspectors could use more invasive but higher-resolution imaging methods to investigate solely the areas of specific concern.

The next step will be to test the device in the field. The group also plans to decrease the weight of the detector (which currently must be moved via forklift) by replacing the aluminum tubes with carbon fiber ones. They hope that eventually the muon tracker will be a practical tool for inspectors who are not necessarily trained scientists to use in the field.