WASHINGTON, D.C., June 29, 2015 — Fingerprint sensor technology currently used in smartphones like the iPhone 6 produces a two-dimensional image of a finger’s surface, which can be spoofed fairly easily with a printed image of the fingerprint. A newly developed ultrasonic sensor eliminates that risk by imaging the ridges and valleys of the fingerprint’s surface, and the tissue beneath, in three dimensions.

“Using passwords for smartphones was a big security problem, so we anticipated that a biometric solution was ahead,” said David A. Horsley, a professor of mechanical and aerospace engineering at the University of California, Davis. He is a director of the Berkeley Sensor and Actuator Center, which is located on the campuses of UC Davis and the University of California, Berkeley and is co-directed by Professor Bernhard Boser at UC Berkeley.

“After Apple announced a fingerprint sensor in their new iPhone in 2013, it was inevitable that more would follow,” said Horsley. He and his colleagues describe their new technology this week, in a story appearing on the cover of the journal Applied Physics Letters, from AIP Publishing.

The origins of the new technology began to come together in 2007, when the teams at the Berkeley Sensor and Actuator Center collaborated to initiate research into piezoelectric-micromachined ultrasonic transducers (PMUTs).

“We developed arrays of PMUTs, along with a custom application-specific integrated circuit (ASIC) and the supporting electronics,” Horsley said. “Our work was so successful that we spun off Chirp Microsystems, in 2013, to commercialize it.” Shortly before then, in 2011, while exploring other uses for their PMUT technology, they quickly realized that fingerprint sensing was an ideal fit.

“Luckily, we recruited a group of exceptional students to realize our vision, as well as partners within the industry—our co-authors at InvenSense Inc. and a few other companies—who funded the work and fabricated our designs,” Horsley said. 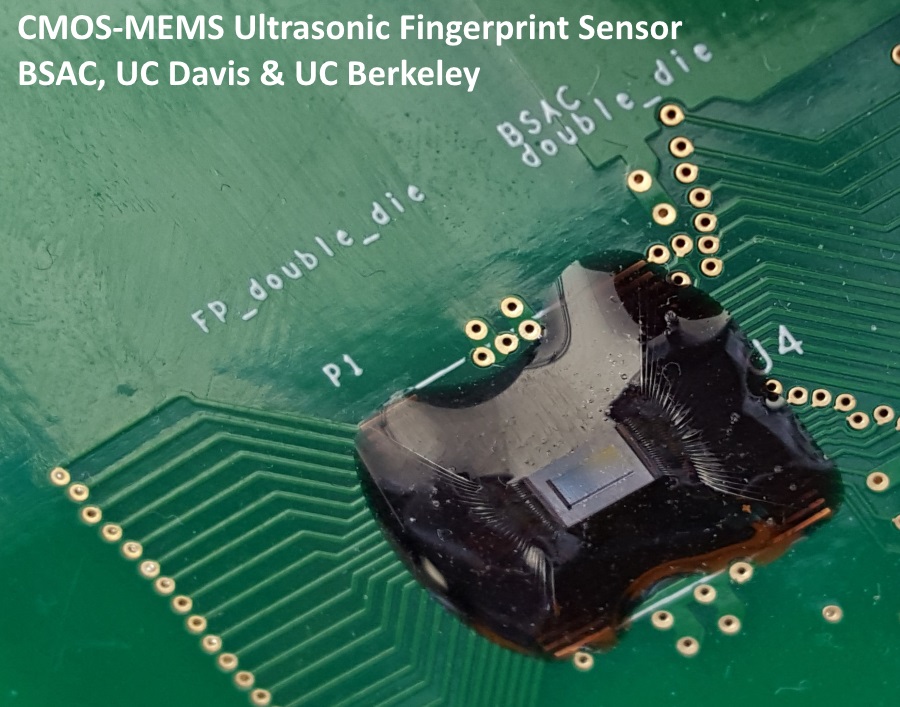 To fabricate their imager, the group employed existing microelectromechanical systems (MEMS) technology, which smartphones rely on for such functions as microphones and directional orientation. They used a modified version of the manufacturing process used to make the MEMS accelerometer and gyroscope found in the iPhone and many other consumer electronics devices.

“Our chip is fabricated from two wafers—a MEMS wafer that contains the ultrasound transducers and a CMOS wafer that contains the signal processing circuitry,” explained Horsley. “These wafers are bonded together, then the MEMS wafer is ‘thinned’ to expose the ultrasound transducers.” (CMOS, or complementary metal–oxide–semiconductor, is the silicon-based technology used to make transistors in microchips.)

Horsley’s group views ultrasound as the next frontier for MEMS technology. “Because we were able to use low-cost, high-volume manufacturing processes that produce hundreds of millions of MEMS sensors for consumer electronics each year, our ultrasound chips can be manufactured at an extremely low cost,” he said.

The imager is powered by a 1.8-Volt power supply, using a power-efficient charge pump on their ASIC or application-specific integrated circuit. “Our ultrasound transducers have high sensitivity and the receiver electronics are located directly beneath the array, which results in low electrical parasitics,” Horsley noted. “Using low-voltage integrated circuits will reduce the cost of our sensor and open up myriad new applications where the cost, size, and power consumption of existing ultrasound sensors are currently prohibitive.”

Within the realm of biometrics and information security, the group’s work is particularly significant, Horsley said. “Our ultrasonic fingerprint sensors have the ability to measure a three-dimensional, volumetric image of the finger surface and the tissues beneath the surface—making fingerprint sensors more robust and secure.”

Beyond biometrics and information security purposes, the new technology is expected to find many other applications, including “low-cost ultrasound as a medical diagnostic tool or for personal health monitoring,” he added.

The group also made arrays of MEMS ultrasound devices with highly uniform characteristics, which allowed them to verify that the PMUTs have very similar frequency response characteristics (see video).