WASHINGTON, D.C., May 23, 2017 — The massive, churning core of conducting liquids in stars and some planets creates a dynamo that generates the planetary body’s magnetic field. Researchers aim to better understand these dynamos through computer simulations and by recreating them in the laboratory using canisters of rapidly spinning, liquid sodium. 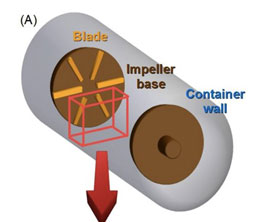 A new simulation based on the von-Kármán-Sodium (VKS) dynamo experiment, run jointly by the French Atomic Energy Commission (CEA), the National Center for Scientific Research (CNRS) and the École Normale Supérieure (ENS) from Paris and Lyon, takes a closer look at how the liquid vortex created by the device generates a magnetic field. Researchers investigated the effects of fluid resistivity and turbulence on the collimation of the magnetic field, where the vortex becomes a focused stream. They report their findings this week in the journal Physics of Fluids, from AIP Publishing.

The study is the first to examine the flow inside the churning blades at high resolution, and can offer ways to improve laboratory dynamos so that they more accurately recreate stellar astronomical observations.

“We hope that, in the future, we can give a better description of the flows,” said lead author Jacobo Varela, now a postdoctoral researcher at the Oak Ridge National Laboratory. “Using this approach, we can begin to understand the dynamo that is observed in the stars.”

Dynamos turn kinetic energy into magnetic energy by transforming the rotation of an electrically conducting fluid or plasma into a magnetic field. In the VKS dynamo, two impeller blades on either side of a cylinder filled with liquid sodium create turbulence, which can generate the magnetic field.

The mechanisms that create that field, however, are poorly understood. Other researchers have performed global simulations of sodium dynamos, but the models yielded low-resolution results. This research models the vortex-shaped flow within a small region next to an impeller inside the VKS dynamo.

“The helical flows between the impeller blades collimate the flow that strengthens the magnetic field and generates the field observed in the device,” Varela said.

The researchers simplified the device’s geometry and built focused magnetohydrodynamic simulations to understand how the flow turbulence and the device’s material characteristics affect the magnetic field collimation.

“We found that when you use magnetized ferromagnetic materials, there is an effective increase in the magnetic field collimation, resulting in a lower dynamo threshold, and this is what they observed in the experiment,” Varela said. 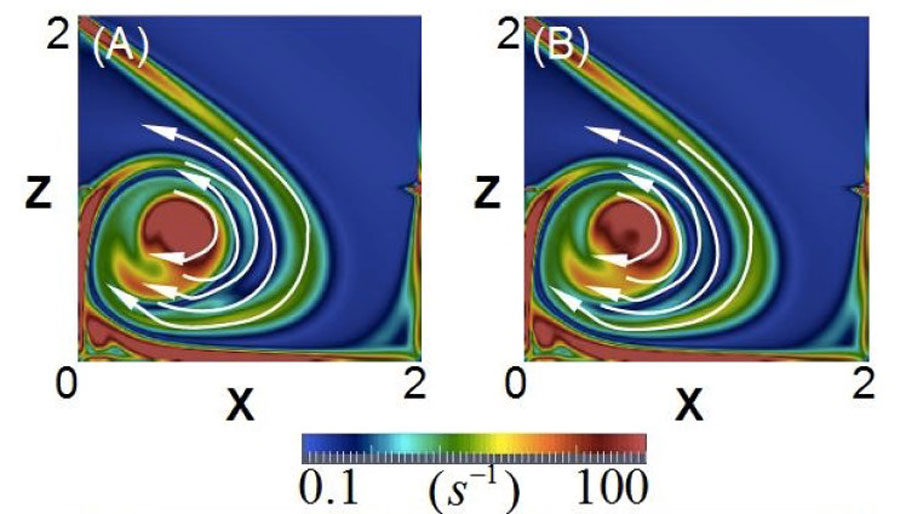 The researchers also analyzed their results in the context of the mean-field dynamo theory, which attempts to explain how stars and planets sustain their magnetic fields. As the turbulence increased in the simulation, the magnetic field shifted from a steady 1-to-1 with periodic oscillations, such as the ones observed in certain stars. The magnetic field of the sun, for example, switches polarity approximately every 11 years, which is a product of its turbulence and the speed of its rotation.

Varela and his colleagues at CNRS continue to develop the model to reflect the actual device’s geometry. They plan to investigate additional parameters, such as the blade shape and the magnetic field background, so that they can more closely simulate device performance and test ways to optimize the machine.

“The simulation we are performing is just the very first step, but with the model we have now, we can catch a lot of the physics they observe in the VKS dynamo experiment,” Varela said. “Our observations and data from the machine will give us much more evidence of the dynamo loop in stars and other astronomical objects.”

Effects of turbulence, resistivity and boundary conditions on helicoidal flow collimation: Consequences for the ...