WASHINGTON, D.C., May 30, 2017 — All matter making up the stars, our planet and life upon it came into existence 13.8 billion years ago as a result of the Big Bang. A millisecond after the Big Bang occurred, neutrons and protons formed and began to fuse into small atomic nuclei. This is known as the Big Bang Nucleosynthesis (BBN) era. During BBN, protons (hydrogen), the main building blocks of stars, combined with neutrons to form helium and other light elements. All of this happened within the first, approximately, 20 minutes of this new universe.

Neutrons, though, are inherently unstable (where lifetime, τ, is approximately 881 seconds) and don’t last long outside an atomic nucleus. Because the neutron decays on a time scale similar to the period for BBN, accurate simulations of the BBN era require thorough knowledge of the neutron lifetime, the average time required for a neutron to decay, but this value is still not precisely known. This week in the journal Review of Scientific Instruments, from AIP Publishing, scientists at Los Alamos National Lab (LANL) report an exciting new method to measure it.

Measurements of the neutron lifetime and accurate simulations of BBN require old neutrons to be freed from their nuclear cages. Christopher Morris of LANL and author of the new study explained that neutrons have been essentially “fossilized” in the nuclei of atoms. Studying these “fossil particles,” then, can provide a glimpse of the earliest moments of the universe’s existence.

By the time BBN ended, most neutrons were locked up in the nuclei of helium atoms. Today, almost all matter in the universe is still close to the initial delicate ratio of helium to hydrogen. The ratio is important since it determines how fast our sun burns hydrogen, powering life on earth.

The number of neutrons on earth is a direct result of BBN and later processes that occurred in ancient stars. By 4.5 billion years ago, there were finally enough neutrons around to form rocky planets, like Earth, and elements like carbon and oxygen, essential for life.

Morris explained that there are two ways to measure the neutron lifetime: The first is counting the number of protons produced when cold neutrons in a beam decay. The second is trapping the neutrons in a metal bottle, with magnetic fields or even via gravity, similar to how water is “trapped” in a bathtub. The method his group has developed uses a magnetic-gravitational trap involving a combination of magnets and gravity. 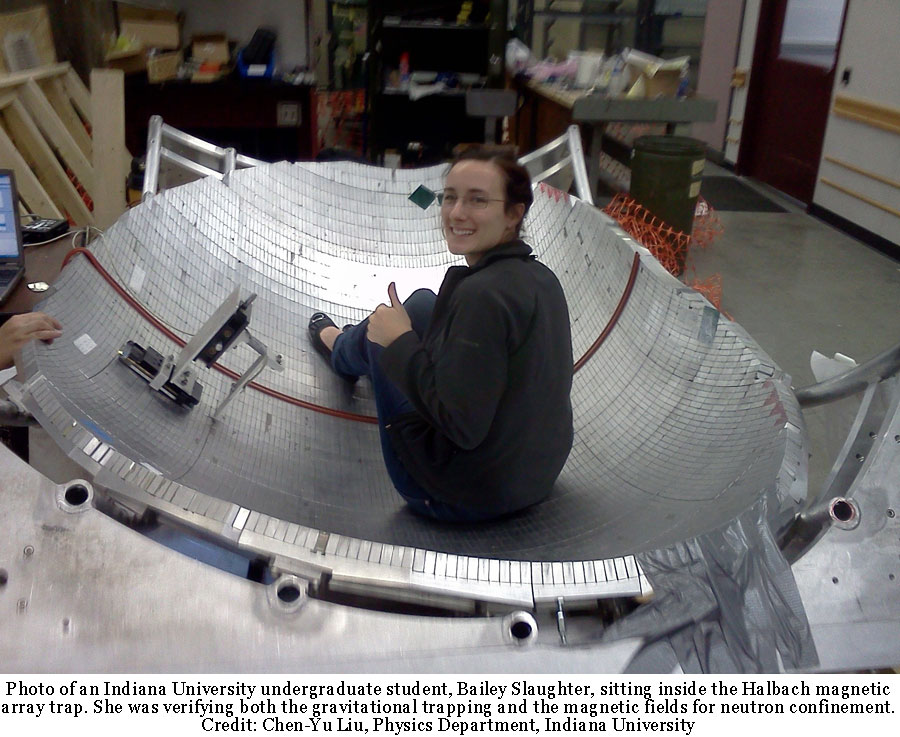 The trapping approach uses very cold particles, so-called ultracold neutrons, or UCNs. Either the bottle container’s walls or a magnetic field repel the neutral UCNs, causing them to hover in the device. According to standard physics, the only pathway these neutrons have for escape is through the decay into a proton and an electron.

The new device, assembled at LANL, involves a magnetic-gravitational trap with a shape designed specifically to stir the neutrons as they fill the trap. This avoids problems in earlier experiments where slow-moving neutrons filled parts of the trap unevenly, resulting in possibly false lifetime measurements.

Previous experiments with beams and containers appeared to give sharply different neutron lifetimes, the most precise measurement using a bottle trap differs by almost four standard deviations from that measured in a beam. In the results published this week, Morris and co-workers report a neutron lifetime of 878 seconds, very close to that found in material bottle traps but differing significantly from the neutron lifetime measured in beams.

The difference between the beam and bottle measurements may be due to a still-unidentified error. Morris suggests a more exotic explanation is that neutrons disappear from the beam without ever producing a proton. This raises the prospect that the somewhat controversial and still-mysterious notion of dark matter might be involved. Future studies will explore these intriguing possibilities.