WASHINGTON, D.C., May 18, 2017 — Osmosis, the fluid phenomenon responsible for countless slug deaths at the hands of mischievous children, is fundamentally important not only to much of biology, but also to engineering and industry. Most simply put, osmosis refers to the flow of fluid across a membrane driven by a (solute) concentration difference — like water from a salted slug’s cells or absorbed by the roots of plants.

The current theory describing the osmosis-driven behavior makes the most accurate predictions for low concentrations, limiting its applicability to many real-world uses. As interest in research and development of osmotic-dependent processes grows, and broadens, so too does the need for a more granular theoretical understanding of the deterministic mechanisms.

New research now provides this thorough understanding, appearing as a pair of publications this week in The Journal of Chemical Physics, from AIP Publishing. The first paper deconstructs the molecular mechanics of osmosis with high concentrations, and generalizes the findings to predict behavior for arbitrary concentrations. The second piece of the study then simulates via molecular modeling two key forms of osmotic flow in a broadly utilizable way.

“Osmotic transport driven by salinity difference occurs across many biological systems, and it is also used in various industrial applications,” said Hiroaki Yoshida of the École Normale Supérieure (ENS) in France and Toyota Central R&D Labs, Inc., co-author of the paired publications. “The recent interest in its applications to micro- and nano-fluidic devices, such as for desalination, energy harvesting, and biomedical technology, just to name a few, boosts the growth of this research field.”

The group decided two publications would provide a more thorough and useful overview of their finding and its implications.

“In this context, what inspired us to start this work was the fact that, in such diverse situations, one encounters the limitation of existing theoretical frameworks for studying the osmotic transports,” Yoshida said. “It was urgent to extend the theories applicable to wider situations, and at the same time, it was necessary to develop a relevant computational method for numerical studies. Since these goals were equally important, we decided to deliver the two messages as a series of papers.”

Regardless of concentration, there are two different geometrical components to osmotic flow that Yoshida and his colleagues, Sophie Marbach and Lydéric Bocquet, investigated: bare osmosis and diffusio-osmosis. Typically, they are regarded independently, but the group took a different approach and saw value in understanding how they relate to one another.

“Bare osmosis and diffusio-osmotic flow are geometrically different phenomena: Osmosis is a liquid transport across a membrane, and diffusio-osmosis is a flow parallel to the solid-liquid interface,” Yoshida said. “Therefore, these phenomena are usually dealt with independently. However, the driving force for these transports is common, that is the concentration (or chemical potential) difference, and thus we thought it is important to investigate them together. What we wanted to insist on was that these two transports should be analysed in a common framework, employing the energy barrier and the general-osmotic-pressure expression.” 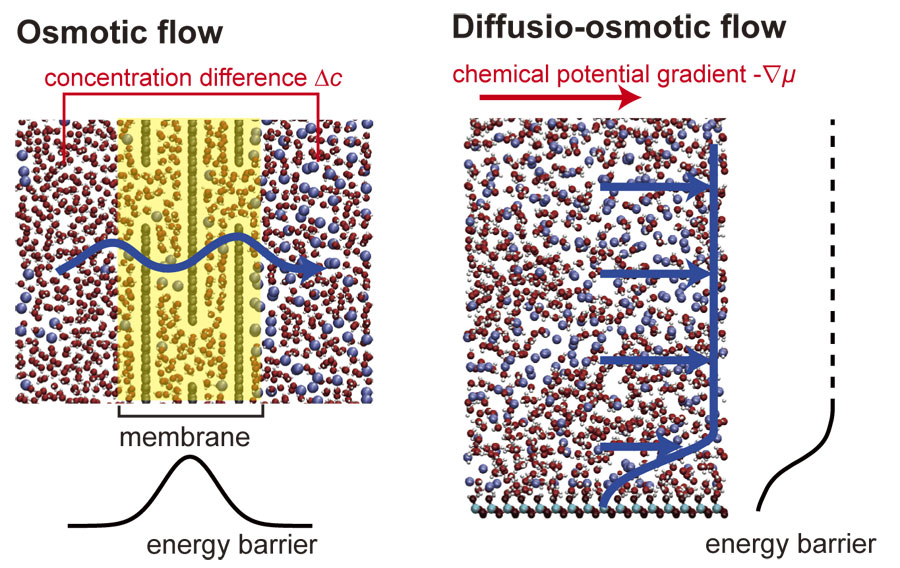 Using this common framework, they could then fully describe the driving mechanisms behind the transmembrane transport with only a few mathematical “ingredients.” Such a unified approach lends itself to broader generalizability.

“We rigorously derived analytical expressions describing these two important osmotic transport phenomena,” said Yoshida. “The key points that led us to these analytical expressions are, (i) energy barrier models, which allow us to describe the interaction between solute particles and the membranes, with the minimum ingredients; (ii) the use of a unified general thermodynamic expression for the osmotic pressure, in describing the driving force for these transports.”

Their theoretical rigor then extended into molecular level simulations to verify the theory they report first, supported by observations of real solution dynamics.

“Secondly we carried out numerical simulations to verify our theoretical results,” Yoshida said. “We proposed a novel non-equilibrium molecular dynamic (NEMD) methodology to realize the molecular dynamics simulation for the diffusio-osmotic flow. We validated the method both numerically and theoretically, and applied it to realistic systems with water-ethanol mixture in contact with a graphene and a silica surface.”

Though so much work is already complete, their findings have only provided yet more work to be done — often the ideal result of scientific inquiry. The work’s wide implications scale its potential benefits to more complex osmotic phenomena and untapped applications.

“The present theoretical results will bring forward the fundamental approach toward understanding various experimental results, to estimate the effects of osmosis and diffusio-osmosis in liquid transport across nano-porous membranes,” Yoshida said. “In addition, the proposed NEMD method is a very powerful tool to explore various phenomena caused by the concentration or chemical potential gradient. In particular, diffusio-phoretic transport involving complex molecules, such as polymers and polyelectrolytes (DNA), will be explored next.”

Personally, Yoshida hopes to see the work have a positive impact to energy harvesting, an industry that has huge growth potential with innovative membranes.

“There is a rapidly growing interest in applications using concentration difference or gradients to extract power,” he said. “An example showing the potential of the concentration difference is the fact that when fresh river water mixes with seawater, an energy equal to a 270 m high waterfall is released. The use of membranes with new materials for power generation is a very active research topic.”

The first article, “Osmotic and diffusio-osmotic flow generation at high solute concentration. I. Mechanical approaches,” is authored by Sophie Marbach, Hiroaki Yoshida and Lydéric Bocquet. The article appeared in The Journal of Chemical Physics May 16, 2017 [DOI: 10.1063/1.4982221] and can be accessed at http://aip.scitation.org/doi/full/10.1063/1.4982221.

The second article, “Osmotic and diffusio-osmotic flow generation at high solute concentration. II. Molecular dynamics simulations,” is authored by Hiroaki Yoshida, Sophie Marbach and Lydéric Bocquet. The article appeared in The Journal of Chemical Physics May 16, 2017 [DOI: 10.1063/1.4981794] and can be accessed at http://aip.scitation.org/doi/full/10.1063/1.4981794.

See above for the information for the two papers.