A team of Swiss researchers used THz spectroscopy to measure the surprisingly slow response of solvating water after changing the charge distribution of a dissolved dye molecule. 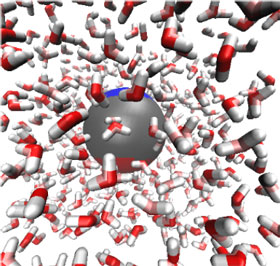 Researchers use spectroscopy to measure the interaction of matter with light and infer something’s physical composition. In this experiment, the researchers excited a dye molecule dissolved in water with an ultrashort visible laser pulse, changing its charge distribution. Then, a THz pulse measured the response of the surrounding water molecules as a function of the time after that excitation process.

THz spectroscopy, which is relatively low frequency, enables researchers to examine the forces that exist between water molecules. Observing these intermolecular forces could help researchers understand water’s anomalies, because hydrogen bonding in liquid water molecules make up many of water’s unexpected properties, like its unusual density maximum at 4 degrees Celsius.

“The response we found in the THz frequency range was surprisingly slow. Water is typically considered to be a very fast solvent with a response in the subpicosecond range, but we found a timescale around 10 picoseconds in the THz,” Hamm said. They attributed the slow timescale to the collective nature of the water response that was probed using THz spectroscopy.

Hamm clarified that researchers have been using THz spectroscopy for more than 20 years and cautioned optimism about the results. “The outcome often has been a bit disappointing because the THz spectra of liquids like water are extremely broad and blurred, and it’s very hard to extract information out of that,” he said. Time-resolved techniques, like in this study, might overcome that limitation.

Aqueous solvation from the water perspective