A promising new material has the right properties to capture solar energy and split water into hydrogen and oxygen.

WASHINGTON, D.C., June 18, 2018 — Solar energy is clean and abundant. But when the sun isn’t shining, you must store the energy in batteries or through a process called photocatalysis — in which solar energy is used to make fuels. In photocatalytic water splitting, sunlight separates water into hydrogen and oxygen. The hydrogen and oxygen can then be recombined in a fuel cell to release energy.

Now, a new class of materials — halide double perovskites — may have just the right properties to split water, according to a newly published paper in Applied Physics Letters, from AIP Publishing.

“If we can come up with a material that can be useful as a water-splitting photocatalyst, then it would be an enormous breakthrough,” said Feliciano Giustino, a co-author on the paper.

Researchers have experimented with many photocatalytic materials before, such as titanium dioxide (TiO2). While TiO2 can harness sunlight to split water, it’s inefficient because it doesn’t absorb visible light well. So far, no photocatalytic material for general water splitting has become commercially available.

Using supercomputers to calculate the quantum energy states of four halide double perovskites, George Volonakis and Giustino, both of the University of Oxford, found that Cs2BiAgCl6 and Cs2BiAgBr6 are promising photocatalytic materials because they absorb visible light much better than TiO2. They also generate electrons and holes (the positively charges absence of electrons) that have sufficient energy (or nearly ideal energies) to split water into hydrogen and oxygen.

Very few other materials have all these features at once, Giustino said. “We can’t say this will work for sure, but these compounds seem to have all the right properties.” 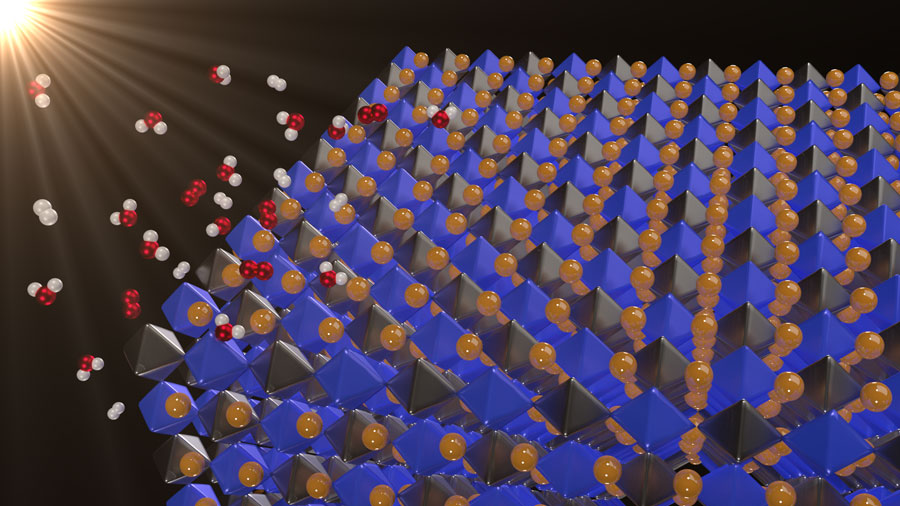 Giustino and his team originally discovered this type of perovskite while looking for materials to make solar cells. Over the last several years, perovskites have garnered interest as materials to boost the efficiency of silicon-based solar cells through tandem designs that integrate a perovskite cell directly onto a high-efficiency silicon cell, but they contain a small amount of lead. If they were used for energy harvesting in a solar farm, the lead could pose a potential environmental hazard.

In 2016, using computer simulations to identify alternative materials, the researchers found a new type of lead-free perovskite with potential for high-efficiency solar cells. The present paper shows these new materials may also split water. “These new double perovskites are not only promising as a complementary material for tandem solar cells, but they can also be promising in areas like photocatalysis,” Volonakis said.

Still, the new analysis is theoretical, assuming the compounds form perfect crystals. The next step, the authors said, is for experimentalists to see if the material works in the real world as well as predicted. In the meantime, the researchers are using their computational techniques to explore whether these double perovskites have properties useful for other applications like light detectors.