Microbubbles delivered via gas embolotherapy could provide a vehicle for cutting off blood supply and delivering drugs.

WASHINGTON, D.C., June 5, 2018 — Embolization — the use of various techniques to cut off the blood vessels that feed tissue growth — has gained traction over the past few decades to treat cancerous tumors.

This method of starving tumors of blood supply and nutrients is less invasive than surgery and typically involves injecting drugs (chemoembolization) or lodging nanoscopic beads directly into blood vessels.

Recently, scientists have explored another version of embolization, called gas embolotherapy. During this process, the blood supply is cut off using acoustic droplet vaporization (ADV), which uses microscopic gas bubbles induced by exposure to ultrasonic waves.

A team of researchers from China and France has discovered that these bubbles could also be used as potential drug delivery systems. The researchers reported their findings this week in Applied Physics Letters, from AIP Publishing.

“We have found that gas embolotherapy has great potential to not only starve tumors by shutting off blood flow, but also to be used as a source of targeted drug delivery,” said Yi Feng, associate professor of biomedical engineering at Xi’an Jiaotong University and first co-author of the paper.

In gas embolotherapy, researchers inject droplets, from tens to hundreds of nanometers in diameter, into feeder vessels surrounding the tumor. Microscopic gas bubbles are then formed from the droplets through ultrasound, growing large enough to block the feeder vessels (e.g., arterioles). ADV is the process of transforming droplets into bubbles.

In previous work, the researchers expected to use ADV to starve the tumor by blocking blood flow in the arterioles. To their surprise, they found that the bubbles not only blocked the arterioles, but other gas bubbles made their way into the capillaries, resulting in vessel rupture and more leaky microvasculature.

In their latest work, gas embolotherapy through ADV was performed to further explore the dynamics of the bubbles inside the capillaries. Testing was conducted ex vivo on rat tissue that attaches the intestines to the abdominal wall. It involved bubble formation in droplets of dodecafluoropentane containing a bovine serum which were injected into the blood flow. 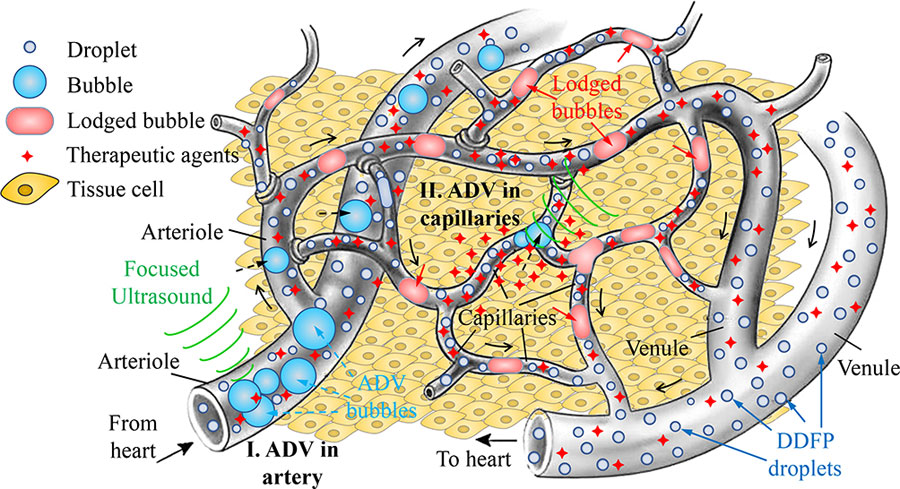 Produced in the dodecafluoropentane through ultrasound, the bubbles accumulated, sometimes merging, as they lodged themselves in the capillaries. At one point, the researchers observed a local vessel invagination (a pouchlike cavity), which they believe was caused by the interaction between the bubble and vessel and led to a capillary rupture.

Their findings could provide a one-two punch for cancer treatment — shutting off blood flow from the arterioles and delivering drugs through the capillaries. In addition, chemotherapy drugs could be kept localized for longer periods of time because blood flow has been shut down, reducing drug dosage.

“In cancer therapy research, scientists are always interested in answering two questions: how to kill the cancer effectively and how to reduce the side effects of chemotherapeutic drugs,” said Mingxi Wan, professor of biomedical engineering also at Xi’an Jiaotong University and corresponding author of the paper. “We have found that gas embolotherapy has the potential to successfully address both of these areas.”

With an ultrasound imaging method in place, according to Feng, gas embolotherapy has a good chance of becoming a standard practice. Wan and Feng’s team is working with another group of researchers in the same lab, and such an imaging system is being built to apply the ADV gas embolotherapy method in rats.