Washington, D.C., March 22, 2016 — Printing has come a long way since the days of Johannes Gutenberg. Now, researchers have developed a new method that uses plasma to print nanomaterials onto a 3-D object or flexible surface, such as paper or cloth. The technique could make it easier and cheaper to build devices like wearable chemical and biological sensors, flexible memory devices and batteries, and integrated circuits.

One of the most common methods to deposit nanomaterials—such as a layer of nanoparticles or nanotubes—onto a surface is with an inkjet printer similar to an ordinary printer found in an office. Although they use well-established technology and are relatively cheap, inkjet printers have limitations. They can’t print on textiles or other flexible materials, let alone 3-D objects. They also must print liquid ink, and not all materials are easily made into a liquid.

The plasma method skips this heating step and works at temperatures not much warmer than 40 degrees Celsius. “You can use it to deposit things on paper, plastic, cotton, or any kind of textile,” said Meyya Meyyappan of NASA Ames Research Center. “It’s ideal for soft substrates.” It also doesn’t require the printing material to be liquid. 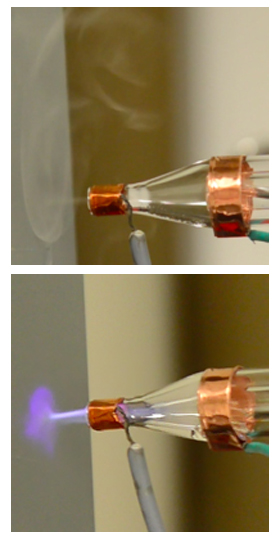 The researchers, from NASA Ames and SLAC National Accelerator Laboratory, describe their work in Applied Physics Letters, from AIP Publishing.

They demonstrated their technique by printing a layer of carbon nanotubes on paper. They mixed the nanotubes into a plasma of helium ions, which they then blasted through a nozzle and onto paper. The plasma focuses the nanoparticles onto the paper surface, forming a consolidated layer without any need for additional heating.

The team printed two simple chemical and biological sensors. The presence of certain molecules can change the electrical resistance of the carbon nanotubes. By measuring this change, the device can identify and determine the concentration of the molecule. The researchers made a chemical sensor that detects ammonia gas and a biological sensor that detects dopamine, a molecule linked to disorders like Parkinson’s disease and epilepsy.

But these were just simple proofs-of-principle, Meyyappan said. “There’s a wide range of biosensing applications.” For example, you can make sensors that monitor health biomarkers like cholesterol, or food-borne pathogens like E. coli and Salmonella.

Because the method uses a simple nozzle, it’s versatile and can be easily scaled up. For example, a system could have many nozzles like a showerhead, allowing it to print on large areas. Or, the nozzle could act like a hose, free to spray nanomaterials on the surfaces of 3-D objects.

The method is ready for commercialization, Meyyappan said, and should be relatively inexpensive and straightforward to develop. Right now, the researchers are designing the technique to print other kinds of materials such as copper. They can then print materials used for batteries onto thin sheets of metal such as aluminum. The sheet can then be rolled into tiny batteries for cellphones or other devices.