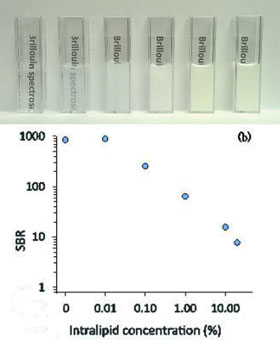 Washington, D.C., May 17, 2016 — At a microscopic level, every material contains spontaneous sound waves — acoustic phonons — that have properties dependent on the material’s mechanical properties. When light interacts with these acoustic phonons, it scatters and acquires a frequency shift related to the material’s elastic modulus, a characteristic measure of its ability to resist deformation and stress.

A technique known as Brillouin spectroscopy works by measuring this frequency shift, and has been an effective tool for noninvasively examining materials for several decades. The technique, however, necessitates scanning interferometers, which are low-throughput and result in long data acquisition times.

To bring this method to biological samples — such as a chicken breast, or a patient’s potentially cancerous tumor — researchers at the University of Maryland and Harvard Medical School have recently developed a new virtually imaged phased array-based Brillouin spectrometer. They describe their new interferometer configuration this week in Applied Physics Letters, from AIP Publishing.

“We have been developing this new VIPA-based Brillouin spectrometer for a long time. In this paper, we added a multi-pass low-finesse Fabry-Perot interferometer, which works as a tunable and narrowband filter,” said Giuliano Scarcelli, an assistant professor in the Fischell Department of Bioengineering at the University of Maryland.

While past development of virtually imaged phased array-based spectrometers allowed the researchers to collect the entire Brillouin spectrum in a single shot, saving processing time and power, the design could only interrogate transparent materials such as ocular tissue or cells because turbid media generate too much unwanted light noise for the spectrometer to handle.

By adding a triple-pass Fabry-Perot filter, the researchers were able to increase the spectrometer’s ability to suppress such unwanted light component by more than tenfold, allowing them to measure background-free spectra up to 100 micrometers deep within a sample of chicken tissue.

Future work for Scarcelli and his colleagues includes improving Brillouin technology to measure spectra faster, with greater sensitivity and at higher spatial resolution, as well as expanding characterization to include tumors, atherosclerotic plaques and brain tissue.