Millions of years of evolution have shaped how plants harness the interaction of light and fluid to grow, bend, and keep from drying out

WASHINGTON, D.C., May 17, 2016 – If you place a houseplant next to a sunny window, you may notice the leaves bending toward the light. Plants don’t have a brain, so the vast majority of movement is controlled by the interaction of light and fluid within plant cells, says Demetri Psaltis, Dean of the School of Engineering and director of the Optics Laboratory at the École Polytechnique Fédérale de Lausanne in Switzerland.

Psaltis and his colleagues have published a new paper in the journal APL Photonics, from AIP Publishing, that highlights examples of so-called optofluidics in plants. Optofluidics combine optical systems, which respond to and control light, with microfluidic systems, which move fluids through small channels. Psaltis, who helped launched the optofluidics field with a 2006 paper in the journal Nature, says he hopes to draw the attention of the optics community to plant physiology.

“I was fascinated by how plants use microfluidics and optics to move, change color, and pump water,” Psaltis said. “We hope by writing this paper to provide inspiration for new ideas in optofluidic devices.”

Psaltis and his colleagues dove into the scientific literature on plants and chose five light/fluid interactions to highlight. They explored photosynthesis, the process plants use to convert sunlight into sugar. They also examined the recent literature on the light-mediated movement of chloroplasts, which are the tiny organelles in plants that contain the green photosynthetic pigment chlorophyll.

In addition to making fuel, plants also use light to move large amounts of water. Psaltis says he was most surprised and inspired by how plants suck water from the ground, control their temperature, and keep from drying out.

“The plant actually doesn’t optimize the conversion of light to sugar,” Psaltis said. “In a tree, for example, most of the energy is used to heat and evaporate water.”

The evaporation process draws water from the ground into the tree’s leaves, where it plays an important role in photosynthesis.

At night, when photosynthesis shuts down, many plants conserve water by closing pores in their leaves called stomata. The stomata are another example of an optofluidic system. Sunlight drives a flow of ions across membranes in the stomata, which in turn causes fluid to flow into the cells and they swell open. 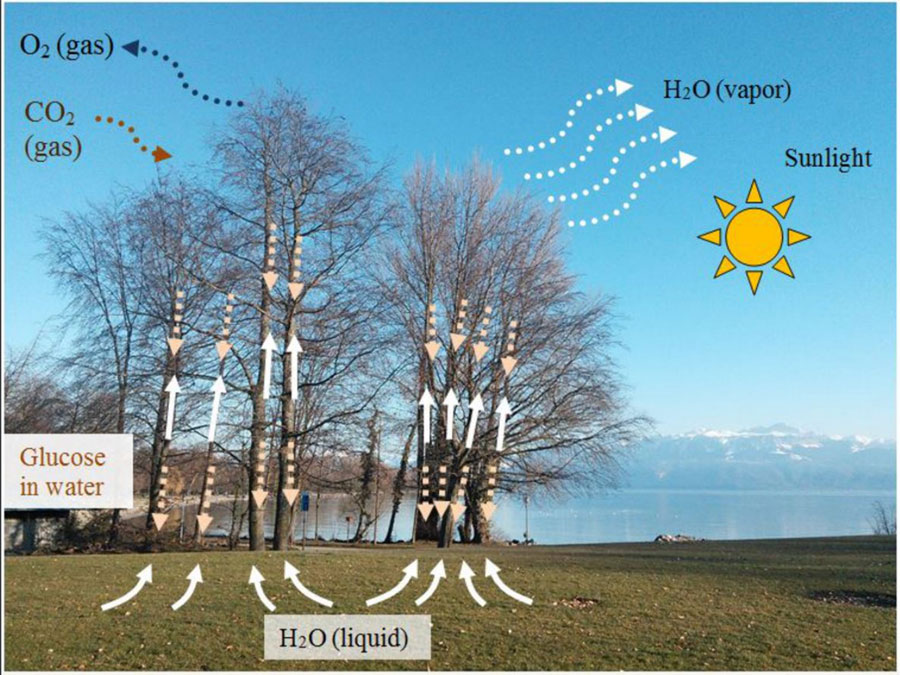 Psaltis said his own research has been affected by what he learned while writing the APL Photonics paper. He is now looking more closely at how membranes control fluid flow and how they might be used in optofluidic devices.

The paper highlights just a small fraction of existing plant research. Psaltis said he hopes others will be motivated to dive deeper in the reservoir of knowledge.

“There’s a vast amount of literature on plant physiology that technologists could look at,” he said.

École Polytechnique Fédérale de Lausanne and the University of Idaho