University of Southern California researchers determine that dynamics has little to do with accelerating enzyme-catalyzed reaction rates, and shed light on the 100-year-old puzzle of how enzymes really do and don’t work.

WASHINGTON, D.C., May 10, 2016 – Enzymes play a crucial role in most biological processes—controlling energy transduction, as well as the transcription and translation of genetic information and signaling. They possess a remarkable capacity to accelerate biochemical reactions by many orders of magnitude compared to their uncatalyzed counterparts.

So there is broad scientific interest in understanding the origin of the catalytic power of enzymes on a molecular level. While many hypotheses have been put forward using both experimental and computational approaches, they must be examined critically.

In The Journal of Chemical Physics, from AIP Publishing, a group of University of Southern California (USC) researchers present a critical review of the dynamical concept—time-dependent coupling between protein conformational motions and chemical reactions—that explores all reasonable definitions of what does and does not qualify as a dynamical effect.

The group’s work centers on multiscale computer simulations—for which Arieh Warshel, currently a distinguished professor of chemistry at USC, was awarded the 2013 Nobel Prize in chemistry, along with Michael Levitt and Martin Karplus—for exploring the complex actions of enzymes.

“In our studies, it’s electrostatic free energy,” said Bora. “But, to specifically address dynamical and kinetic isotope effects, we used an autocorrelation function of the energy gap, catalytic landscapes—constructed using a renormalization approach—and a quantum classical patch (QCP) approach to determine that dynamics don’t contribute to the catalytic power of enzymes.”

The key significance of the group’s work? “The catalytic activity of enzymes is fundamental to life, so gaining a solid understanding of the factors controlling and contributing to their activity at the molecular level is crucial,” said Bora.

With high-quality scientific data now available for the most interesting and complex biological molecules, “it’s essential to re-examine various catalytic proposals—especially electrostatic- and dynamic-based proposals,” he continued. “Our review focuses on clarifying the role of logical definitions of different catalytic proposals, as well as on the need for a clear formulation in terms of the assumed potential surface and reaction coordinates.”

The group determined, in previous efforts, that electrostatic preorganization actually accounts for the observed catalytic effects of enzymes. Their current work focuses on exploring the alternative dynamical proposal.

In terms of applications, the group’s enzyme modeling offers “major medical and fundamental value,” said Warshel. “For example, it can provide big improvements in enzyme design and advances in drug resistance. Most significant to me, personally, is that it’s a solution to the 100-year-old puzzle of how enzymes really do and don’t work.”

The scientific field of “computational enzyme designing,” in particular, stands to benefit from the group’s work. “The idea is to tailor desired enzymes for specific purposes—to be used as catalysts for several chemical and biochemical processes at industrial scales—using computational approaches to create artificial enzymes, which can be tested and further improved in laboratories later,” explained Bora. 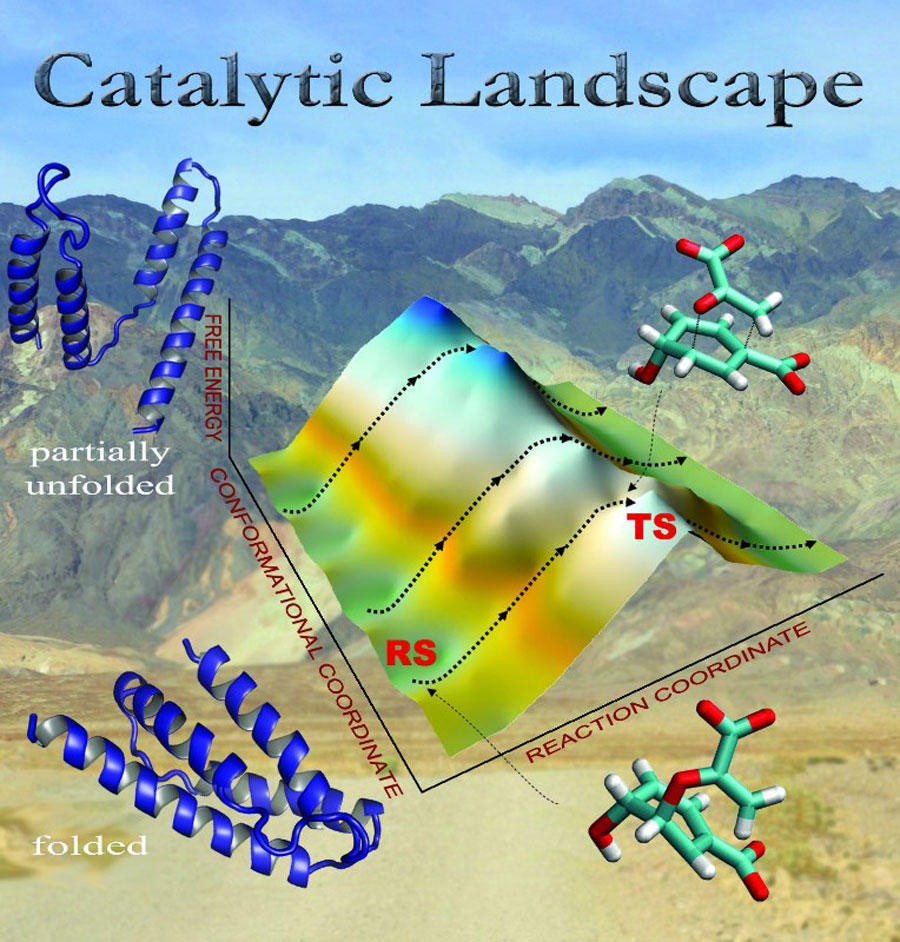 While the concept of designing enzymes computationally from scratch was initially considered intriguing, the field is evolving slowly. “This is largely because the current enzyme designing protocols don’t take the actual enzyme catalytic factors into account,” Bora continued. “Our work presents a very detailed discussion of these factors, and clarifies that it isn’t useful to try to optimize dynamical effects in enzyme design. Focusing on other factors will enable devising future designing protocols on a scientific basis—which will increase the success rate of computationally designed enzymes.”

What’s next for the group? “More efforts in enzyme design and drug resistance, as well as studies of complex molecular motors and signal transduction,” said Warshel.

The group’s critical analysis work will help further the exploration of the catalytic factors controlling enzyme catalysis. “Our clear vision about the enzyme catalytic factors means we can now devise effective artificial enzyme design protocols—purely on a scientific basis—that may fill the gap between rational design and laboratory discovery. This can provide insights into another fundamental issue in biology: What controls the evolution of proteins and enzymes?” noted Bora. “Successful design of enzymes may also help in the control of metabolic pathways.”

Perspective: Defining and quantifying the role of dynamics in enzyme catalysis