WASHINGTON, D.C., August 15, 2017 — Hall thrusters (HTs) are used in earth-orbiting satellites, and also show promise to propel robotic spacecraft long distances, such as from Earth to Mars. The propellant in a HT, usually xenon, is accelerated by an electric field which strips electrons from neutral xenon atoms, creating a plasma. Plasma ejected from the exhaust end of the thruster can deliver great speeds, typically around 70,000 mph.

Cylindrical shaped Hall thrusters (CHTs) lend themselves to miniaturization and have a smaller surface-to-volume ratio that prevents erosion of the thruster channel. Investigators at the Harbin Institute of Technology in China have developed a new inlet design for CHTs that significantly increases thrust. Simulations and experimental tests of the new design are reported this week in the journal Physics of Plasmas, by AIP Publishing.

CHTs are designed for low-power operations. However, low propellant flow density can cause inadequate ionization, a key step in the creation of the plasma and the generation of thrust. In general, increasing the gas density in the discharge channel while lowering its axial velocity, i.e., the speed perpendicular to the thrust direction, will improve the thruster’s performance.

The investigators tested a simple design change. The propellant is injected into the cylindrical chamber of the thruster by a number of nozzles that usually point straight in, toward the center of the cylinder. When the angle of the inlet nozzles is changed slightly, the propellant is sent into a rapid circular motion, creating a vortex in the channel. 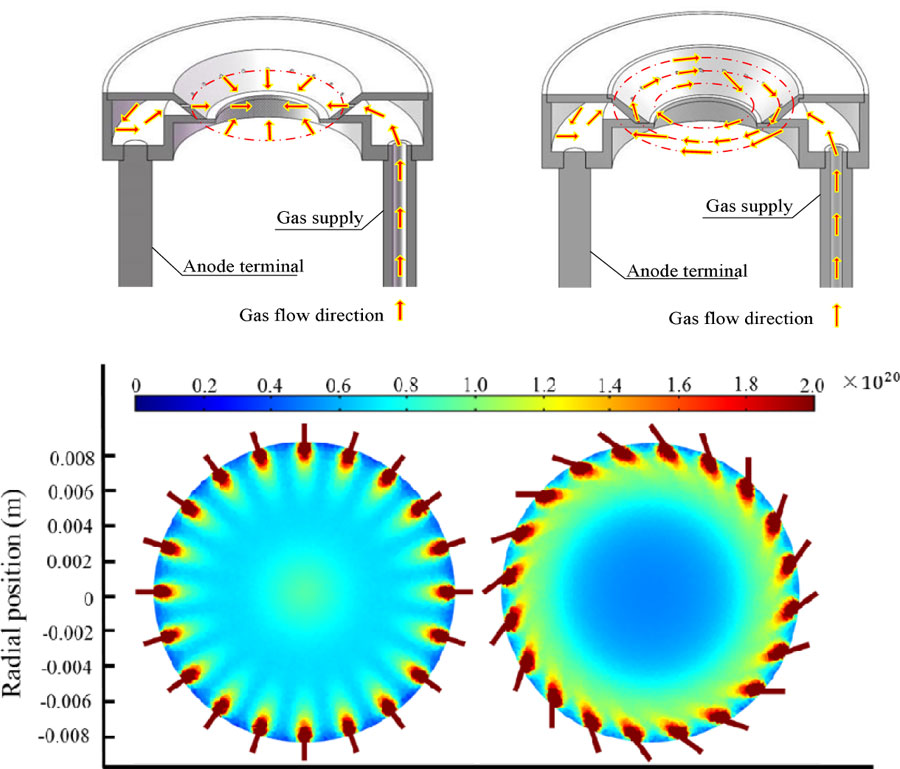 Wei and his coworkers simulated the motion of the plasma in the channel for both nozzle angles using modeling and analysis software (COMSOL) that uses a finite element approach to modeling molecular flow. The results showed that the gas density near the periphery of the channel is higher when the nozzles are tilted and the thruster is run in vortex mode. In this mode, gas density is significantly higher and more uniform, which also helps improve thruster performance.

The investigators verified their simulation’s predictions experimentally, and the vortex inlet mode successfully produced higher thrust values, especially when a low discharge voltage was used. In particular, the specific impulse of the thruster increased by 1.1 to 53.5 percent when the discharge voltage was in the range of 100 to 200 Volts.

“The work we report here only verified the practicability of this gas inlet design. We still need to study the effect of nozzle angle, diameter, the ratio of depth to diameter and the length of the discharge channel,” Wei said. He went on to predict that the vortex design will be tested in flight-type HTs soon and may eventually be used in spaceflight.