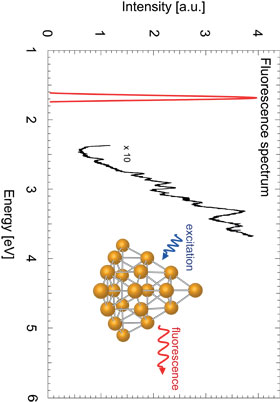 WASHINGTON, D.C., August, 16, 2017 — With their remarkable electrical and optical properties, along with biocompatibility, photostability and chemical stability, gold nanoclusters are gaining a foothold in a number of research areas, particularly in biosensing and biolabeling.

These gold nanoclusters are chemically protected by ligands, which also steer the binding to biological target molecules. There is still much that researchers don’t know about the luminescent properties of ligand-protected gold nanoclusters, including the origin of their fluorescence.

An international research team from Switzerland, Italy, the United States and Germany has now shown that the fluorescence is an intrinsic property of the gold nanoparticles themselves. The researchers used Au20, gold nanoparticles with a tetrahedral structure. Their findings were reported this week in The Journal of Chemical Physics, from AIP Publishing.

“We present the first optical absorption, excitation and fluorescence spectra of bare Au20,” said Harald Brune, head of the Institute of Physics at the École Polytechnique Fédérale de Lausanne (EPFL) in Switzerland and corresponding author of the paper. “Our results strongly suggest that the metal core in the ligand-protected clusters used for biosensing and biolabeling is at the origin of their fluorescence.”

The researchers created a beam of bare Au20 clusters by combining a cluster aggregation source with a custom-designed ion optic and mass selection process. It is difficult to probe the optical properties of these clusters in the gas phase, given the poor signal-to-noise ratio. To address this issue, the researchers embedded them into a solid neon matrix. This was achieved by depositing the cluster beam with a neon background gas that condensed onto a cold surface held at 6 kelvins (about -267 degrees Celsius) while the clusters were landing there.

Neon, a noble gas, provides a weak interacting medium. As the first-principles calculations accompanying the experiment show, in neon the intrinsic structural and optical cluster properties are preserved.

“Therefore, the presented experimental results are the best possible approximation to the optical properties of free Au20 clusters,” Brune said.

The Au20 absorption data was obtained by subtracting an Ne matrix reference spectrum from one of the Au20/Ne matrices. The fluorescence spectra were produced by laser excitation. The researchers found that excitation within the entire UV-to-visible range leads to intense and sharp fluorescence at a wavelength of 739.2 nanometers.

“[B]are Au20 strongly fluoresces, making it very likely that the origin of fluorescence in Au-based biomarkers comes from the Au core itself rather than from its interaction with the organic ligands,” said Wolfgang Harbich, senior scientist at the EPFL and co-author of the paper.

The discovery could enable the design of new gold-based biomarkers, and the experiment serves as benchmark for the elaborate, time-dependent density functional theory calculations of optical cluster properties — a topic gaining interest in fundamental chemistry and physics fields.

“The agreement between experiment and theory in the present case of Au20 is encouraging,” Brune said, “and will enable a deeper understanding of theory-supported biomarker research.” 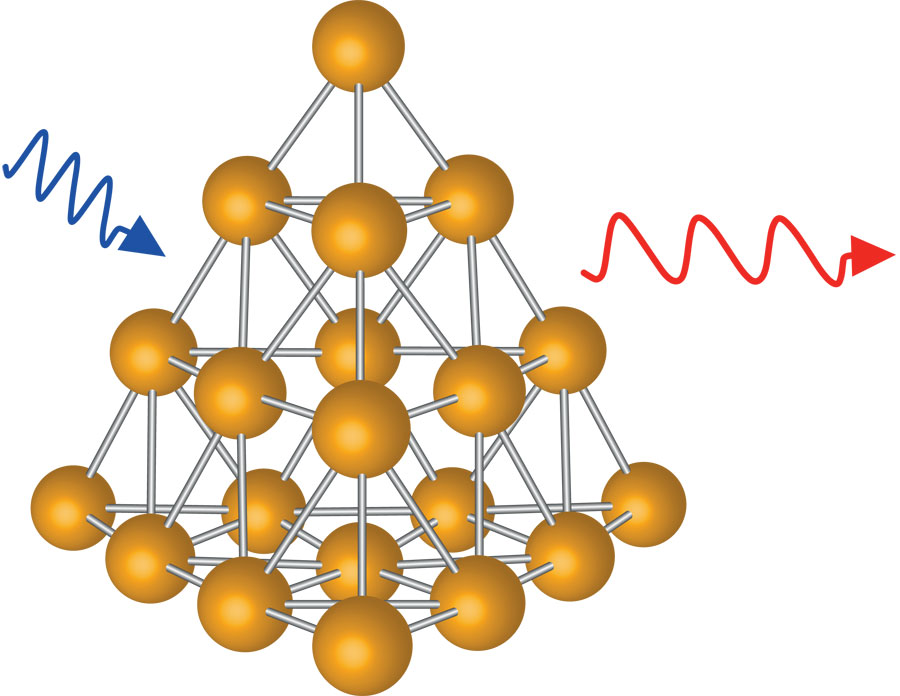