WASHINGTON D.C., August 15, 2017 — For the most part, fluid dynamics researchers have focused efforts to understand the details of impacting drops on flat rigid surfaces; the effect of curved, convex or compliant surfaces on the dynamics of impacting drops is still relatively unknown.  This is despite its extreme relevance to modern-day applications, such as 3-D ink-jet printing and the delivery of pesticides on leaves.

A team of researchers from the University of Liverpool Laboratory of Technical Physics in the United Kingdom has now detailed these effects by investigating the impact of water droplets on spherical soft surfaces. They present their research this week in the journal Physics of Fluids, from AIP Publishing.

“We took a soft material, a silicone polymer, and we were able to change the softness or hardness of this silicone, preparing it in different ways,” said Volfango Bertola, a member of the research team.

Generally, the impact parameters were shown to significantly affect the dynamic contact angle during impact. A quantitative estimation of deformation energy showed that this energy falls well below the viscous dissipation. 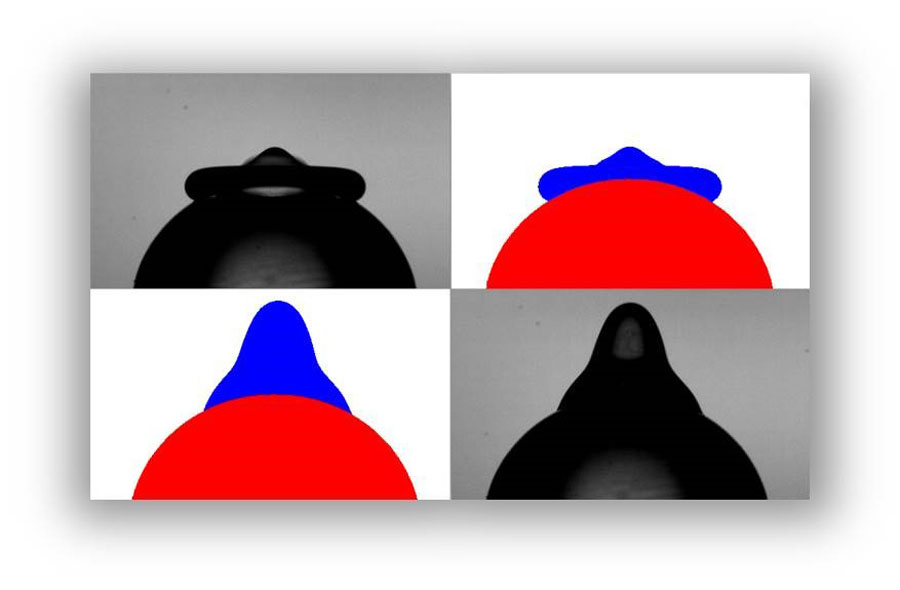 Of the three impact parameters studied, the Weber number was shown to create the greatest effect on the dynamic contact angle. In all situations studied, an increase in the impact Weber number was observed to systematically reduce the dynamic contact angle, regardless of the other impact parameter values. In fact, the Liverpool team found that the effect of the diameter ratio and elastic modulus on spreading is limited.

Using a simple energy conservation approach to account for the energy dissipation via deformation of the substrate explains only a small portion of the experimental results. The group determined that this approach was not sufficient to explain, specifically, the maximum spreading length. This, and other factors, provokes new questions regarding drop impact on convex soft surfaces; however, the process is well on its way because of these scientists.

“There is a kind of new area that can be explored, this is the first work talking about impacts on soft spheres. This will hopefully encourage others to study these in greater detail, both experimentally and numerically,” Bertola said.