Researchers in Beijing have obtained new energy readings for cyanoacetylene molecules, with significant implications for understanding the electronic structure of organic molecules

WASHINGTON, D.C., August 4, 2015 — Researchers at Tsinghua University in Beijing have recently used a technique called zero-kinetic energy photoelectron spectroscopy to obtain a list in unprecedented detail of the quantum energy levels of the cyanoacetylene cation, a linear, five-atom molecule that exhibits nuclear and electronic coupling effects and is found in interstellar clouds and in the atmosphere of Saturn’s largest moon Titan.

When describing molecular motion, scientists generally assume that vibrational motion in the nucleus doesn’t have an effect on an atom’s electronic states due to the significant size disparity between electrons and particles in the nucleus — this is known as the Born-Oppenheimer approximation, and is a cornerstone of chemical physics. However, the approximation isn’t sufficient to describe the changes in energetic states for a number of photo-induced processes involving cyanoacetylene. By interrogating the energy structures of cyanoacetylene and a number of similar organic molecules, the Chinese researchers aim to contribute to a better understanding of these processes.

“[It] is an ideal tool to study the energy structure of the cation,” said Yuxiang Mo, a physics professor at Tsinghua University in Beijing, and primary investigator on the project. “At the present, there is no other experimental tool that can accomplish this task.” His group’s paper appears this week in The Journal of Chemical Physics, from AIP Publishing.

Exceptions to the Born-Oppenheimer approximation occur in linear, symmetric molecules with degenerate electronic states, such as cyanoacetylene (one hydrogen, one nitrogen, and three carbon atoms). Here, the nuclear and electronic motions are vibronically coupled, meaning a change in one will affect the other. This is known as the Renner-Teller effect. 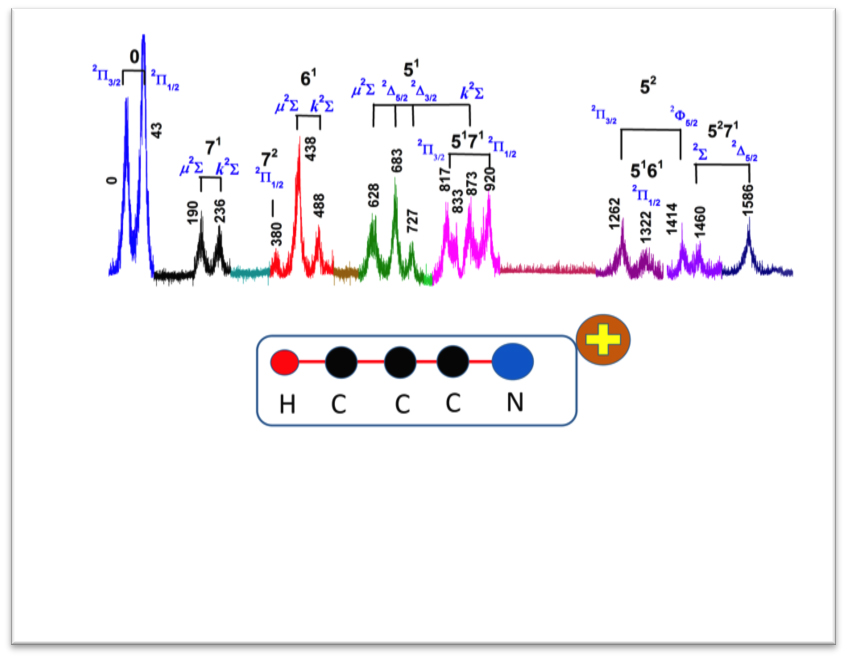 In their setup, the researchers used a tunable, nanosecond, pulsed vacuum ultraviolet laser to pump the sample cyanoacetylene molecules to highly electronically excited Rydberg states. The ions were consequently ionized by a very small, pulsed electric field, allowing them to be detected. The vacuum ultraviolet laser consisted of two laser beams focused on to a pulsed jet of xenon gas, a technique also known as the four-wave mixing method. By scanning the frequency of the vacuum ultraviolet laser — standard spectroscopic practice — they then obtained the energy levels of the ions.

This technique, known as zero-kinetic energy photoelectron, or ZEKE, spectroscopy, is well suited for measuring vibrational energy of cations. It has given the researchers a full, high-resolution readout of the energy levels for cations from their vibrational ground state to excited states several thousand wavenumbers, or magnitudes of frequency, higher, furthering their understanding of the coupled vibrations in the Renner-Teller effect.

The researchers found the ions’ energy levels to be in good agreement with the theoretical vibronic energy levels of the cyanoacetylene cation they obtained from a diabatic model, which are used to describe the electron and nuclear coupling effects in a quantum system. They also obtained a list of spin-vibronic energy levels for fluoromethane, chloromethane, and monochloroacetylene cations, which are highly symmetric or linear molecules that also have strong electron and nuclear coupling effects.

“From these results, it seems that now we understand the main physics of the vibronic coupling for these benchmark molecules,” Mo said.

Future work for Mo and his colleagues includes measuring the vibronic energy levels in more general situations, such as the accidental crossing of electronic potential energy surfaces.