Iowa State University scientists have developed a new formulation to explain an aspect of the self-assembly of nanoclusters on surfaces that has broad applications for nanotechnology.

WASHINGTON, D.C., September 6, 2016 — Scientists at Iowa State University have developed a new formulation that helps to explain the self-assembly of atoms into nanoclusters and to advance the scientific understanding of related nanotechnologies. Their research offers a theoretical framework to explain the relationship between the distribution of “capture zones,” the regions that surround the nanoscale “islands” formed by deposition on surfaces, and the underlying nucleation or formation process.

Nanotechnology involves science and engineering at the size of a nanometer, or a billionth of a meter. It has been central to the development of innovations like thin film solar panels, improved batteries and lower-cost sensors.

The self-assembly of atoms into nanoclusters is a subject of significant interest to nanotechnologists because it offers the potential to create nanostructured systems with enhanced magnetic, catalytic and plasmonic properties that have many industrial applications.

“If you have the ability to control these self-assembly processes to direct the morphology and spatial arrangement of these nanostructures, then you can enhance the properties that you’re interested in,” said James W. Evans, a professor of physics at Iowa State University.

Evans and his team, who were funded by the National Science Foundation, detail their approach this week in The Journal of Chemical Physics, from AIP Publishing.

While the physical science community had previously considered the size distribution of nucleated islands during the self-assembly of deposited atoms, more recent discussion has centered around the distribution of the islands’ capture zones. Evans and his collaborators focused on crafting a theoretical basis for understanding how small capture zones develop. Their development has important implications for determining the size that a nucleated island must reach to become stable. Their analysis combines rate equations with elements of stochastic geometry.

One of several significant insights that emerged from their research was the importance of the spatial location of nucleation events relative to existing capture zones and islands in the formation of new, smaller capture zones.

Evans and his team included a theoretical study on the capture zone distribution (CZD) of compact islands including a derivation of an equation for the scaling function of the capture zone distribution. In addition to the theoretical results, the authors included simulation results using Kinetic Monte Carlo to confirm the predictions of the island distribution and scaling behavior, obtaining in general good agreement between theoretical and numerical results. The formulations of Evans and co-workers highlights the importance of subtle spatial details of the nucleation process, and specifically of related quantities such as the intrinsic overlap probabilities and fractional overlap distribution. These quantities have received limited attention in the past but their detailed form is important as it impacts that of the CZD. 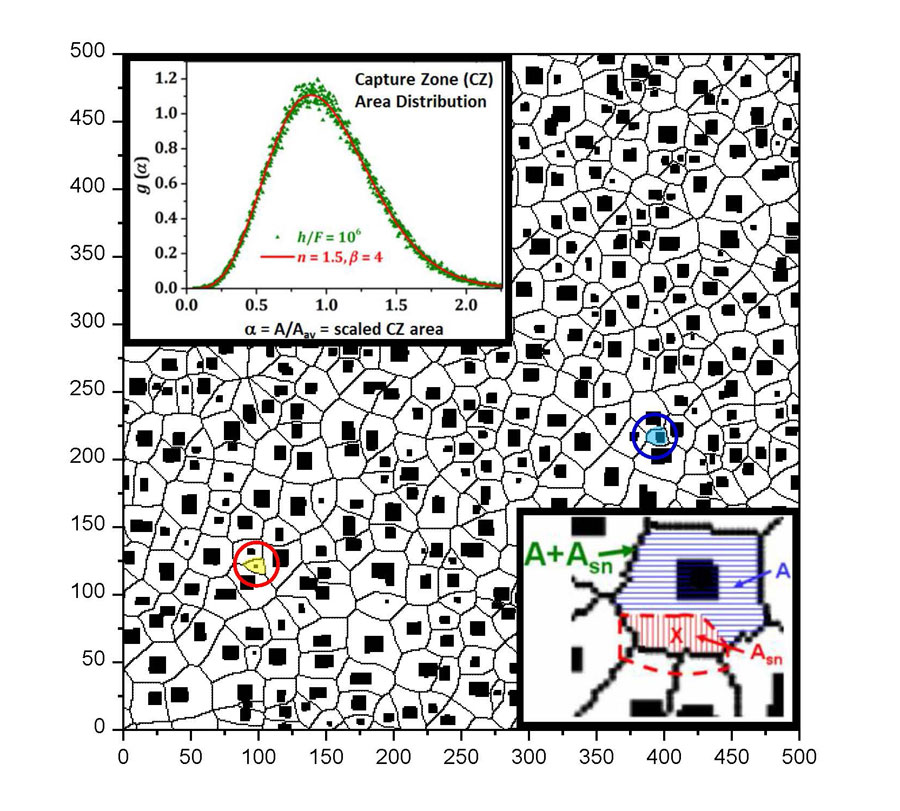 One of the challenges of this research is that it centers on a far-from-equilibrium system, which defies many of the conventional analytical methods utilized by physical scientists.

“The fact that this is a far-from-equilibrium system means that there aren’t standard theoretical tools that you can apply to analyze the process,” explained Evans.

Still, with extensive simulations that reflect deposition experiments typically conducted in ultrahigh vacuum chambers, Evans and his team have managed to develop a framework to explain how smaller capture zones are generated. The scientists hope that their work prompts other researchers to examine the question of capture zone area distributions as well because the collective insights generated will advance the broader scientific community’s understanding of how nanoclusters assemble.

This paper is part of a collection of papers to be published in a special issue of The Journal of Chemical Physics, from AIP Publishing. The issue, “Nucleation: New Concepts and Discoveries” with Guest Editors Kenneth Kelton and Daan Frenkel will be published in December 2016.