Inspired by similarities in water and light flow, researchers create an ultrasensitive optical microfiber coupler sensor that may find wide-ranging applications within and beyond the fields of chemical and biological sensing.

WASHINGTON, D.C., September 6, 2016 — When a river narrows or two rivers run into each other and merge, the water flow’s speed increases and it becomes much stronger. Water flow and light flow are similar in many ways, and this inspired a group of researchers from Nanyang Technological University in Singapore and the University of Nebraska–Lincoln to explore whether light flow within a waveguide — a linear structure that transports electromagnetic waves between endpoints — behaves in the same manner.

As the group reports in Applied Physics Letters, from AIP Publishing, they put this to the test by studying the infrared sensing performance of optical microfiber coupler sensors and ended up creating a sensor that’s about 20 times more sensitive than conventional optical-fiber-sensor-based biochemical sensors.

By using a clever approach to increase the sensitivity of the optical fibers to small index changes within the surrounding environment, small concentrations of molecules on or near the fiber’s surface can be detected. While the general idea is well known, this particular approach solves an existing sensitivity problem.

Interference is a common natural phenomenon at play within light, sound or even water waves when two or more waves are in the same space.

“In our work, two different optical guided modes in the microfiber coupler can be excited … and interference occurs when they propagate along the fiber,” Wei added.

Optical interference-based sensors are currently used for many applications within the field of biological measurement, and the use of optical fibers makes such devices extremely compact and economic.

“But a downside to most of the optical fiber biochemical sensors reported to date is that they exhibit high sensitivity only when the refractive index (RI) of the surrounding medium approaches that of an optical fiber (~1.44),” explained Wei. “In practice, biomolecules under detection are virtually prepared in the form of aqueous solutions that have a RI quite close to that of water (~1.33), so achieving high sensitivity for detection of trace analyte and small molecule is fundamentally challenging for fiber-based sensors.”

During the group’s study, they created an optical microfiber coupler sensor capable of achieving ultrahigh sensitivity “at low RI — around 1.33 — by precisely designing the parameter to minimize the difference between the effective group indexes of the ‘even supermode’ and ‘odd supermode,’” he added.

What’s a supermode? A typical optical microfiber coupler is comprised of two parallel, closely packed microfibers with two input (P1 and P2) and two output (P3 and P4) ports, two transition tapers, and a central uniform “waist-shaped” region. The modal fields injected from the input modes are known as “supermodes,” which include odd and even distributions. When even and odd supermodes propagate along the optical microfiber coupler, a power exchange occurs and the resulting interferometric spectrum can be obtained at its output ports. 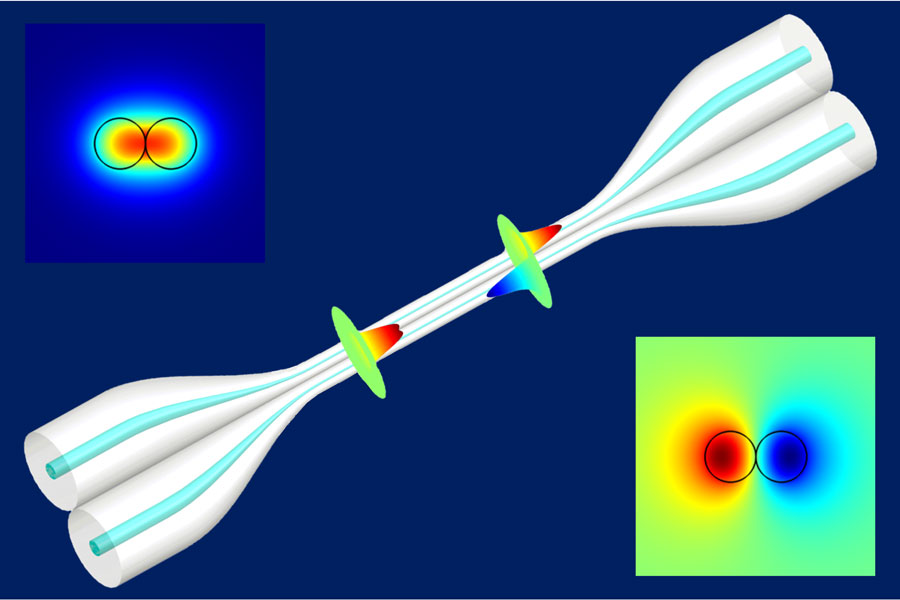 “The resulting ultrasensitive mechanism not only creates opportunities for a wide range of applications within chemical and biological sensing fields, but also broadens the repertoire of other interferometric fiber-optic sensors, and even acoustic sensors,” said Wei.

Thanks to its ultrahigh sensitivity, the group’s sensor is ideal for trace analyte and small molecule detection.

“It may also find applications within the fields of medical diagnostics and environmental monitoring, such as early detection of cancer and other diseases, as well as heavy metal detection in water,” Wei pointed out. “In the near future, we hope to develop it into a new sensing platform with ultrahigh sensitivity and a fast response time feasible for low-cost, point-of-care applications in doctors’ offices.”

The next step for the group is to “make the sensor into arrays and further explore its sensing performance for cancer biomarkers,” said Wei.