WASHINGTON D.C., April 18, 2017 — There are many processes, such as propulsion, in which fluid in a supercritical state, where the temperature and pressure put a substance beyond a distinguishable liquid or gas phase, is injected in an environment of supercritical thermodynamic conditions. Under these conditions, mixing and interaction dynamics do not behave as they would in their well-defined liquid or gas phases.

Rocket engines, gas turbines and diesel engines experience conditions in their combustion chamber that exceed the critical conditions of their fuel, and supercritical finely atomized sprays are used to coat tablets in the production of medicines. In both cases, understanding the precise dynamics of how the fluid breaks up and disperses can lead to fundamental improvements in the ways such systems are built.

The study of jet disintegration in particular focuses on fuel breakup and mixing within the combustion chamber of propulsion devices. A team of researchers at the University of Florida applied spectroscopic diagnostics techniques to learn more about the fundamentals of sub- and supercritical jet disintegration, and reports their new findings this week in the journal Physics of Fluids, by AIP Publishing.

“The Planar Laser Induced Fluorescence (PLIF) technique and the process of correcting for absorption effects is a tool that is unique to the Combustion and Propulsion Laboratory,” said Shaun DeSouza, a researcher at the University of Florida and lead author of the publication. “This method provides quantitative data for comparison with the qualitative data produced by the shadowgraph technique.” While imaging studies of jets have been performed by many different research institutions, there is limited quantitative density data reported in these studies.

To get that quantitative data, DeSouza and his collaborator ran 48 tests of jets injected from a single orifice into a chamber with one of a range of sub- to supercritical temperature and pressure combinations. They used a fluid called fluoroketone in these tests because of its low critical temperature and pressure, characteristics governing the supercritical behavior of interest, as well as its distinct spectral features well suited to PLIF detection.

The current study of single orifice jets injected into a chamber of sub- to supercritical temperatures and pressures was focused on the effect of the chamber-to-injectant density ratio on the jet disintegration with 48 tests run over an extensive density ratio range. For these tests, researchers used fluoroketone as the working fluid because it has a comparatively low critical temperature and pressure and a strong absorption in the near ultraviolet range making it a good choice for shadowgraph and PLIF visualization.

The results of the study demonstrated the accuracy of PLIF, imaging single planes of the flow field through the center of the jet, leading to noticeable differences in the measured spreading angle compared to shadowgraphy. Unlike shadowgraphy, which integratively images the entire jet, PLIF provides more detailed density information that illuminates features shadowgraphy can’t detect. 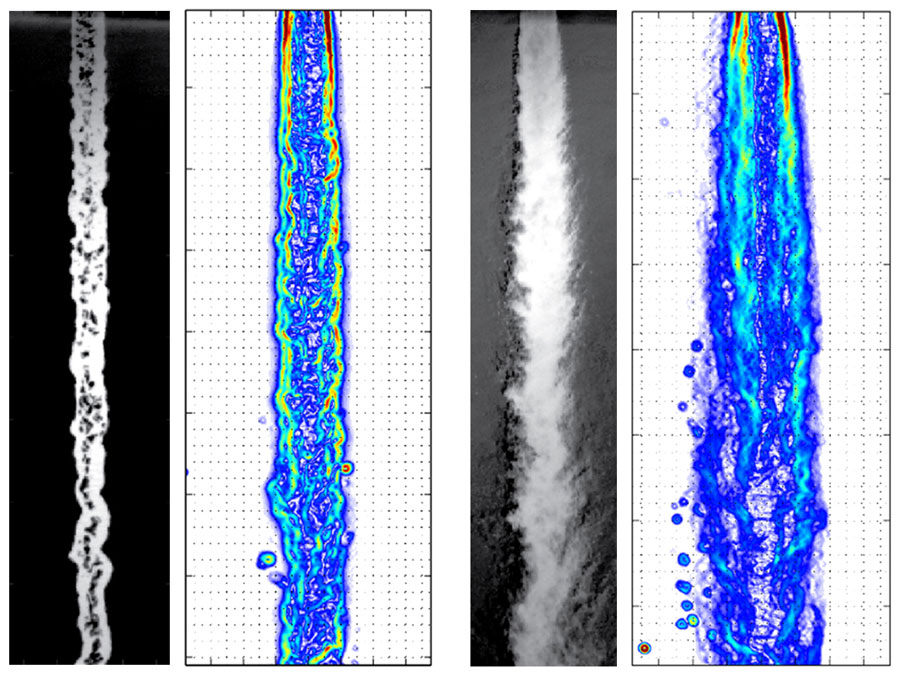 The results also revealed trends key to understanding and improving applications like jet propulsion, such as an increase in normalized drop diameter and a decrease in droplet population as chamber temperatures increased. According to the work, however, both droplet size and distribution were independent of chamber pressure.

“The next step for this line of research is to expand the thermodynamic conditions explored and to improve imaging hardware to gain a better understanding under a larger variety of conditions,” said DeSouza.