WASHINGTON, D.C., April 11, 2017 — A group of researchers at Zhejiang University’s State Key Laboratory of Fluid Power and Mechatronic Systems, in Hangzhou, China, recently discovered that a new bubbling mechanism may exist within the realm of physics.

They made this surprising finding while studying the bubbling phenomena in submerged gas-liquid jets in microchannels. The phenomenon occurred in an immersion lithography machine they had developed, causing vibrations that were damaging exposure quality.

As they report this week in the journal Physics of Fluids, from AIP Publishing, the group noticed that this bubbling possessed unique properties compared with bubbling generated by the single-phase gas-blowing mechanism. They describe both periodic and aperiodic bubbling characteristics changes, as well as special bifurcation and rotation phenomena, which haven’t previously been observed and reported.

“We realized that a new type of bubbling mechanism may exist, because the bubble detachment from the nozzle we were dealing with was driven not only by the ‘lift effect’ of buoyancy, but more significantly by the ‘pushing effect’ of the following liquid slug arriving at the nozzle,” said Liang Hu, an associate professor who works in the State Key Lab.

This explains the vibration characteristics found in the immersion lithography machine and may also have implications for other areas within physics such as mass or heat transfer enhancement and bubble motion control.

The discovery marks a significant advance because scientists have been exploring “bubbling” for many years, attempting to determine how bubbles detach from nozzles and rise within fluids.

“In the usual sense, bubbles detach from the nozzle one by one, driven by buoyancy, and rise vertically in a single chain,” Hu said. “Our work on the new type of bubbling revealed a brand new mechanism of bubble detachment — we discovered a surprising situation where bubbles rose along two differently oriented chains.” 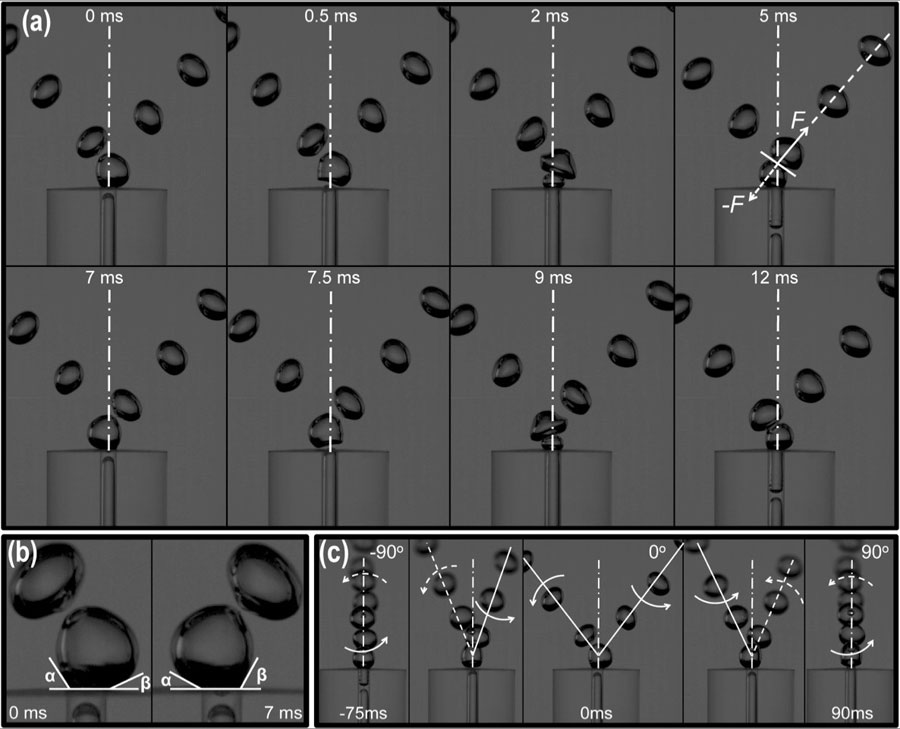 “In this situation, bubble detachment wasn’t induced primarily by buoyancy,” Hu said. “Instead, every bubble was forced to detach when a liquid slug arrived at the nozzle and destroyed the capillary action at the gas-liquid-solid three-phase contact line that attached the bubble to the nozzle.”

Figuratively speaking, bubble detachment was “caused by the liquid slug ‘pushing’ the bubble away from the nozzle,” Hu said. “The contact angle difference made the bubble detach ‘in turn’ from one side to the other, e.g. from left to right, resulting in the bubble base tilting from the upper left to the lower right. Then the successive bubble interacted with this bubble at its tilted base, and pushed it to rise toward the upper right.”

Further, this action caused an opposite contact angle difference on the successive bubble, which detached in turn from right to left and finally rose toward the upper left after interacting with the next bubble.

“As a result, individual bubbles didn’t rise vertically but rather rose toward a different orientation with respect to its previous bubble, which is known as bubble bifurcation,” Hu said.

In other words, “[The contact angle difference] was constantly passed from one bubble to its successive bubble by bubble interaction, which made the bubbles bifurcate into two branches spontaneously and stably obeying momentum conservation,” Hu said. “As long as the input conditions remain unchanged, the pair of bifurcating bubble branches continuously conveys rapidly rising bubbles and always maintains the same bifurcation angle, even when the branches rotate simultaneously. It looks like beautiful and precise bubble group dancing.”

As you can imagine, the group’s work has far-ranging applications. Bubble formation in submerged jets is widely used for industrial applications such as heat exchangers, artificial aeration and pneumatic steelmaking, to name a few.

Since bubbling was a major source of vibration within the group’s immersion lithography machine, which damages exposure quality, they’ll “now seek to confine the bubbling to the periodic regime for easier active vibration isolation,” Hu said.

Injecting gas-liquid mixtures, another application, has been used to improve heat and mass transfer by producing small bubbles and is considered to be an alternative to gas blowing with porous media.

“But most researchers opt to use a macrotube to produce dense bubbly jets,” Hu said. “So we believe replacing these with a bunch of microtubes that produce periodic bubbling may be a better choice for obtaining numerous bubbles, not only smaller but also controllable in size.”

Bubble motion control, yet another application, is needed for fabricating new materials as well as enhancing transfer properties of bubble columns, according to Hu.

“We can provide a new approach for bubble motion control by realizing the precise control of the bubble size and bifurcation angle simultaneously,” Hu said. “This may be a more efficient and reliable method to directly control the original bubbling dynamics than today’s commonly used external magnetic or acoustic fields.”

“The beauty and complexity of the bubble bifurcation phenomenon is fascinating to us, particularly for three aspects of future work,” Hu said when asked what the group hopes to work on next. “First, for obtaining a wider range of bifurcation angles: imagine two bubble branches acting like a pair of free-waving arms. Second, to fulfill the bifurcation process with microbubbles. And third, occasionally observed but poorly understood, bubbles could bifurcate into a branch of bigger bubbles and a branch of smaller bubbles. We’ll explore it all.”