WASHINGTON, D.C., April 10, 2017 — Computer electronics are shrinking to small-enough sizes that the very electrical currents underlying their functions can no longer be used for logic computations in the ways of their larger-scale ancestors. A traditional semiconductor-based logic gate called a majority gate, for instance, outputs current to match either the “0” or “1” state that comprise at least two of its three input currents (or equivalently, three voltages). But how do you build a logic gate for devices too small for classical physics? 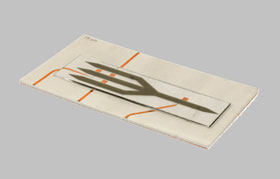 One recent experimental demonstration, the results of which are published this week in Applied Physics Letters, from AIP Publishing, uses the interference of spin-waves — synchronous waves of electron spin alignment observed in magnetic systems. The spin-wave majority gate prototype, made of Yttrium-Iron-Garnet, comes out of a new collaborative research center funded by the German Research Foundation, named Spin+X. The work has also been supported by the European Union within the project InSpin and has been conducted in collaboration with the Belgian nanotechnology research institute IMEC.

“The motto of the research center Spin+X is ‘spin in its collective environment,’ so it basically aims at investigating any type of interaction of spins — with light and matter and electrons and so on,” said Tobias Fischer, a doctoral student at the University of Kaiserslautern in Germany, and lead author of the paper. “More or less the main picture we are aiming at is to employ spin-waves in information processing. Spin waves are the fundamental excitations of magnetic materials.”

So instead of using classical electric currents or voltages to send input information to a logic gate, the Kaiserslautern-based international team uses vibrations in a magnetic material’s collective spin — essentially creating nanoscale waves of magnetization that can then interfere to produce Boolean calculations.

“You have atomic magnetic moments in your magnetic material which interact with each other and due to this interaction, there are wave-like excitations that can propagate in magnetic materials,” Fischer said. “The particular device we were investigating is based on the interference of these waves. If you use wave excitations instead of currents […] then you can make use of wave interference, and that comes with certain advantages.”

Using wave interference to produce the majority gate’s output provides two parameters to use in controlling information: the wave’s amplitude, and phase. In principle, that makes this concept more efficient also since a majority gate can substitute up to 10 transistors in modern electronic devices.

“The device we were investigating consists of three inputs where we excite waves and they combine,” Fischer said. “Depending on the input phases where you encode the information, that determines the phase of the output signal, hence, defining the logic output state ‘0’ or ‘1’. That is actually information processing and that’s what we want.”

This first device prototype, though physically larger than what Fischer and his colleagues see for eventual large-scale use, clearly demonstrates the applicability of spin-wave phenomena for reliable information processing at GHz frequencies. 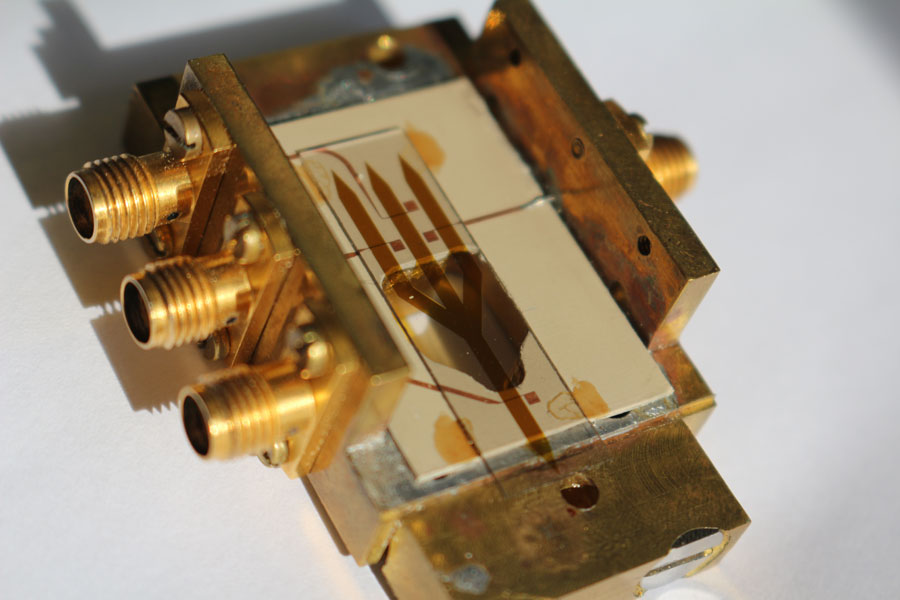 Because the wavelengths of these spin waves are easily reduced to the nanoscale, so too (though perhaps not quite as easily) can be the gate device itself. Doing so may actually improve the functionality, reducing its sensitivity to unwanted field fluctuations. Besides, nano-scaling will increase spin-wave velocities that will allow for an increase in computing speed.

“What we aim for is the miniaturization of the device, and the smaller you make the device, the less sensitive it becomes to these influences,” Fischer said. “If you look at how many wavelengths fit into this propagation length, the fewer there are, the less influence a change of the wavelength has on the output. So basically downscaling the device would also come with more benefits.”

Furthermore, much like antennae, a single device can be operated at multiple frequencies simultaneously. This will allow for parallel computing using the same “core” of a future spin-wave processor.

“One of my colleagues in Kaiserslautern is into spin-wave multiplexing and de-multiplexing,” Fischer said. “We are also going in that direction, to use multiple frequencies and that would be a good compliment […] to this majority gate.”