WASHINGTON, D.C., April 4, 2017 — The performance of electronic devices is constrained by their inability to evenly dissipate the waste heat they produce. Since the waste heat isn’t uniformly distributed, hotspots are all too prevalent in electronics. While a few options for hotspot cooling do exist, they don’t work well for mobile hotspots, which move according to ever-changing computing tasks or power-amplification demands.

But that’s about to change thanks to the work of a group of researchers from Duke University and Intel Corp. In the cover article appearing this week in the journal Applied Physics Letters, from AIP Publishing, they report a “jumping droplet” technique designed specifically to address mobile hotspots.

This technique is based on a discovery made in the lab of Chuan-Hua Chen, an associate professor and Alfred M. Hunt Faculty Scholar in the Department of Mechanical Engineering and Materials Science at Duke University.

Chen’s group observed that when two water droplets merge together on a water-repellant (superhydrophobic) surface, the merged droplet spontaneously jumps perpendicular to that surface. They further established that the out-of-plane jumping motion is driven by surface energy initially stored on the droplets and released upon drop coalescence. This effect, which they demonstrated in a vapor chamber, can locally cool hot spots.

“When a hotspot appears on the superhydrophilic surface saturated with water, it drives the working fluid to vaporize,” Chen said. “The water vapor condenses on the opposing superhydrophobic surface, and rejects the waste heat. As condensate droplets grow and merge, the coalescence-induced jumping motion returns the working fluid back to the superhydrophilic surface. This ‘jumping return’ enables continuous operation of the vapor chamber to dissipate heat.”

The main advantage of the jumping droplet technique is “its mechanism to perpendicularly return the working fluid to the hotspots,” Chen said. “And because jumping droplets are driven by intrinsic surface energy, the technique is independent of external forces and gravitational orientation.”

Flat-plate heat pipes are remarkable for their removal of heat through horizontal spreading which is much more effective than high thermal conductivity copper or even diamond heat sinks, but they lack a vertical mechanism to dissipate heat.

“Our technique not only retains the high effectiveness of flat-plate heat pipes for in-plane heat spreading, but also provides a much better capability for out-of-plane heat transport because of the perpendicular jumping mechanism,” Chen said. 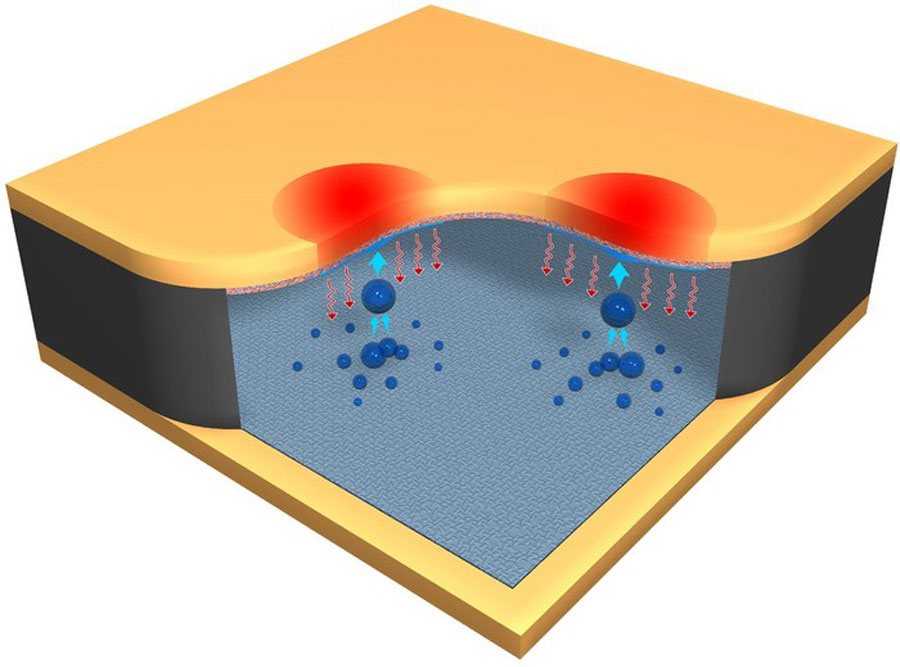 The combination of horizontal and vertical spreading is ideal for heat dissipation. As an analogy: “to avoid flooding, it’s useful to spread the rain horizontally over a large area. But if the ground becomes soaked and water has no vertical pathway to escape, flooding is inevitable,” Chen said. “Our jumping droplet technology addresses this technological void with a vertical heat spreading mechanism, opening the door to outperforming the best solid heat spreaders in all directions.”

Because the performance of computers and power electronics depends so heavily on their ability to dispose of heat waste, this new method could enable faster computing and longer lifetimes for electronics. Going forward, they are looking at material choices to best exploit their new technique.

“It’s technically challenging to design a jumping droplet vapor chamber with materials of opposite wettability that are compatible with high-temperature vapor,” Chen said. “We’ll fine-tune material choices so that our system can stably work at higher temperature with more effective heat dissipation. We’ve already demonstrated a cooling performance comparable to copper, but I see a pathway to significantly exceed this industrial standard once we sort out the material issue.”