Now a group of researchers at Hendrix College in Conway, Arkansas has built a much smaller ring laser interferometer to explore how it could detect geophysical effects such as earthquake-generated ground rotation and infrasound from convective storms and have demonstrated the technology’s potential as an early-warning system for natural disasters.

Interferometers — invented by Albert Michelson, who was awarded the 1907 Nobel Prize in physics for his work — use a semi-transparent mirror to divide a beam of uniform light waves. Once divided, the different light waves are routed along different paths and then recombined. After recombination, an interference pattern of alternating bright and dark fringes is created. The fringes move in response to any changes between the two path lengths.

More than 55 years later, ring laser interferometers were developed that could measure frequencies’ proportional rotation — instead of fringe shifts.

This week in the Journal of Applied Physics, from AIP Publishing, the Hendrix College researchers report the results they obtained from detecting and analyzing atmospheric infrasound — sound waves with frequencies below the lower limit of human hearing.

“We essentially verified many of the results from a long-term study by the U.S. National Oceanic and Atmospheric Administration (NOAA) — but we substituted a ring laser in place of microphones,” said Robert Dunn, professor of physics at Hendrix College.

The group’s ring laser was able to “clearly show the frequency spectrum of the infrasound,” he said. Specifically, they were able to detect infrasound from tornadoes 30 minutes before the tornado funnel was on the ground. The group also determined that infrasound from a tornado can travel 1,000 kilometers — which confirms earlier studies by NOAA.

How does their ring laser work? It’s a bit complex, but to detect rotation via a ring laser, “a plasma tube projects a laser beam in both a clockwise and counterclockwise direction,” Dunn explained. “If the laser cavity is rotating clockwise, it takes longer for a photon moving in the clockwise direction to go around the circumference of the cavity because it’s chasing mirrors. Moving counterclockwise, the photon’s path is shorter because it encounters mirrors. The speed of light is constant, so a path length difference exists between the beam moving clockwise vs. the one moving counterclockwise. The path length difference in turn creates a frequency difference.”

When the clockwise and counterclockwise beams are combined, “it creates a ‘beat note’ that’s proportional to rotation,” he continued. “The Earth is always rotating, so a horizontal ring laser mounted away from the equator will measure its rotation.” 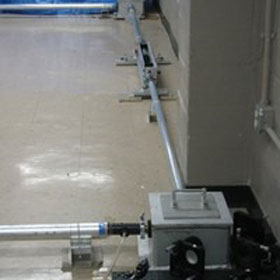 “This means that infrasound entering the laser cavity perturbs it and will frequency-modulate the beat note produced by Earth’s rotation,” Dunn explained.

“The detection of infrasound 30 minutes before a tornado is on the ground, in conjunction with Doppler radar, could prove very useful as an early warning system,” Dunn pointed out. “And the ability to detect the rotational components of earthquake-generated seismic waves may help reduce the damage from earthquakes … because building codes often neglect the effects of ground rotation.”

“Volcanic ash can destroy jet engines, so the ability of an array of ring lasers to detect volcanic eruptions in remote locations like the Aleutian Islands could help to ensure the safety of commercial aircraft that regularly fly over the region,” he added.

Dunn stressed that, at this point, all of their results “must be considered preliminary,” and that the group’s goal is to “continue exploring how ring lasers can help reduce the impact of natural hazards.”

Detection of atmospheric infrasound with a ring laser interferometer

Hendrix College and University of Memphis