Bundles of microtubes formed by peptides can convert thermal energy into electrical energy.

WASHINGTON, D.C., October 4, 2016 — Many peptides and proteins have an innate ability to assemble into long, slender fibers called fibrils and other shapes. Now, researchers have found a way to harness this property to create tubular structures of diphenylalanine that have the ability to convert thermal energy into electrical energy, also called a pyroelectric effect. Their results, published this week in Applied Physics Letters, from AIP Publishing, report that these nanoscale polymers, which are biocompatible, could have a wide range of biological applications such as for drug delivery scaffolds or miniature implantable sensors.

The team of researchers from Istanbul Technical University in Turkey, the University of Aveiro in Portugal, and Ural Federal University in Russia relied on diphenylalanine, a material they have previously studied for its unique electromechanical and physical properties. When drops of a solution of diphenylalanine are dried, peptide monomers form elongated hollow tubes that are structurally similar to the insoluble fibers formed by Aβ -amyloid peptide in Alzheimer’s disease.

“Diphenylalanine is one of the first self-assembling organic materials that can be used to make microscopic tubes, rods, ribbons, spheres and more,” said Andrei Kholkin, corresponding author on the study. “In the presence of water, its chemical groups self-organize to make noncovalent bonds and form amazingly rigid, cytoskeleton-like structures.”

The team of investigators dried a standard peptide solution for a day at room temperature to allow diphenylalanine to assemble into microtube structures, with individual tubes up to 1 millimeter long and 1-3 micrometer wide in diameter. To increase the current produced by the structures, the group created bundles of several microtubes and placed them between needle electrodes to measure the structures’ properties.

They heated the structures periodically with a laser, changed the temperature to reach approximately 80 degrees C and then calculated the pyroelectric coefficient, which is a measure of how effectively a material can convert heat into electric energy. Although the microtubes’ pyroelectric capacity was initially changeable — once heated and cooled, the coefficient decreased by ~30 percent — they remained stable after the first heating. The change may be because heating caused water molecules within the hollow tubes to become disordered, the authors suggest. 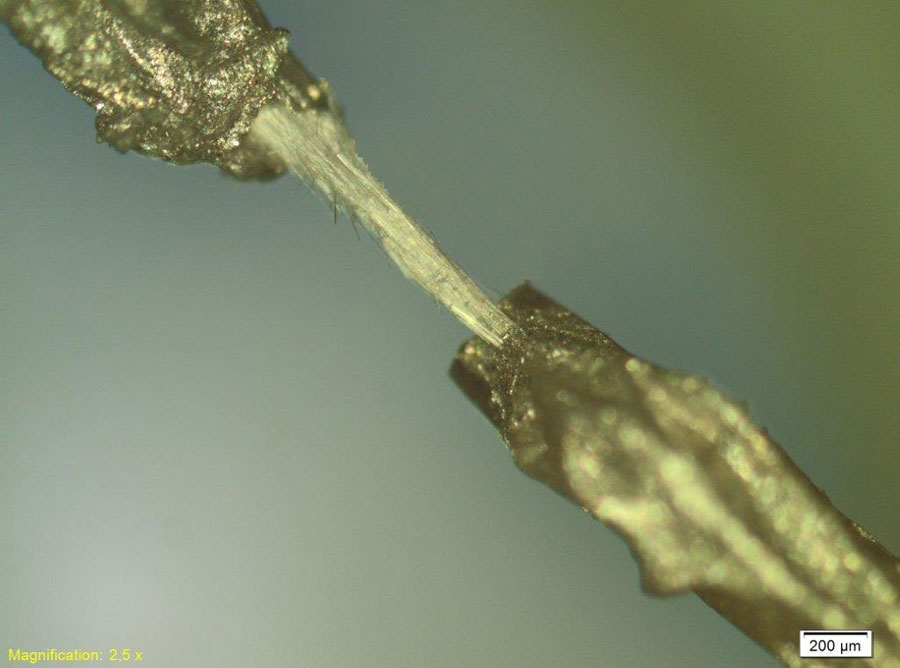 “This is the first observation of a significant pyroelectric effect in peptide microtubes similar to what’s seen with semiconductor materials such as zinc oxide or aluminum nitride,” Kholkin said. “In principle, our peptide nanotubes can be used in the same manner as these materials for various applications.”

In previous studies, the group has demonstrated that these nanotubes have piezoelectric effects — that is, they convert mechanical forces into electrical signals — and could be used as sensors for pacemakers or other small-scale electronic devices.

The newly discovered pyroelectric properties will broaden the potential uses for diphenylalanine microtubes, according to Kholkin. For example, the structures could be used to create small-scale thermal energy harvesters, which could scavenge energy lost in microelectronic devices. In addition, their pyroelectric properties could be used to engineer microscale and nanoscale thermometers that sense temperature variation, rather than the absolute temperature of a cell.

“Because these tubes can generate electricity under temperature and motion changes, they can be used to stimulate and monitor living cells,” Kholkin said.