Washington, D.C., Dec. 2, 2015 – Hybrid optoelectronic devices based on blends of hard and soft semiconductors can combine the properties of the two material types, opening the possibility for devices with novel functionality and properties, such as cheap and scalable solution-based processing methods. However, the efficiency of such devices is limited by the relatively slow electronic communication between the material components that relies on charge transfer, which is susceptible to losses occurring at the hybrid interface.

A phenomenon called Förster resonant energy transfer (FRET) was recently theoretically predicted and experimentally observed in hybrid structures combining an inorganic quantum well with a soft semiconductor film. Förster resonant energy transfer is a radiationless transmission of energy that occurs on the nanometer scale from a donor molecule to an acceptor molecule. The process promotes energy rather than charge transfer, providing an alternative contactless pathway that avoids some of the losses caused by charge recombination at the interface.

Now researchers from the University of Cyprus and Cyprus University of Technology, along with colleagues from the University of Crete, Greece have conducted a comprehensive investigation on how various structural and electronic parameters affect FRET in structures of nitride quantum wells with light-emitting polymers. Based on their studies, the researchers discuss the process to optimize the energy transfer process and identify the limitations and implications of the Förster mechanism in practical devices. The work demonstrates the importance of understanding FRET in hybrid structures that could pave the way for developing novel devices such as high-efficiency LEDs and solar cells. The researchers present their work in a paper published this week in The Journal of Chemical Physics, from AIP Publishing.

“Pioneering theoretical and experimental work has demonstrated that energy can be efficiently transferred across hybrid semiconductors via the Förster mechanism. However, our understanding is not complete and many material and structural parameters affecting FRET in such hybrids remain unexplored. Our work employs for a first time a comprehensive approach that combines fabrication, theoretical modeling and optical spectroscopy to fully understand FRET in a nitride quantum well-polymer hybrid structure,” said Grigorios Itskos, the primary researcher and an assistant professor from the Department of Physics at the University of Cyprus.

“We used a systematic approach to optimize the FRET efficiency by tuning various parameters of the nitride quantum well component. The process allowed us to study unexplored aspects of the mechanism and identify competing mechanisms that limit the energy transfer efficiency in hybrid planar structures. The outcome of our investigation can guide future efforts towards a rational design of hybrid geometries that can optimize FRET and limit competing losses to render FRET-based devices feasible,” he said.

Itskos noted that the researchers chose to study structures based on nitrides because the material is well-researched and is used in niche applications such as blue light emitting LEDs. “However, the functionality [of nitride structures] can be further increased by combining them with other soft semiconductors such as light-emitting polymers. The spectral tunability and high light-absorption and emitting efficiency of the polymers can be exploited to demonstrate efficient down-conversion of the blue nitride emission, providing a scheme for efficient hybrid LEDs,” Itskos said.

In the study, the researchers initially sought to produce and study near-surface nitride quantum wells to allow a close proximity with the light-emitting polymer deposited on their top surface.

“The nanoscale proximity promotes efficient interactions between the excitations of the two materials, leading to fast Förster transfer that can compete with the intrinsic recombination of the excitations,” Itskos explained. Förster resonant energy transfer is a strongly distance-dependent process which occurs over a scale of typically 1 to 10 nanometers. The contactless pathway of energy transmission could avoid energy losses associated with charge recombination and transport in hybrid structures.

Using a sequence of growth runs, theoretical modeling and luminescence spectroscopy (a spectrally-resolved technique measuring the light emission of an object), the researchers identified the way to optimize the surface quantum well emission. 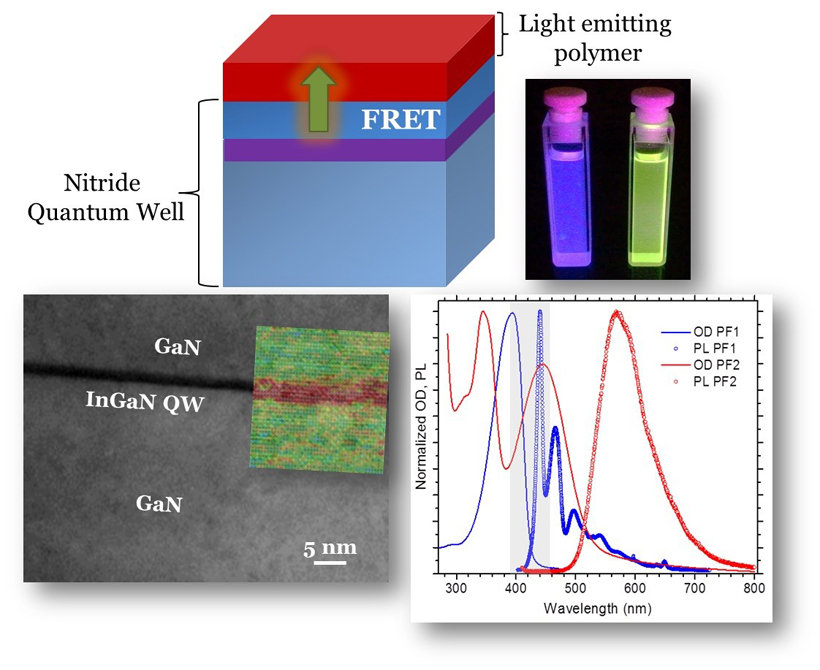 “Our studies also indicated that electronic doping of the interlayer between the nitride quantum well and the polymer film reduces the efficiency of FRET. This constitutes a potential limitation for the implementation of such hybrid structures in real-world electronic devices, as electronic doping is required to produce efficient practical devices. Further studies are needed to establish the exact influence of doping on FRET,” Itskos noted.

He said the team’s next step is to perform a systematic study of hybrid structures based on doped nitride quantum wells to investigate the mechanisms via which electronic doping affects the characteristics of the Förster resonant energy transfer.