WASHINGTON, D.C., December 8, 2015 – Winter is coming, promising the usual bouts of frozen precipitation for northern locations. The slickness of snow and ice is a big pain if you’re driving, flying or walking, but can be a lot of fun if you strap on a pair of skis.

Bo Persson, a scientist at the Jülich Research Center in Germany, has come up with a new theory that describes how slippery ice gets when a hard material like a ski slides across it. The theory agrees well with experimental data and could help to design better sliding systems, for example the aforementioned skis. It could also contribute to a fundamental understanding of ice friction that could help explain the movement of glaciers and other natural processes.

Persson reports his results in The Journal of Chemical Physics, from AIP Publishing.

Saying that ice is slippery is just another way of saying that it has low friction, but predicting ice friction is no easy task.

Ice by itself is not inherently slippery, but it gets so when a thin layer of water forms on the surface. The water can appear when heat from friction melts the ice, or via a natural solid to liquid phase transition, called premelting, that occurs near the surface even at temperatures well below the bulk freezing temperature of water. (This premelting was first observed more than 150 years ago when the British scientist Michael Faraday touched two ice cubes together and saw that they stuck. He concluded there was a liquid-like layer on the surface of the ice that froze when the two cubes came into contact.)

Complicating the study of ice friction even further is the fact that the contact between the ice and a sliding object occurs at the interface between two solids, which is called a buried interface.

“It is nearly impossible to study directly at the molecular level what happens at the buried interface,” Persson said. This is because the solid material blocks the contact area and you cannot scatter particles like ions or electrons from the interface to study it, like you could for a free surface.

Although premelting of the top layer of a free ice surface has been studied extensively both theoretically and experimentally, the extent to which the results apply to the buried contact area between ice and other solid materials is not clear, Persson noted. 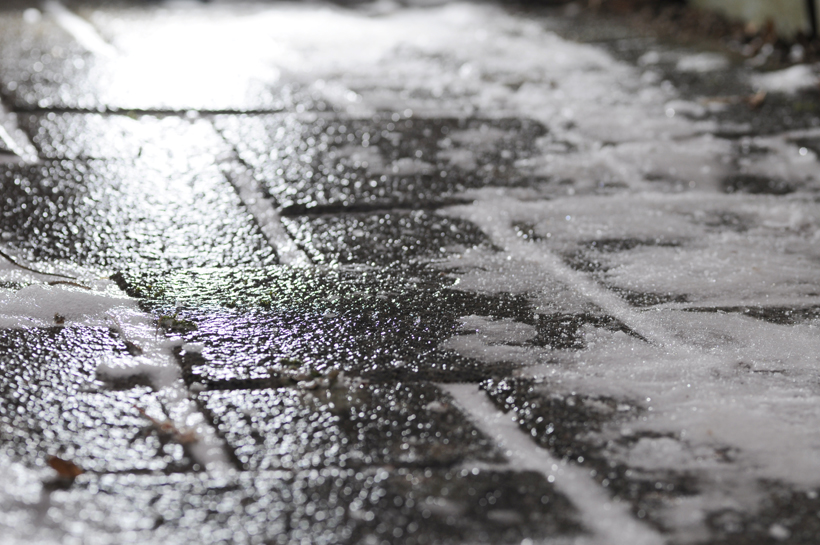 There is, however, a wide range of experimental data that shows how temperature and sliding speed affect friction on ice. Persson’s main breakthrough was to connect a theoretical description of ice friction to the experimental data. He did this by developing an equation that describes ice’s frictional shear stress, which is the stress the material experiences in the area of real contact from a force parallel to the surface (such as that caused by a sliding ski).

The equation shows how the shear stress depends on the ice temperature at the surface. The equation suggests that, like the free surface, the buried ice interfaces may also exhibit premelting behavior.

“The most important result is that I have constructed a phenomenological shear stress law which is able to explain ice friction as a function of sliding speed and temperature in a wide velocity and temperature region,” Persson said.

The findings contribute to a better understanding of the physical origin of friction on ice, which Persson said is his main interest. Most recently he has extended his exploration to rubber on ice friction, which is important for designing winter tires and shoes. When rubber slides across ice the deformation of the rubber plays an important role in determining the friction.

Ultimately, the work could help everyone enjoy the winter weather more, whether you want to walk safely across ice in your shoes or slide with abandon on a sled or a pair of skis.