Using molecular dynamics simulations, researchers in New Mexico show that the shift in the glass transition temperature of a confined liquid (relative to a bulk liquid) can be approximately predicted.

This makes the ability to approximate glass transitions for confined geometries in polymers highly desirable. And now, as a group of researchers from the University of New Mexico and New Mexico Institute of Mining and Technology reports in this week’s issue of The Journal of Chemical Physics, from AIP Publishing, they’ve developed a simple formula to do just that.

“With the development of nanotechnology, polymers have found many applications that require their use in ‘confined geometries’ such as narrow channels, small pores, and thin films,” explained the study’s co-author John Curro, an adjunct professor at New Mexico Institute of Mining and Technology

Over the past 20 years, experiments have shown that when polymers are used in a confined geometry, their glass transition “isn’t necessarily the same as for the corresponding ‘unconfined’ or bulk polymer,” Curro said. “It’s usually lowered, as is the case for free-standing films with two free surfaces, but it can also increase for liquids against strongly attracting substrates.”

The shift in glass transition depends sensitively on film thickness — the thinner the film the greater the effect. “This shift can be extraordinarily large,” Curro said. “For example, the glass transition temperature of a 20-nanometer polystyrene film has been measured as much as 70 C lower than bulk polystyrene. Clearly, this thin film of polystyrene is no longer a hard plastic material.”

As far as potential applications, “the fact that polymer properties in confined geometries are different than in bulk could have important implications for photolithography, nanocomposites, micromachines, and lab-on-a-chip devices,” Curro said.

So why is the glass transition of a confined polymer different than that of its corresponding bulk material?

“We hypothesized that it’s due to a density effect,” Curro said. “In an unconfined bulk liquid, the density is constant throughout the sample. By contrast, a confined liquid’s density of molecules is nonuniform because of constraints imposed by geometry.” 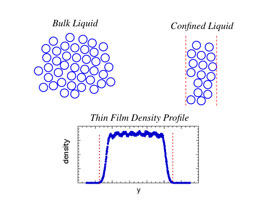 So the group explored whether the glass transition temperature of a confined liquid would be the same as a hypothetical bulk polymer — not at its normal bulk density, but rather at a density equal to the average density of the confined polymer.

To put it to the test, they wanted to measure both the density profile and glass temperature on the same thin film. Such measurements would be difficult to carry out in the laboratory.

“Our approach was to use ‘molecular dynamics’ computer simulations to study thin liquid films consisting of short chain molecules,” Curro said. “We also performed computer simulations of the corresponding bulk system. This allowed us to compare the glass transition temperatures of thin films of various thicknesses with the bulk glass transition temperature on the same model chains.”

It’s also important to note that the group’s results only apply to low molecular weight polymers and small molecule glasses.

The glass transition temperature of thin films: A molecular dynamics study for a bead-spring model

University of New Mexico, and the New Mexico Institute of Mining and Technology