Cleaning lab equipment leads to the discovery of Leidenfrost behavior of acetone droplets on the surface of water, and surprising effects of drag and self-propulsion, studied for the first time by a research collaboration in Japan

WASHINGTON, D.C., March 14, 2017 — In doing his due diligence, cleaning his lab equipment, fluid physicist Stoffel Janssens from the Mathematical Soft Matter Unit in the Okinawa Institute of Science and Technology (OIST), Okinawa, Japan, took notice of the unusual interaction between the water and acetone droplets floating over the water surface as the droplets made their way to the drain.

“I noticed that sometimes, droplets briefly hover above the surface of a liquid before coalescing with the liquid,” Janssens said. “Being intrigued by this phenomenon, I performed a literature study from which I concluded that a thin layer of gas between a droplet and a liquid surface can prevent coalescence.”

In other words, what Janssens noticed was the acetone droplets were not mixing with the water because of their own form of the Leidenfrost effect, more commonly observed in water droplets on solid hot surfaces. In the case of water, the droplets float on a layer of steam formed where they meet the hot surface. Janssens and colleagues at OIST and the National Institute for Materials Science, both in Japan, studied the fluid dynamics of this interaction, and of the self-propulsion common to the Leidenfrost effect (which has its own name, Marangoni effect) to learn more about the underlying mechanics. Their surprising results appear this week in the journal Physics of Fluids, by AIP Publishing.

Normally, acetone (the main component in most nail polish removers) and water are miscible, meaning that, unlike oil and water, they intermix and do not separate or form droplets when mixed.

“Acetone has a boiling point of 56°C, well below that of water, and therefore evaporates strongly when it approaches a hot water surface,” Janssens said. “I hypothesized that strong evaporation might create a gas layer between an acetone droplet and a water surface to suppress coalescence.” 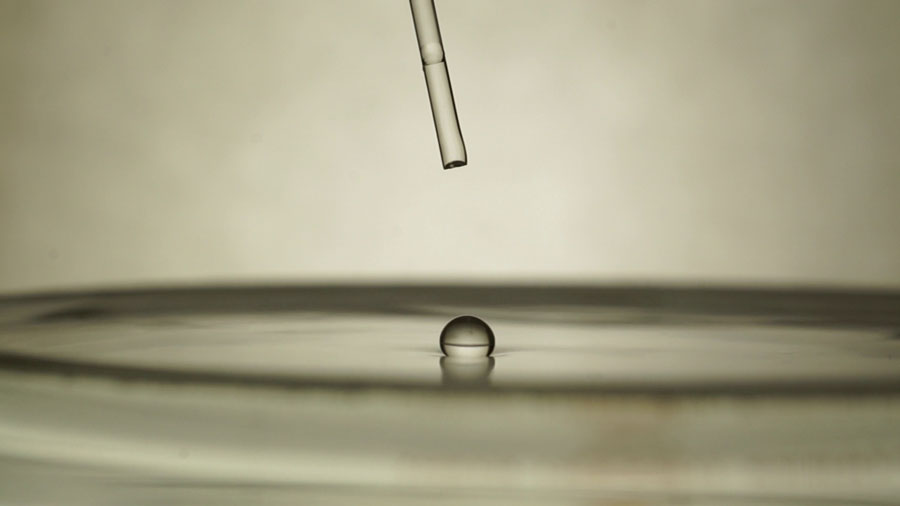 Janssens and his co-authors used high-speed videography to study the room-temperature droplet dynamics and their underlying mechanisms, looking closely at variables such as droplet size and velocity of self-propelled droplets. When they did, they found some unexpected behaviors.

“After analyzing movies obtained with high-speed camera imaging, I also noticed that a self-propelled droplet gradually becomes immersed beneath the undisturbed water surface,” Janssens said. “This immersion starts when a droplet has a horizontal speed of about 14 cm/s. Finally, after carefully measuring the displacement of several droplets, we concluded that immersion causes drag.”

They discovered the acetone droplets would propel themselves across the water’s surface until reaching a velocity that would pull them under the surface, still in droplet form, where they then experience drag from the surrounding water.

“This type of drag by immersion is, to the best of our knowledge, not described in the literature and it is important to take into account when measuring drag on small objects supported by a liquid-gas interface,” Janssens said. “Moreover, water walking creatures such as water striders, water spiders, and rove beetles might exploit drag by immersion for locomotion.”

“We observed that a droplet accelerates faster with increasing horizontal speed up to the point that immersion occurs,” Janssens said. “This initial runaway effect might be interesting for future research which involves self-propulsion driven by a Marangoni effect.”

By comparing their data to theoretical models, Janssens and his colleagues developed a strategy for estimating the thickness of droplets’ supportive vapor layer. However, there is still a lot more to understand about the unusual system and Janssens’ team is still hard at work on this.

“Since there are many phenomena in this work which are poorly understood, there is a lot of work to be done,” Janssens said. “I have controlled experiments designed to deepen our understanding of non-coalescence.”