A group of researchers has shown that the simple curvature of nanomagnets can be used to induce textures within the magnetization field -- a potential boon for future random access memory devices and data storage.

WASHINGTON, D.C., March 21, 2017 — While the ability to easily control the magnetic properties of small electronic systems is highly desirable for future small electronics and data storage, an effective solution has proven to be extremely elusive.

But now, a group of researchers from universities in Chile and Brazil are reporting this week in the Journal of Applied Physics, from AIP Publishing, a simple way to gain control of magnetism that starts by controlling the shape of the systems.

Based on the fact that the curvature of nanomagnets induces chiral (asymmetric) textures within the magnetization field, the researchers — from Chile’s Pontificia Universidad Católica de Chile and Universidad de Chile, and Brazil’s Instituto Federal de Educação, Ciência e Tecnologia Baiano and Universidade Federal de Viçosa — established a new method to produce stable vortices and antivortices via nanomagnets with variable curvature.

Their work involves showing that a magnetization configuration consisting of two structures of opposite winding numbers — vortex and antivortex — will appear as remanent states within hollow toroidal (think doughnut-shaped) nanomagnets. These topological configurations are the result of chiral interaction induced by curvature.

As you may have guessed, magnetization is the central concept of the group’s work.

“If you look at a typical household magnet you’ll see clearly defined north and south poles,” said Vagson Carvalho-Santos, a professor and researcher at the Instituto Federal de Educação, Ciência e Tecnologia Baiano. “Our system, a magnet of very small dimensions, can be thought of as an aggregate of tiny magnets — but with magnetic poles that change from one point to the other.”

This array of north-south orientations, known as magnetization, can display interesting and beautiful shapes. “Vortex-like structures — swirling textures — appear within the magnetization as a consequence of curvature of the system,” Carvalho-Santos said. “In our simulations, we observed the formation of such structures when a magnetic field was applied to a curved magnetic nanoparticle.”

The group’s discovery “points toward stable textures with vortex-like structures, which are stabilized by the shape of the system,” Carvalho-Santos said. “This is surprising because, in general, the effect of the geometry involved has been studied only for the dynamical properties of the magnetic system. Our finding of static and stable configurations is likely to be beneficial for information storage technologies.” 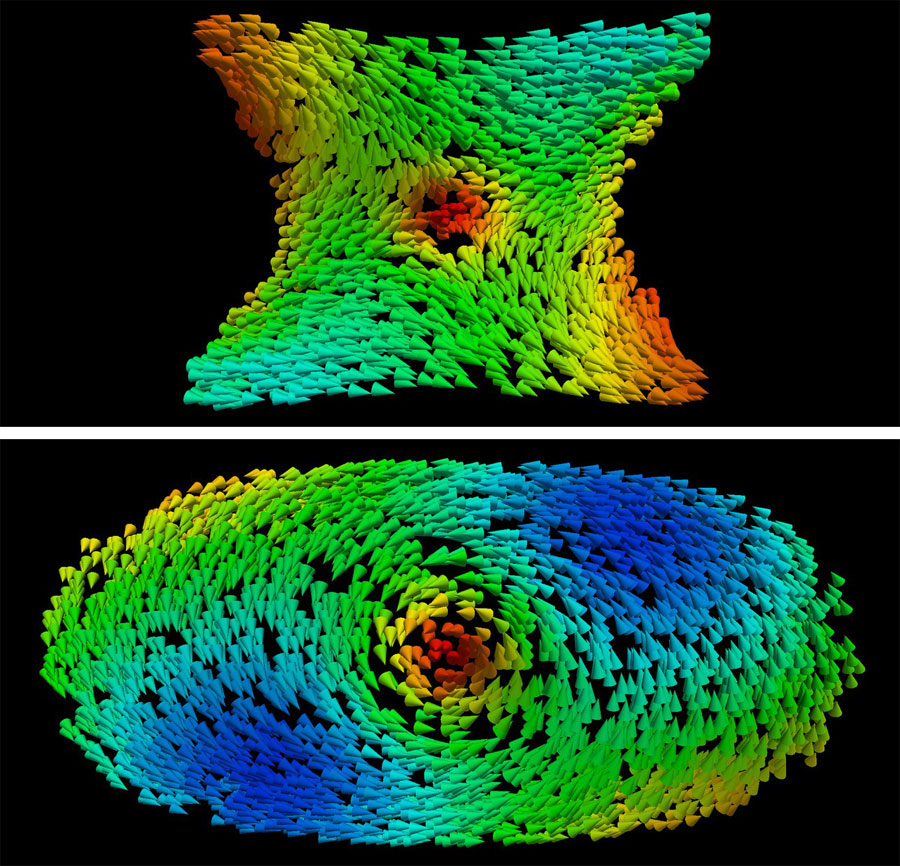 In terms of these types of future applications, “the stabilization of a vortex-antivortex pair is one more collective mode of magnetization that can be added to the ‘zoo’ of the particle-like configurations appearing in condensed matter systems, such as transversal and vortex domain walls, skyrmions (point-like region of reversed magnetization within a uniform magnet), isolated vortices, etc.,” Carvalho-Santos said. This means that these structures can be considered as a basis for future data storage and random access memory devices.

Beyond this, “if such a vortex-antivortex pair can be moved by applying a magnetic field or a spin-polarized current, it can be considered for creating devices based on the concept of ‘race-track memory,’” Carvalho-Santos said. Due to the small size of the resulting configuration, such structures can enable storing information within a small region of a storage device.

“Our main interest now is to learn how to gain control over these structures and how to move them, which is of great importance for using them in future technological applications,” Carvalho-Santos said. “One possibility is to control their position via electric currents.”