WASHINGTON D.C., July 15, 2014 – Using a newly developed, ultrafast femtosecond infrared light source, chemists at the University of Chicago have been able to directly visualize the coordinated vibrations between hydrogen-bonded molecules — the first time this sort of chemical interaction, which is found in nature everywhere at the molecular level, has been directly visualized. They describe their experimental techniques and observations in The Journal of Chemical Physics, from AIP Publishing.

“These two-dimensional infrared spectroscopy techniques provide a new avenue to directly visualize both hydrogen bond partners,” said Andrei Tokmakoff, the lab’s primary investigator. “They have the spectral content and bandwidth to really interrogate huge parts of the vibrational spectrum of molecules. It’s opened up the ability to look at how very different types of vibrations on different molecules interact with one another.”

Tokmakoff and his colleagues sought to use two-dimensional infrared spectroscopy to directly characterize structural parameters such as intermolecular distances and hydrogen-bonding configurations, as this information can be encoded in intermolecular cross-peaks that spectroscopy detects between solute-solvent vibrations.

“You pluck on the bonds of one molecule and watch how it influences the other,” Tokmakoff said. “In our experiment, you’re basically plucking on both because they’re so strongly bound.”

Hydrogen bonds are typically perceived as the attractive force between the slightly negative and slightly positive ends of neutrally-charged molecules, such as water. While water stands apart with its unique polar properties, hydrogen bonds can form between a wide range of molecules containing electronegative atoms and range from weakly polar to nearly covalent in strength. Hydrogen bonding plays a key role in the action of large, biologically-relevant molecules and is often an important element in the discovery of new pharmaceuticals.

For their initial visualizations, Tokmakoff’s group used N-methylacetamide, a molecule called a peptide that forms medium-strength hydrogen-bonded dimers in organic solution due to its polar nitrogen-hydrogen and carbon-oxygen tails. By using a targeted three-pulse sequence of mid-infrared light and apparatus described in their article, Tokmakoff’s group was able to render the vibrational patterns of the two peptide units.

“All of the internal vibrations of hydrogen bonded molecules that we look at become intertwined, inextricably; you can’t think of them as just a simple sum of two parts,” Tokmakoff said. 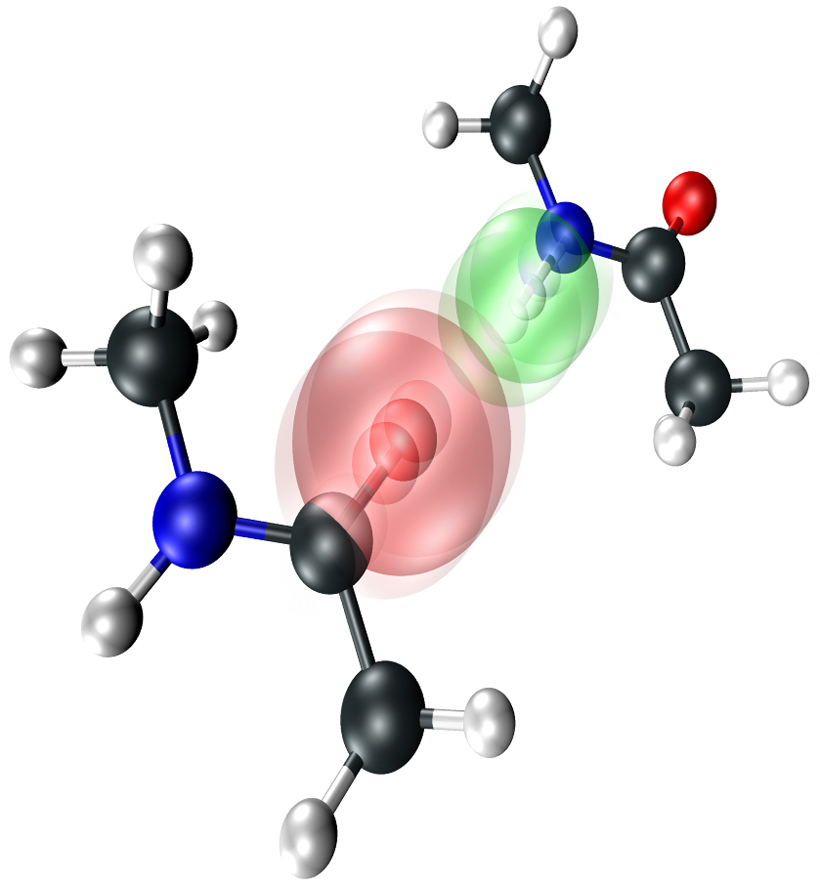 Future work in Tokmakoff’s group involves visualizing the dynamics and structure of water around biological molecules such as proteins and DNA.

“You can’t just think of the water as sort of an amorphous solvent, you really have to at least on some level think of it atomistically and treat it that way,” Tokmakoff said. “And if you believe that, it has huge consequences all over the place, particularly in biology, where so much computational biology ignores the fact that water has real structure and real quantum mechanical properties of its own.”

Massachusetts Institute of Technology and the University of Chicago