New experiments demonstrate the potential for diamond as a material for spintronics. 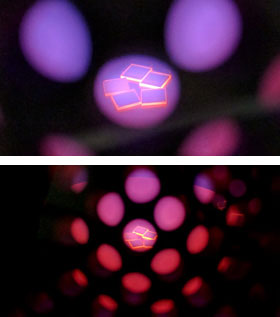 WASHINGTON, D.C., January 29, 2018 — Conventional electronics rely on controlling electric charge. Recently, researchers have been exploring the potential for a new technology, called spintronics, that relies on detecting and controlling a particle’s spin. This technology could lead to new types of more efficient and powerful devices.

In a paper published in Applied Physics Letters, from AIP Publishing, researchers measured how strongly a charge carrier’s spin interacts with a magnetic field in diamond. This crucial property shows diamond as a promising material for spintronic devices.

Diamond is attractive because it would be easier to process and fabricate into spintronic devices than typical semiconductor materials, said Golrokh Akhgar, a physicist at La Trobe University in Australia. Conventional quantum devices are based on multiple thin layers of semiconductors, which require an elaborate fabrication process in an ultrahigh vacuum.

“Diamond is normally an extremely good insulator,” Akhgar said. But, when exposed to hydrogen plasma, the diamond incorporates hydrogen atoms into its surface. When a hydrogenated diamond is introduced to moist air, it becomes electrically conductive because a thin layer of water forms on its surface, pulling electrons from the diamond. The missing electrons at the diamond surface behave like positively charged particles, called holes, making the surface conductive.

Researchers found that these holes have many of the right properties for spintronics. The most important property is a relativistic effect called spin-orbit coupling, where the spin of a charge carrier interacts with its orbital motion. A strong coupling enables researchers to control the particle’s spin with an electric field.

In previous work, the researchers measured how strongly a hole’s spin-orbit coupling could be engineered with an electric field. They also showed that an external electric field could tune the strength of the coupling.

“The coupling strength of carrier spins to electric and magnetic fields lies at the heart of spintronics,” Akhgar said. “We now have the two crucial parameters for the manipulation of spins in the conductive surface layer of diamond by either electric or magnetic fields.”

Additionally, diamond is transparent, so it can be incorporated into optical devices that operate with visible or ultraviolet light. Nitrogen-vacancy diamonds — which contain nitrogen atoms paired with missing carbon atoms in its crystal structure —  show promise as a quantum bit, or qubit, the basis for quantum information technology. Being able to manipulate spin and use it as a qubit could lead to yet more devices with untapped potential, Akhgar said.