A new way of modifying the dipole moment of cholesteric liquid crystals allows for researchers to select between the different band-edge modes experimentally for the first time.

WASHINGTON, D.C., January 24, 2018 — Since lasers were first developed, the demand for more adaptable lasers has only increased. Chiral nematic liquid crystals (CLCs) are an emerging class of lasing devices that are poised to shape how lasers are used in the future because of their low thresholds, ease of fabrication, and ability to be tuned across wider swaths of the electromagnetic spectrum. New work on how to select band-edge modes in these devices, which determine the lasing energy, may shine light on how lasers of the future will be tuned.

The laser cavities are formed of a chiral nematic liquid crystal doped with a fluorescent dye. The liquid crystal creates a photonic bandgap in the laser cavity. An international team of researchers demonstrated a technique that allows the laser to electrically switch emission between the long- and short-wavelength edges of the photonic bandgap simply by applying a voltage of 20 V. They report their work this week in Applied Physics Letters, from AIP Publishing.

“Our contribution is to find a way to change the orientation of the transition dipole moment of the gain medium [the fluorescent dye] in the CLC structure and achieve mode selection between long- and short-wavelength edges without tuning the position of the photonic bandgap,” said Chun-Ta Wang, an author of the paper. “We also demonstrated a polymer-stabilized CLC system, which improved the laser’s stability, lasing performance and threshold voltage.”

CLC lasers work through a collection of liquid crystals that self-assemble into helix-shaped patterns, which then act as the laser’s cavity. These helices are chiral, meaning they corkscrew in the same direction, which allows them to be tuned across a wide range of wavelengths. While many lasers, like the laser diodes used in DVD players, are fixed at one color, many CLC lasers can be tuned to multiple colors in the visible light spectrum and beyond. 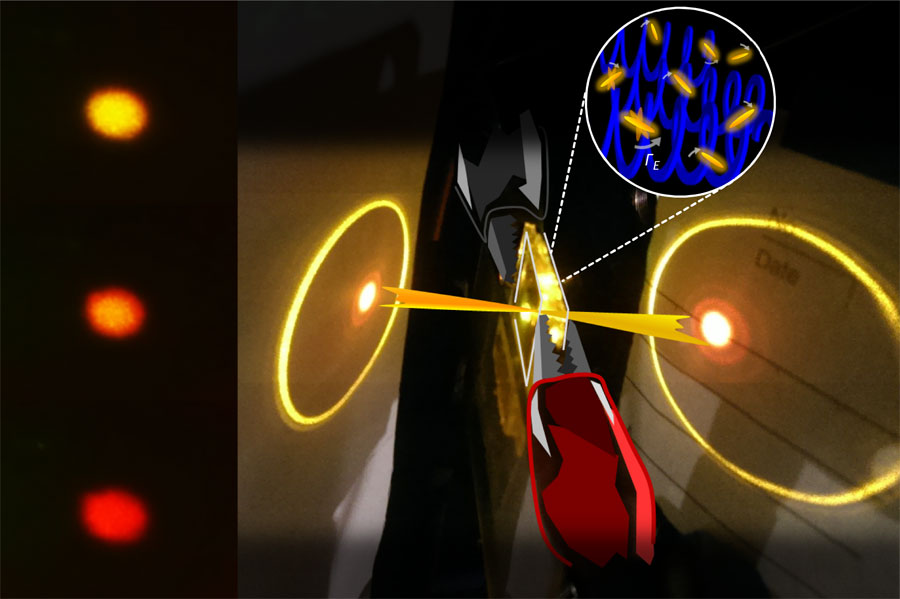 In addition to tuning the lasing wavelength, one hot area of inquiry is in finding different ways of tuning the wavelength by switching the lasing mode from one edge of the photonic bandgap to the other. Some attempts so far have suggested it is possible to switch between the long- and short-wavelength edges.

Wang’s team’s work demonstrates that this mode switching is possible by applying a direct-current electric field to the fluorescent dye, altering its order parameter without affecting the spectral position of its bandgap. The researchers tested three mixtures by varying ratios of liquid crystals and dyes and recording their laser outputs through fiber-optic spectrometry.

They found that it was possible for all the samples to shift from lasing at the short-wavelength edge to lasing at the long-wavelength edge, a shift of nearly 40 nanometers, with as little as 20 volts. Moreover, a polymer-stabilized planar CLC sample was able to leverage its extra structural stability to reversibly switch between the two modes and showed improved performance and threshold voltage.

“There have been many calculations for how to achieve this phenomenon in this field, but to our knowledge, this is the first time it was proven experimentally,” Wang said.

Looking ahead, Wang said widespread use of CLC lasers is still slated for the future. In the meantime, he and his team are hoping to expand our understanding of electrically assisted band-edge mode selection in other types of photonic crystals.