Data transmission studies in the terahertz region show promise to expand the spectrum available for use.

WASHINGTON, D.C., February 6, 2018 — The world is running out of bandwidth to support our growing communication demands. This is in part due to “internet of things” technologies which make everything from your toaster to your front door accessible online, and have driven an explosion in data traffic. A new range of frequencies in the terahertz (THz) region of the spectrum may soon be available for use. A paper appearing this week in APL Photonics, from AIP Publishing, demonstrates the feasibility of using THz carrier waves for data transmission in diverse situations and environments, including non-line-of-sight applications where waves bounce off, or are reflected by, walls and other objects.

Daniel Mittleman of Brown University, whose group led the study, said, “We’re not the first group to study the feasibility of THz wireless links, either indoors or outdoors, but there have been few comprehensive studies.” Many researchers in the field have believed that links that rely on indirect, or non-line-of-sight pathways, are impossible. “Our work shows that this isn’t necessarily the case,” he said.

THz radiation has frequencies higher than 95 gigahertz (GHz), beyond which the US Federal Communications Commission (FCC) has yet to establish service rules. Bandwidth in this region of the spectrum could be available for use in future wireless technologies, but little is known about power requirements, architectures, hardware or other basic issues for such data carrier waves.

THz radiation is about 100 times higher in frequency and, thus, higher in photon energy than typical wireless carrier waves like Bluetooth or standard Wi-Fi are. Some have expressed concern about the safety of this type of radiation, but because these waves are not likely to penetrate deeply into tissue, particularly at the powers used in wireless applications, most believe safety will not be an issue.

Mittleman’s group measured data transmission at 100, 200, 300 and 400 GHz using a link with a data transfer rate of 1 gigabit per second in a variety of real-life environments. They set up a THz transmitter that used a frequency multiplier chain to up-convert a modulated base signal to the desired frequency. They also placed a receiver downstream, around various indoor and outdoor obstacles, to detect the pulsed signal. Outdoor measurements were enabled by an experimental license granted by the FCC. 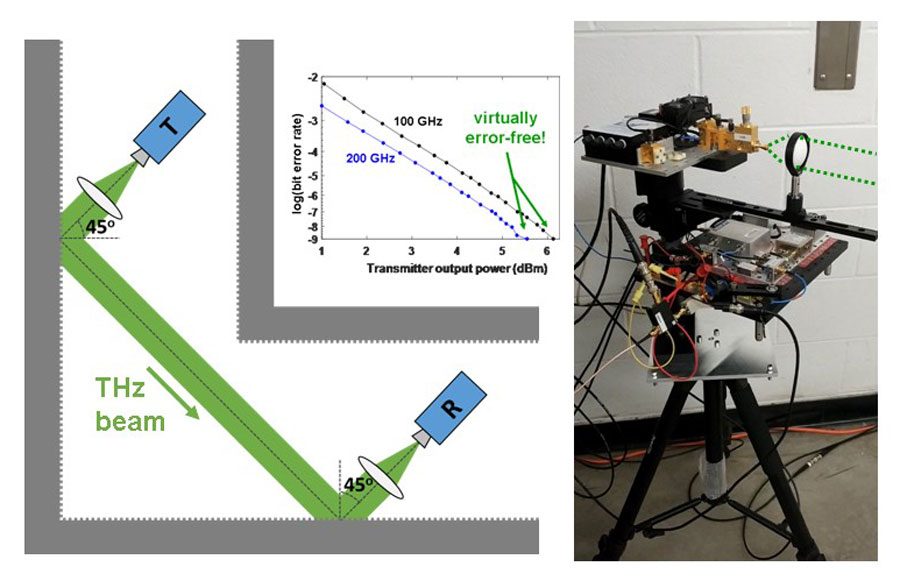 When the THz signal was pointed directly at the receiver, it produced a line-of-sight measurement. Alternatively, the signal could also be forced to reflect from, or bounce off, objects before detection. These non-line-of-sight experiments used real-life objects, including a painted cinder block, a door, metal foil, and a smooth metal plate, to reflect the signal.

In a key experiment, the signal source and receiver were placed where they could not see each other. The signal was bounced off an intervening wall twice and easily detected by the receiver. This study demonstrated that, contrary to prior expectations, non-line-of-sight use is possible for this type of carrier wave, and that THz radiation may play a role in future wireless technologies.