From the Journal: Journal of Physical and Chemical Reference Data

WASHINGTON, D.C., July 14, 2015 — The fundamental constants that govern the laws of nature are being determined with increasing accuracy, according to a review paper published this week in Journal of Physical and Chemical Reference Data, from AIP Publishing.

The paper outlines the proceedings from this year’s Workshop on the Determination of the Fundamental Constants, where an international community of physicists and metrologists convened to share their research into an array of fundamental constants. Ultimately, better definitions of these constants will aid in the effort to redefine several standard scientific units, including the kilogram and the Kelvin, by 2018.

Fundamental constants describe a variety of physical properties in the world around us. Planck’s constant, for example, governs the relationship between energy and frequency. The fine-structure constant explains the strength of electromagnetic interaction between charged particles. Fundamental constants such as these underlie the development of much of today’s technology, from atomic clocks to GPS systems.

They are also linked to the International System of Units (SI), the standard measurement system used throughout the scientific community and in most countries around the world. By defining units like the meter in terms of fixed fundamental constants such as the speed of light, we ensure that they remain the same over time.

However, some SI units, like the kilogram, still rely on a physical standard — in this case, a platinum-iridium cylinder housed in France. Now that scientific research is carried out across the globe, relying on a single physical standard is somewhat limiting, as mass standards in other countries must be periodically calibrated against the original. In addition, the standard itself is subject to changes in mass over time.

To make the system more consistent and accessible, the international metrology community plans to redefine all SI units in terms of fundamental constants by 2018. Before we can redefine an entire system of units, though, it is important to be certain that the fundamental constants upon which the definitions depend are as accurate and precise as possible. And since different measurement procedures or data collection techniques can yield slightly different results, pinning down the exact values of these constants can be a surprisingly fussy business.

“The objective of the SI is to provide the best possible standards, and the redefinition will be a step in that direction,” said Peter Mohr, a researcher at the National Institute for Standards and Technology (NIST). 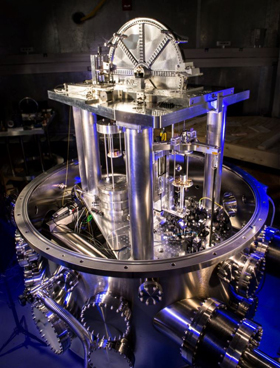 Luckily, some of the values for previously-contested constants appear to be converging. For instance, the recent workshop highlighted advances in the determination of the Bolzmann constant k, which explains the relationship between temperature and particle energy. Under the new SI system, the fixed Bolzmann constant will be used to define the Kelvin, the SI unit of temperature.

Planck’s constant has also seen marked progress. “The Planck constant was problematic in the past, as there were disagreeing values obtained by different experiments. However, the values seem to be converging to a sufficiently reliable value for the redefinition of the SI to move forward,” said Mohr. Planck’s constant will eventually be fixed and used to define the kilogram.

“The new definitions will make many of the physical constants that are measured now exact in the future. Others, although not exact, will be more accurate,” said Mohr. “This will stabilize the values of the constants and provide accurate measurement standards.”

The 2015 workshop provided input to the latest adjustment of the official values for a number of fundamental physical constants, now available online. This adjustment is not the final one before the official SI redefinition in 2018, but it’s still an important step forward. Growing consensus on the values of certain fundamental physical constants suggests that we may be almost ready to fix their values and move to a more reliable and streamlined measurement system.

Advances in determination of fundamental constants

Journal of Physical and Chemical Reference Data is published by AIP Publishing for the National Institute of Standards and Technology (NIST). The objective of the journal is to provide critically evaluated physical and chemical property data, fully documented as to the original sources and the criteria used for evaluation, preferably with uncertainty analysis.