The most sensitive commercial magnetometers require near absolute zero temperatures, but researchers have now built a device with superior performance at a relatively balmy 77 K

WASHINGTON, D.C., October 20, 2015 – Magnetoencephalography, or MEG, is a non-invasive technique for investigating human brain activity for surgical planning or research, and has been used in hospitals and universities for more than 30 years. It’s just one of the many powerful technologies made possible by a tiny device called a SQUID, short for superconducting quantum interference device. SQUIDs can detect minuscule magnetic fields, useful in applications ranging from medical imaging of soft tissue to oil prospecting.

The most sensitive commercial magnetic sensors require a single SQUID kept at 4.2 Kelvin — an incredibly chilly temperature that is usually maintained with expensive and difficult to handle liquid helium. Now researchers from Loughborough University and Nottingham University, both in the United Kingdom, have built a multi-SQUID device that can operate at 77 K — the boiling temperature of liquid nitrogen, a much cheaper coolant. The new device still outperforms most standard 4.2 K SQUID magnetometers. The team reports their results this week in the journal Applied Physics Letters, from AIP Publishing. 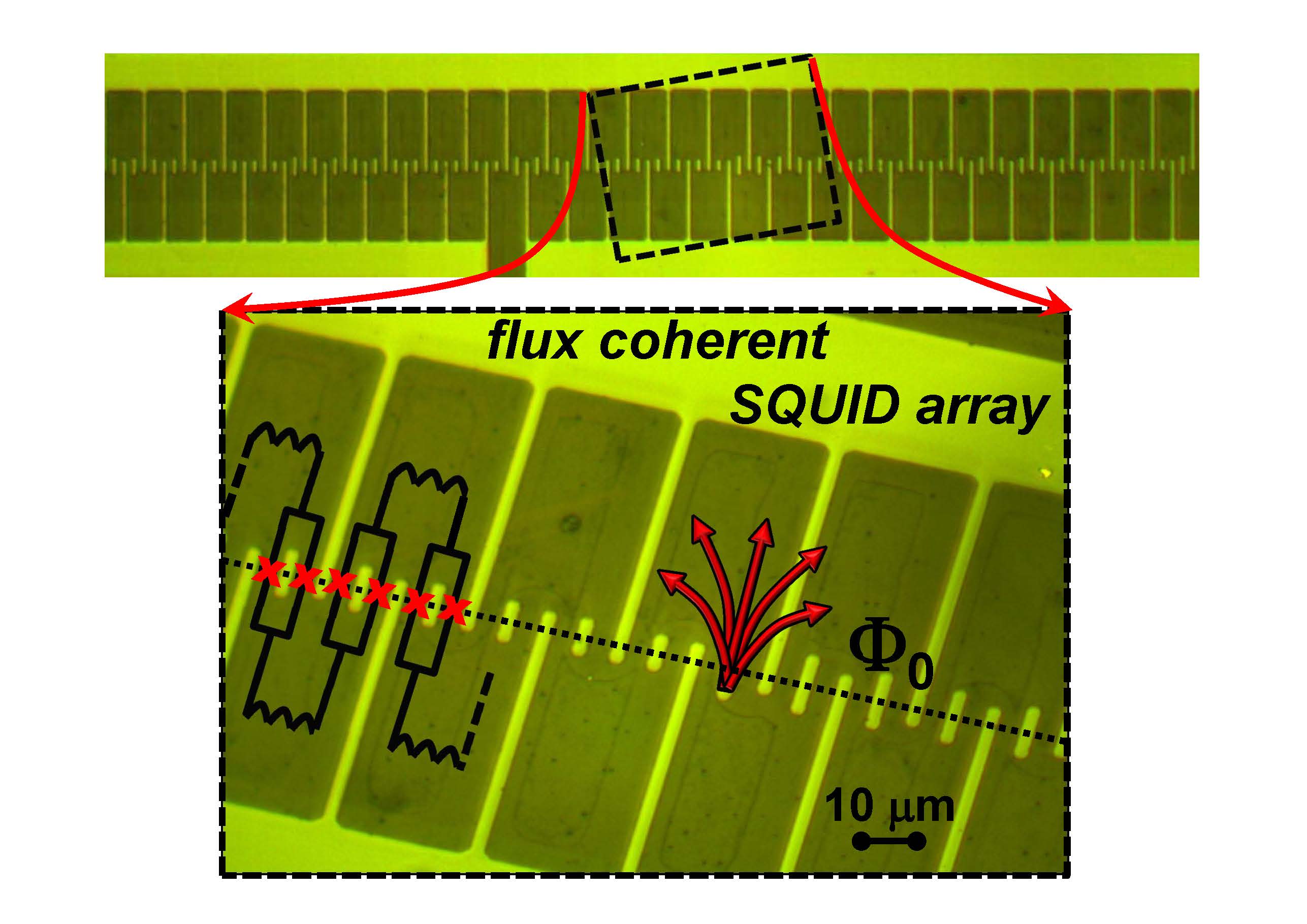 “We believe there should be an immediate interest in the entire SQUID community for the potential replacement of their existing superconducting magnetic sensors based on single SQUIDs operating at 4.2 K with our SQUID arrays operating at 77 K,” said Boris Chesca, a physicist at Loughborough University and first author on the new paper.

SQUIDs work by converting a measure of magnetic intensity called flux into a voltage. If you string together a series of SQUIDs the voltage output scales in direct proportion to the number of SQUIDs, while the noise in the measurement only increases as a square root of the SQUID count. Therefore, the more SQUIDs you have, the stronger the signal, and the more sensitive the measurement that can be performed.

The catch is that the approach only works if all the SQUIDs experience the same magnetic flux (a condition called flux coherency) and the interaction between each SQUID and its neighbors is minimized — both tricky conditions to meet because of parasitic fluxes that form during normal SQUID operation. “Flux coherency could never be reached in the previous approaches in large SQUID arrays with more than 30 SQUIDs” Chesca noted.

The key difference in the array that Chesca and his colleagues designed has to do with a feature called a flux focuser. Flux focusers are large areas of superconductor that improve magnetic field sensitivity and minimize parasitic fluxes. In previous SQUID arrays, there were either no flux focusers or the flux focusers were so large that they limited the number of SQUIDs that could be integrated onto a single chip.

In the new design, the flux focusers are narrow, but long. By keeping the width of the focusers identical to the SQUIDs’ width, the researchers could easily string together an arbitrarily long series of SQUIDs while still achieving a high degree of flux coherence and field sensitivity by increasing the length of the flux focusers.

Chesca and his colleagues tested the performance of their arrays (one 770 SQUIDs-long and the other 484 SQUIDs-long) and compared them to the performance of optimized low temperature single-SQUIDs operating at 4.2 K — generally the gold standard for industrial magnetometers. They found that the new arrays’ white flux noise, a key performance parameter linked to sensitivity, were superior to those of the 4.2 K SQUIDs.

“Since our SQUID arrays operate at 77 K using liquid nitrogen, they provide a magnetic sensor that is very cost effective, considering that operation of SQUIDs at 4.2K requires the use of liquid helium-4, which is much more expensive and also requires extensive training for its handling,” Chesca said.  He also noted that the price of helium-4, which is a common isotope of helium, is rapidly increasing and its availability may soon be limited to conserve strategic supplies. Liquid nitrogen, on the other hand, is much more readily available and is already used on a daily basis in colleges and universities around the world.

Chesca and his colleagues are currently working on optimizing the shape and design of the SQUID arrays to maximize their magnetic field sensitivity. “The most exciting aspect of our result is that replacing single-SQUIDs operating at 4.2 K with SQUID arrays operating at 77K would be, for the first time, not only a cheaper and more user-friendly solution, but a solution that comes with no compromise regarding noise resolution,” Chesca said.