Tiny, luminescent nanostructures may prove to be useful in highly sensitive magnetic sensors or within the realm of quantum computing.

WASHINGTON, D.C., October 20, 2015 – Standard umbrellas come out when the sky turns dark, but in the nanoworld, umbrella shapes may be the next creative way to enhance light emission. Inspired by recent work to enhance the luminescence from diamond nanopillar structures, a team of researchers in Japan has discovered that “umbrella-shaped” diamond nanostructures with metal mirrors on the bottom are more efficient photon collectors than their diamond nanostructure “cousins” of other shapes.

By tweaking the shape of the diamond nanostructures into the form of tiny umbrellas, researchers from Tokyo Institute of Technology experimentally showed that the fluorescence intensity of their structures was three to five times greater than that of bulk diamond. They report their results in the journal Applied Physics Letters, from AIP Publishing.

“Our umbrella-shaped nanostructure has an effect similar to a solid immersion lens, which reduces the chance of total reflection on its upper surface and focuses the emitted light toward the ‘upside’ of the structure,” explained Mutsuko Hatano, a professor in the Graduate School of Science and Engineering’s Department of Physical Electronics at Tokyo Institute of Technology.

The self-aligned mirror goes a step further to enhance the efficiency of collecting this light by reflecting it at the lower surface area of the nanostructure.

The significance of the team’s discovery is that they’ve shown that the brighter fluorescence intensity of umbrella-shaped diamond nanostructures can be achieved by improving the photon collection efficiency of the nitrogen vacancy centers, which are the numerous point defects in diamonds that happen to boast the property of photoluminescence. 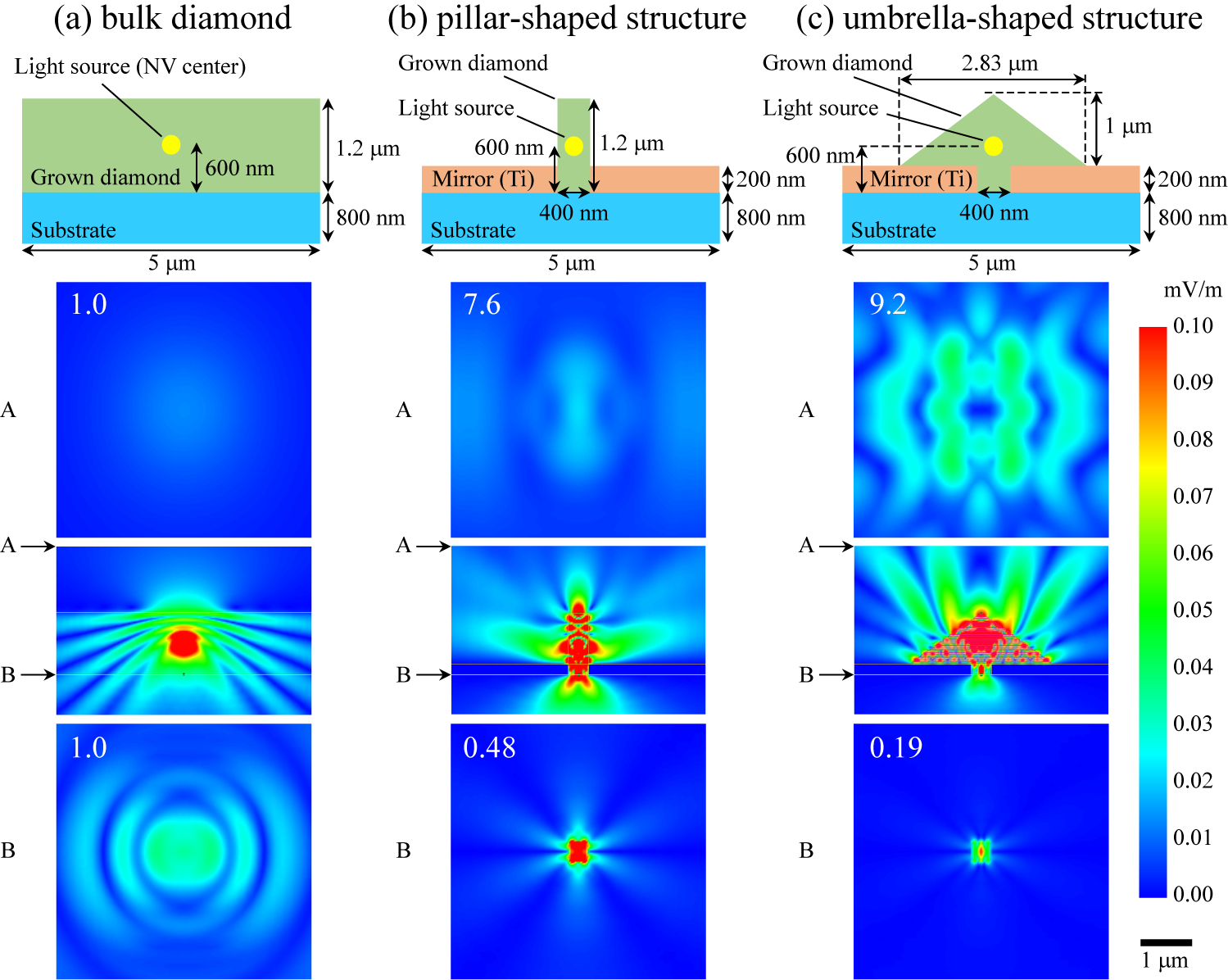 Brighter fluorescence intensity is an essential aspect of improving the photon collection efficiency from nitrogen vacancy centers. Due to the high refractive index (2.4) of diamond, the photon collection efficiency from the nitrogen vacancy centers in bulk diamond is low. “In other words, diamond works as an effective light waveguide in low-refractive-index environments,” said Hatano.

In terms of applications, the team’s nanostructures may find use in highly sensitive magnetic sensors for making biological observations or within the computational science realm for quantum computing and cryptographic communications.

Next, Hatano and colleagues plan to pursue better control of the nanostructures’ shape, as well as target a smoother surface by optimizing chemical vapor deposition growth conditions.

“Our goal now is to improve the nanostructures’ photon collection efficiency,” she said. “We also plan to demonstrate quantum sensors — in particular, highly sensitive magnetometers intended for life science and medical applications.”

This work was supported by CREST, Japan Science and Technology Agency.

Tokyo Institute of Technology and Japan Science and Technology Agency