Avalanching sand from dune faces can trigger loud "booming" or "burping" sounds, which Caltech and University of Cambridge researchers have discovered are different, but related, wave phenomena. 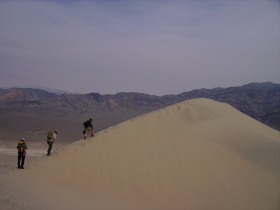 This sound is persistent and the dunes “sing” in frequencies ranging from 70 to 105 Hertz, with higher harmonics. Prior to the onset of a nearly monotone booming, burps of sound of smaller amplitude occur over a significantly broader span of frequencies.

As a group of researchers from California Institute of Technology and the University of Cambridge report in AIP’s journal Physics of Fluids, from AIP Publishing, they discovered that the “booming” and “burping” correspond to the transmission of a class of different waves within the dune.

Intrigued by these odd sounds emanating from the dunes, Nathalie Vriend researched this phenomenon as a Ph.D. student at Caltech with Melany Hunt, a professor of mechanical engineering. They collaborated with Rob Clayton, a professor of geophysics and borrowed a variety of geophysical scientific instruments to go out and “probe” the dunes’ acoustical mystery. Vriend has since moved to the University of Cambridge.

“During approximately 25 individual summer field days, on very hot and sandy dunes in California, we probed booming dunes,” Vriend said, “and they slowly revealed their underlying physics to us.”

The group focused on discovering how, specifically, the booming and burping sounds travel through sand. “We measured the wave propagation characteristics, which include the motion of grains and frequency and energy of the emitted sound. This, in turn, revealed that booming and burping are two different, but related, phenomena,” she said.

To do this, they used geophones to measure seismic vibrations within the ground, which are similar to microphones that pick up acoustical vibrations — sound pressure — in the air. “The waves travelling through the dune move individual grains of sand, which exert a force on the geophone that we use for measurements,” Vriend added.

It turns out that “burping sounds correspond to a surface Rayleigh wave, travelling radially along the surface of the dune in a nonlinear manner,” noted Vriend. “This means that relations between these properties are complicated because of the influence of individual grains.”

The loud booming sounds, she pointed out, originate from “linear P-waves that travel volumetrically and are reflected from internal layers inside the actual dune.”

The group was somewhat surprised to learn that for both booming and burping, the surface and volumetric signals are present with their own characteristic features and properties — but the dominant signals are different.

Another revelation was being able to excite the natural dune resonance on one occasion by simply providing an “impulse” on the dune surface. “A blow of a hammer on a plate triggered a natural resonance — around the booming frequency — inside the dune, which is something we’ve never seen described in literature,” Vriend said.

Since the group’s study revealed that burping and booming emissions are different acoustic phenomena, governed by different physical principles, it may also help explain some differences in measurements and interpretations regarding singing sand dunes made during the past decade.

“More broadly, seismic surveys for oilfield exploration or earthquake investigations tend to rely on length scales that are usually much larger than those used by our study,” she added. “Even if the study is done on a sandy substrate, the ‘effective medium’ response is recorded and individual grain interactions aren’t usually relevant. Our work illustrates the dual behavior of wave propagation when scales are reduced to a length where small- and larger-scale wave propagation converge.” 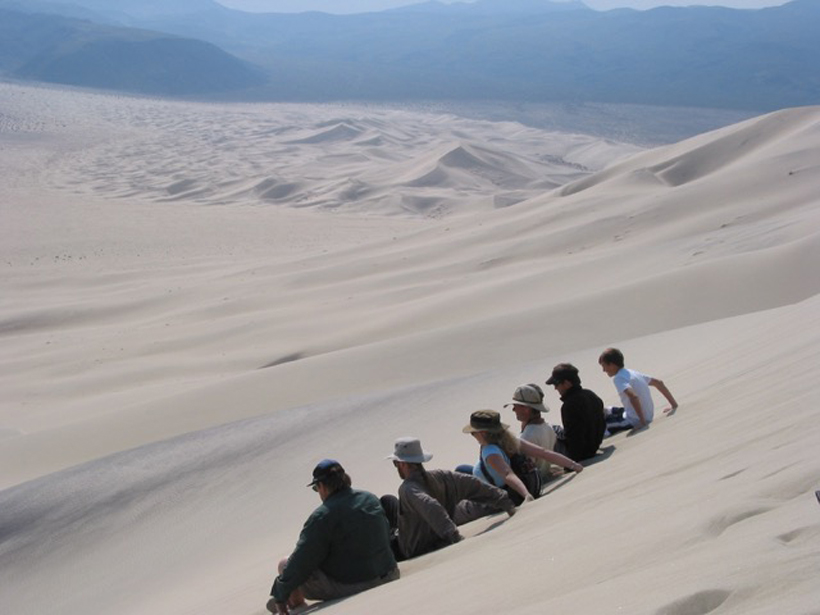 Vriend is now a Royal Society Research Fellow within the Department of Applied Mathematical and Theoretical Physics at the University of Cambridge. Her research group is working on a variety of projects to probe and solve other mysteries of granular dynamics.

One of these projects involves exploring “the granular dynamics during avalanching and its influence on the origin of structure in sand dunes in greater detail,” she said. “Our recent work involves using field and laboratory techniques to probe natural avalanching and sorting on large desert dunes in Qatar.”

California Institute of Technology and University of Cambridge