While exploring the behavior of fluids at the nanoscale, a group of researchers at the French National Center for Scientific Research discovered a peculiar state of fluid mixtures contained in microscopic channels

WASHINGTON, D.C., January 10, 2017 — Shrinking the investigation of objects down to the nanometer scale often reveals new properties of matter that have no equivalent for their bulk analysis. This phenomenon is motivating many current studies of nanomaterials which can reveal fascinating new phenomena.

It inspired a group of researchers at the French National Center for Scientific Research (CNRS) to explore the extent of our knowledge about fundamental properties of fluids, which demands reconsideration with the increasing use of fluids in the decreasing sizes of new devices, where their flow is confined into ever-smaller capillary tubes.

As the group reports in The Journal of Chemical Physics, from AIP Publishing, they discovered a peculiar state of miscible, or mixable, fluids contained within nanochannels.

This peculiar state “corresponds to a well-ordered, concentric arrangement of two coexisting liquid regions of different composition,” said Denis Morineau, director of research at CNRS, in Rennes. “One region forms a shell surrounding a second liquid core, both of which have a radial thickness of only one to four molecular sizes.

“[The phenomenon] is known as ‘microphase separation’ because it doesn’t imply that the constituents of the two liquid regions will indeed phase separate,” he said. “They actually form a unique homogenous liquid phase during normal conditions. In fact, this hidden tendency of binary fluids to form spontaneous supramolecular ordered structures is revealed only at the microscopic scale.”

In primary school, many pupils experiment with droplets of ink from, say, a fountain pen to observe their dispersion in a glass of water. Eventually, the droplet disperses fully and the miscible combination leads to the formation of a homogenous, light-blue solution.

“This shows that two liquids are fully miscible and their binary mixture forms a single liquid phase at thermodynamic equilibrium,” said Morineau. “Now, by combining different pairs of simple solvents, we’ve shown that this inherent property of fully miscible binary liquids is invalidated when the container size is scaled down.”

Effectively, they directly measured how small is too small for a sample of two miscible liquids to be considered a combined solution.

This phenomenon was first observed during a neutron scattering experiment performed at the French Neutron National Source Orphée in the Laboratory Léon Brillouin (LLB). The study was further developed at LLB in collaboration with the European Large Scale Facility (Institute Laue-Langevin).

“Scattered neutrons reveal where atoms are in the sample with a spatial resolution that reaches the nanometer scale,” Morineau said. “The unique method is sensitive to the isotopic nature of atom. Unlike X-rays, they provide a clear distinction between hydrogen and (the hydrogen isotope) deuterium.” 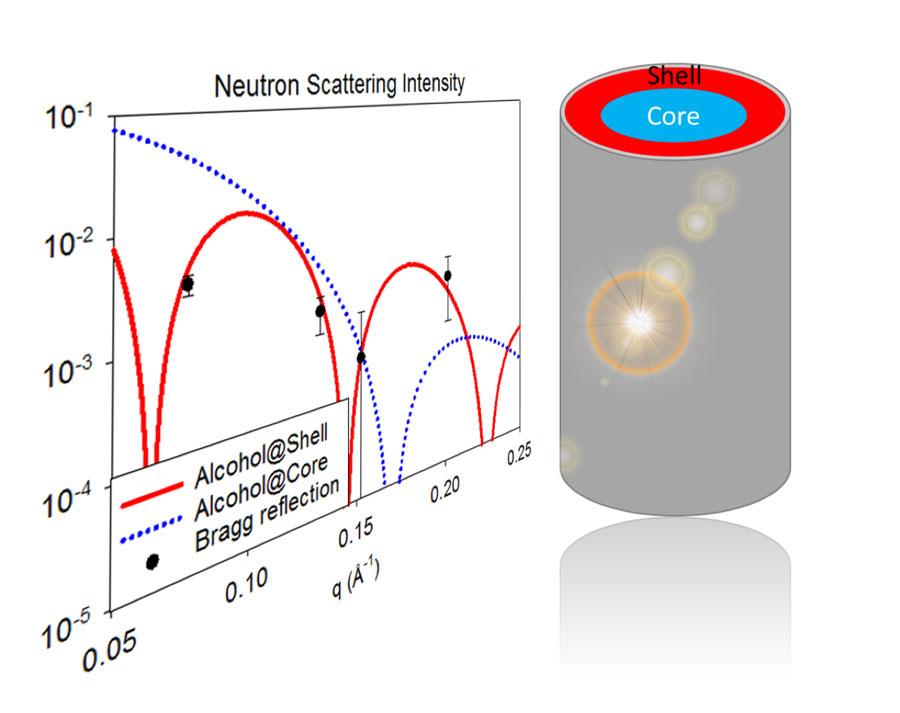 The group applied this method to study the structure of simple solvents such as hydrocarbons and alcohols, impregnated within synthetic, porous solids made of silica glass. The glass featured a honeycomb-like arrangement of parallel, eight nanometer wide cylindrical channels. The porous material served as a collection of nanometer-sized test tubes.

Morineau’s group mixed molecules of the same liquid, but differing in the total number of neutrons from the exchange of hydrogen atoms with its heavier isotope, deuterium. With the right proportions, the mixture can be tuned to scatter neutrons matching the scattering from the glass tubes, making the two indistinguishable.

“We first used this trick to prepare and confine liquids that have the same interaction with neutrons as the silica glass nanocapillaries. Under this contrast-matching condition, the neutron is blind to the liquid and the measured scattered intensity is cancelled,” Morineau said. “[With ink this would] correspond to the situation in which both the inked solution and the glass container have exactly the same color, making them indistinguishable.”

The group had a surprising observation for some confided binary liquids, where they expected neutron matching behavior, but the signal was higher than ever.

“This was the first direct proof that the paradigm of homogenous composition in a fully miscible mixture must break down within nanochannels,” said Morineau.

For real applicability, the group extended a series of carefully designed experiments to establish methods of labeling the components of binary liquids.

“Combined with the development of a computational model, it shows excellent agreement with our present experiments,” Morineau said. “We’ve provided a handy method to assess the original structures of fluids imbibed in nanometer-scale environments.”

Manipulating liquids in nanostructured pores is an activity common to many chemistry and materials science processes, but also plays a significant role in biological environments where the researchers expect their work to have broad applicability.

“Our study suggests that microphase separation, as a new type of nanostructure, results from the concomitant effects of specific surface interactions and spatial confinement,” said Morineau. “So we’re excited by the opportunity the modulation of both elements offers to promote a new control on supermolecular assembling of complex mixtures.”

They plan to further investigate the dynamics, out-of-equilibrium properties and fluid flow within such systems. “These are fundamentally of interest, as well as for the development of nanofluidic devices,” he said. “We’re now collaborating with two research groups from Hamburg to explore these different perspectives.”