WASHINGTON D.C. Nov. 15, 2013 — Despite decades of brewing tea in a whistling kettle, the source and mechanism of this siren sound of comfort has never been fully described scientifically. Acknowledging the vibrations made by the build-up of steam escaping through two metal spout plates is about as far as the explanation went — and was good enough for most people.

But not for a team of engineering investigators at the University of Cambridge in England, who have at last illuminated the mystery. Through a series of experiments, the team has produced a breakthrough in breakfast musings with the world’s first accurate model of the whistling mechanism inside the classic stovetop kettle. Their paper appears in the journal Physics of Fluids.

They have located the physical source of the teakettle whistle at the spout as steam flows up it, and identified a two-mechanism process of whistle production. Their results show that as the kettle starts to boil, the whistle behaves like a Helmholtz resonator — the same mechanism that causes an empty bottle to hum when you blow over the neck. However, above a particular flow speed, the sound is instead produced by small vortices — regions of swirling flow — which, at certain frequencies, can produce noise.

The findings are potentially able to explain familiar problems of other wayward whistles, such as the annoying plumbing noises caused by air trapped in pipes or damaged car exhausts.

Hey, it’s not as if people haven’t been trying to figure this out for more than a century. In 1877, for example, John William Strutt, 3rd Baron Rayleigh, wrote the foundational text, The Theory Of Sound, and considered the problem. In 1909 the first U.S. patent for an “alarm device for culinary utensils” was filed, followed up regularly by similar patent claims for various valve and signaling devices. What they all missed is a level of detail the Cambridge study revealed — the swirling vortices.

“Pipes inside a building are one classic example and similar effects are seen inside damaged vehicle exhaust systems,” said Ross Henrywood, the study’s lead author. “Once we know where the whistle is coming from, and what’s making it happen, we can potentially get rid of it.” 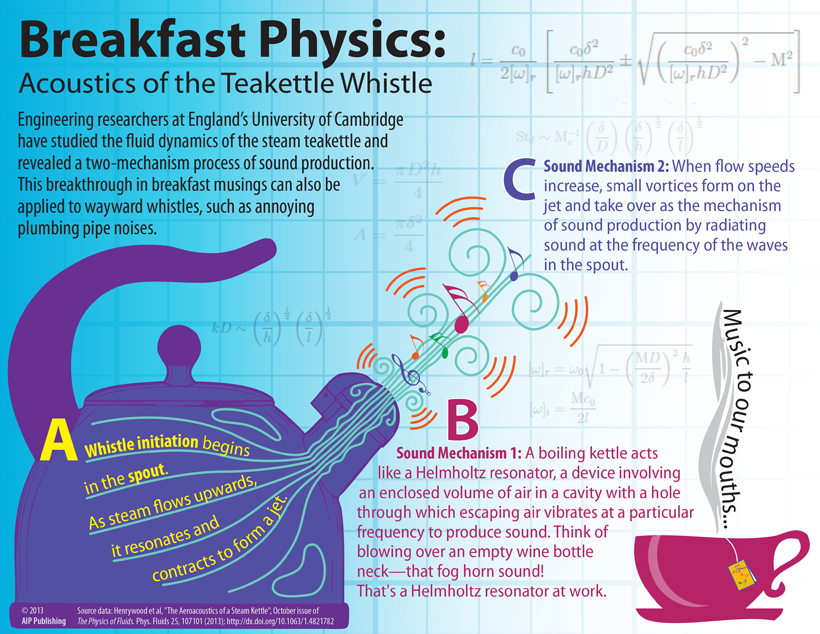 To interrogate kettle whistles, Henrywood, working with his academic supervisor, Anurag Agarwal, tested a series of simplified kettle whistles in an apparatus by forcing air through them at various speeds. The pair recorded the resulting sounds produced by rushing air, plotted the frequency and amplitude data of the sound, then analysed it to identify trends in the data. They also used a two-microphone technique to determine frequency inside the spout.

Vortex production starts as steam comes up the kettle’s spout and meets a hole at the start of the whistle, which is much narrower than the spout itself. This contracts the flow of steam as it enters the whistle and creates a jet of steam passing through it. The steam jet is naturally unstable, like the jet of water from a garden hose that starts to break into droplets after it has travelled a certain distance. As a result, by the time it reaches the end of the whistle, the jet of steam is no longer a pure column, but slightly disturbed.

These instabilities cannot escape perfectly from the whistle. As they hit the second whistle wall, they form a small pressure pulse. This pulse causes the steam to form vortices as it exits the whistle, and it is these vortices that produce the siren sound that has conditioned millions of people to anticipate the coming of the tea.

The aeroacoustics of a steam kettle