Uncovering the physical secrets underlying surface phenomena may increase cooling efficiency for a wide range of applications, according to MIT and Boston University researchers

WASHINGTON, D.C. Nov. 12, 2013 — Researchers across the globe are racing to find ways to improve the cooling of hot surfaces — for technologies ranging from small handheld electronics all the way to industrial-sized applications such as nuclear power plants.

By zeroing in on the physics at play underlying surface phenomena, a team of Massachusetts Institute of Technology (MIT) and Boston University researchers made a significant breakthrough. Although somewhat counterintuitive, they discovered that by creating sparsely packed textures on surfaces rather than densely packed ones, they were able to hold droplets in place and enable cooling.

Their findings, described in Applied Physics Letters, which is produced by AIP Publishing, have the potential to enabling cooling efficiency gains in a wide variety of applications.

Worldwide, nearly 86 percent of our energy is currently derived from steam cycles. “If we’re able to improve this efficiency by even 1 percent and deploy it to all of the power plants, it could have a significant impact,” explains Kripa K. Varanasi, Doherty Chair in Ocean Utilization, as well as an associate professor of mechanical engineering at MIT.

Varanasi’s lab is known for tailoring or modifying surfaces to significantly improve efficiency. One of their recent creations was a slippery surface coating, which is now being commercialized by a spinoff called LiquiGlide. They’re commercializing a container liner that makes toothpaste and other difficult-to-remove products, such as ketchup, slide right out of their tubes and containers — greatly reducing waste.

For this particular study, the goal was the exact opposite of creating slippery surfaces. The researchers wanted to make liquid come into direct contact with hot surfaces so cooling could occur. They began by exploring the physics of surface phenomena, because whether focusing on mass transfer, momentum transfer, energy transfer, or charge transfer, the commonality is that the transfer occurs on a surface. 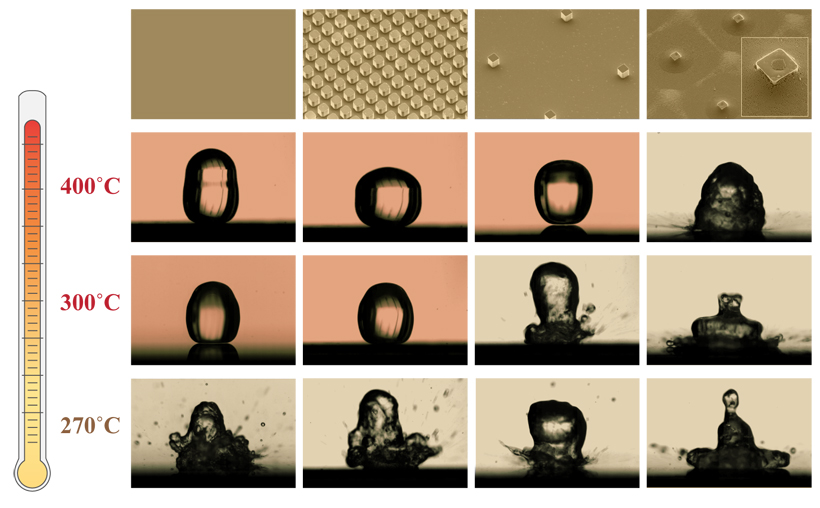 “Vapor films are created beneath the droplets, which is a critical problem in boiling. Once the vapor films start forming, they act as a barrier to heat transfer because vapor has a lower thermal conductivity than liquid,” Varanasi says.

In boiling, ideally the liquid will make contact with the solid. But this phenomenon has a certain threshold known as a “critical heat flux” — once it’s reached, a catastrophic event may occur. For example, in the absence of cooling fluid during an emergency situation in a nuclear power plant, a nuclear fuel rod’s surface can become very hot. Pouring water on it to attempt to cool it results in the formation of a vapor film that actually interferes with cooling. As a result, droplets float on the hot surface, which is known as the “Leidenfrost effect.”

“Vapor that forms as the evaporation of the droplet is able to escape through the surface texture,” Varanasi explains. “Interestingly, there are two simultaneous competing forces occurring in this situation. As the vapor forms, it exerts an upward force on these droplets. And the texture pulls on the droplet with capillary attraction. This allows the liquid to come into contact with the surface and cool it.”

They can engineer similar structures using a variety of materials and techniques, according to Varanasi. Right now, the team’s focus is on exploring the energy, water and agriculture nexus because it’s all interrelated. “We’re hoping in our own humble way — since many phenomena occur upon surfaces — to improve them and enable big efficiencies in this nexus,” he says.

Key markets that may benefit from greater cooling efficiency gains include, but aren’t limited to, nuclear power plants, semiconductors and electronics, oil and gas, fire suppression, desalinization, and metallurgy.