A team of researchers exploring the aerodynamics of flying snakes finds that whirls of wind, the little vortices surrounding it, give them an extra lift. 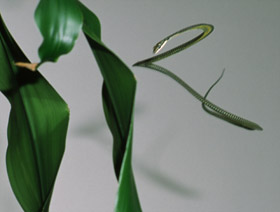 WASHINGTON D.C. Mar. 4, 2014 — Animal flight behavior is an exciting frontier for engineers to both apply knowledge of aerodynamics and to learn from nature’s solutions to operating in the air. Flying snakes are particularly intriguing to researchers because they lack wings or any other features that remotely resemble flight apparatus.

Before you envision flying snakes raining down from the sky, the ones involved in this study are small — about 1 meter in length and the width of your thumb — and live in the lowland tropical forests of Asia and Southeast Asia.

Previously, experiments in a wind tunnel had returned an unexpected finding: the snake’s shape is not only good at generating a force of lift, but it also gets an extra boost of lift when facing the air flow at a certain angle.

“After experiments uncovered this, we decided to use computer simulations to try to explain it,” says Lorena Barba, associate professor of mechanical and aerospace engineering at the George Washington University.

So much of the aerodynamics of animal flight — especially that of flying snakes — remain a mystery. Scale is important, but also the manner in which flight is achieved.

“Rather than fixed wings, animal fliers have flapping wings,” explains Barba. “In the case of gliders, their small scale means they’re always in a flurry of whirling winds. By understanding how they can be graceful and efficient under these conditions, we can in turn use that knowledge to create small flying machines that are equally graceful.” 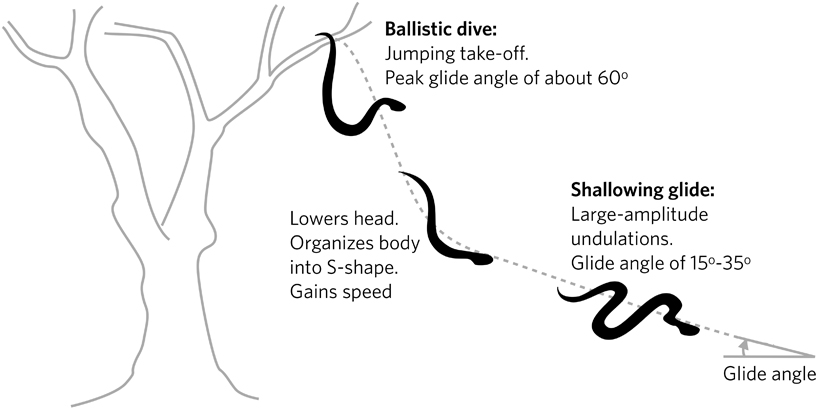 Whirls of wind can be particularly useful: these little vortices “can give flying snakes an extra lift,” notes Barba. “The shape of the snakes in flight — which is a flattened version of its shape at rest — gets help from little vortices around it.”

Next, the researchers would like to include more elements of the snake’s real gliding conditions into their computer simulations, such as its full body forming an S-shape, rather than working with just a section.

“This will be more difficult to do in a computer model, but it will probably reveal more about the complicated flow patterns snakes take advantage of to be such gifted gliders,” Barba says.

Lift and wakes of flying snakes