Dominant, Majority Viewpoints Emerge Quickly on Twitter and, Once Stabilized, Become Difficult to Change -- According to New Study in the Journal CHAOS

That question was tackled by a group of researchers in China who investigated how opinions evolve on Twitter by gathering about 6 million 140-character-or-less messages that were tweeted out over a six month period in the first half of 2011. They ran these messages through computer algorithms that sorted them by topic (“iPhone 4” or “blackberry,” for instance), and they analyzed the underlying sentiments of the authors as they evolved over time.

Described in the journal Chaos, produced by AIP Publishing, the work reveals several surprises about how Twitter shapes public opinion, said Fei Xiong, a lecturer at Beijing Jiaotong University who gathered and analyzed the data with Professor Yun Liu. The new revelations may shape how political candidates run their social media campaigns or influence the way companies market their goods and services.

What the Study Found

Xiong and Liu discovered that public opinion on Twitter often evolves rapidly and levels off quickly into an ordered state in which one opinion remains dominant. In true social media form, this consensus is often driven by the endorsements of larger and larger groups, which tend to have the most influence.

The work also revealed that when dominant opinions emerge, however, they tend not to achieve complete consensus. In fact, Xiong said, when Twitter users who hold minority views are faced with overwhelming opposition, they are still not likely to change their opinions.

Since public opinion levels off and evolves into an ordered state within a short time, small advantages of one opinion in the early stages can turn into a bigger advantage during the evolution of public opinion, Xiong said.

“Once public opinion stabilizes, it’s difficult to change,” he added.

The work also revealed that Twitter users overall are more likely to work to change the opinions of others than to admit to changes of their own. 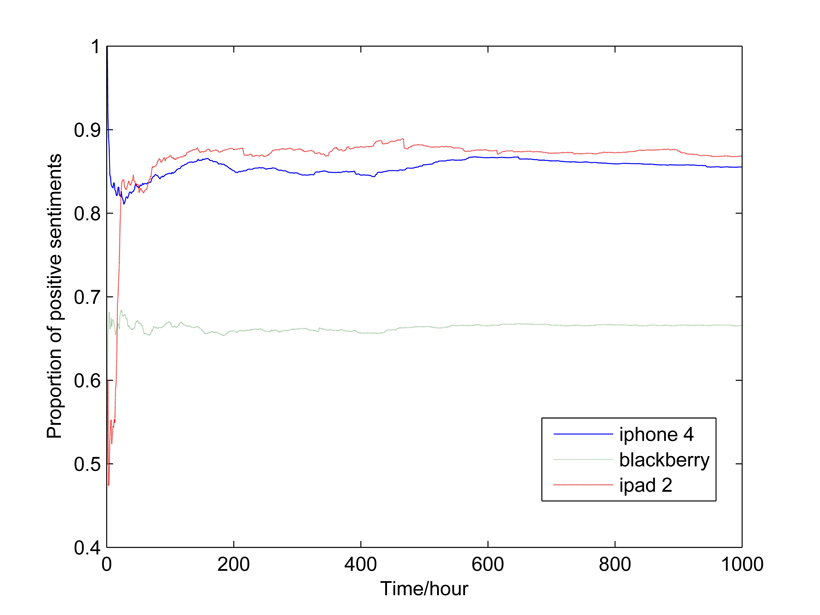 How the Data Was Collected

The researchers downloaded tweets for this study using Twitter’s open API (application programming interface) to get a random sampling of all data, which was then narrowed based on topic.

While this particular study was done more than two years ago, and there are more Twitter users now, the researchers believe that the results would still be similar if done on a new dataset today, though Xiong and Liu said the analysis might be improved by integrating new algorithms that analyze the sentiment of the messages.

Xiong envisions that political candidates and large companies may benefit from applying this work toward developing “network applications” that would move beyond simply collecting and analyzing users’ opinions and allow them to develop and test hypotheses about what really works.

“By focusing on a network application, candidates or companies can analyze the characteristics and behavior patterns of their supporters and protesters to explore whether the measures they take can influence public opinion and which opinion may succeed,” Xiong said.