Washington, D.C., Oct.27, 2015 – Hall thrusters are advanced electric rocket engines primarily used for station-keeping and attitude control of geosynchronous communication satellites and space probes. Recently, the launch of two satellites based on an all-electric bus has marked the debut of a new era – one in which Hall thrusters could be used not just to adjust orbits, but to power the voyage as well. Consuming 100 million times less propellant or fuels than conventional chemical rockets, a Hall thruster is an attractive candidate for exploring Mars, asteroids and the edge of the solar system. By saving fuel the thruster could leave room for spacecraft and send a large amount of cargo in support of space missions. However, the current lifespan of Hall thrusters, which is around 10,000 operation hours, is too short for most space explorations, which require at least 50,000 operation hours.

To prolong the lifespan of Hall thrusters, a team of researchers from the French National Center for Scientific Research have experimentally optimized the operation of a novel, wall-less thruster prototype developed a year ago by the same team. The preliminary performance results were satisfactory, the team said, and pave the way toward developing a high-efficiency wall-less Hall thruster suitable for long-duration, deep space missions. The researchers present their work in a paper published this week in the journal Applied Physics Letters, from AIP Publishing.

Hall thrusters are electric rocket engines using a super high speed (on the order of 45,000 mph) stream of plasma to push spacecraft forward. Their operating principle relies on the creation of a low-pressure quasi-neutral plasma discharge in a crossed magnetic and electric field configuration. The propellant gas, typically xenon, is ionized by electrons trapped in the magnetic field.

In the conventional Hall thruster configuration, the magnetized discharge is confined to an annular dielectric cavity with the anode at one end, where the gas is injected, and an external cathode injecting electrons. Ionization of the propellant gas occurs inside the cavity, with ions accelerated by the electric field that stretches from the interior to the exterior of the cavity.

“The major drawback of Hall thrusters is that the discharge channel wall materials largely determine the discharge properties, and consequently, the performance level and the operational time,” said Julien Vaudolon, the primary researcher in the Electric Propulsion team led by Professor Stéphane Mazouffre in the ICARE-CNRS Laboratory, France.

“Thus, an effective approach to avoid the interaction between the plasma and the discharge channel wall is to move the ionization and acceleration regions outside the cavity, which is an unconventional design named a Wall-Less Hall Thruster,” Vaudolon said.

Last year, the team developed a small-scale, wall-less thruster prototype based on a classical Hall thruster. At first the researchers simply moved the anode to the channel exhaust plane. However, this first wall-less thruster turned out to be a low-performance device, as the magnetic field lines are perpendicular to the thruster axis, which cross the anode placed at the channel exhaust plane.

“Magnetic fields are used to trap hot electrons injected from the external cathode and prevent them from reaching the anode,” Vaudolon said. “Basically an electron travels along the magnetic field line. If the magnetic field lines cross the anode, a large portion of hot electrons will be collected at the anode and won’t take part in the ionization of the xenon atoms, resulting in high discharge current, low ionization degree, and consequently, low performance level.”

Based on the PPS-Flex, a 1.5 kilowatts class thruster designed by the GREM3 Team at LAPLACE Laboratory, France and capable of modifying the magnetic field topology over a broad range of configurations, the team has validated their optimization strategies by modifying several parts and parameters of the thruster. The measurement of some operation parameters such as the thrust level, anode efficiency and far-field ion properties displayed a satisfactory performance level. However, Vaudolon said, some further optimization is still needed for the thruster’s efficient operation at high power.

“The wall-less thruster allows scientists to observe regions of the plasma previously hidden behind the channel walls. Now the plasma region can be observed and diagnosed using probes and/or laser diagnostic tools,” Vaudolon said. He also pointed out that the access to key regions of the plasma facilitates a thorough investigation of plasma instability and small-scale turbulence for a better understanding of the discharge physics and anomalous electron transport.

“Despite decades of research, the physics of Hall thrusters is still far from being understood, and the device characterization methods still rely on trials and testing, leading to expensive efforts,” Vaudolon said. “The major difficulty in developing predictive simulations lies in modeling the interaction between plasma and wall. The wall-less design would be an effective solution, potentially making future predictive simulations feasible and reliable.”

After the lessons learned from the testing of the PPS-Flex version, the team’s next step is to design a dedicated wall-less Hall thruster and fully exploit the possibilities offered by a wall-less architecture. 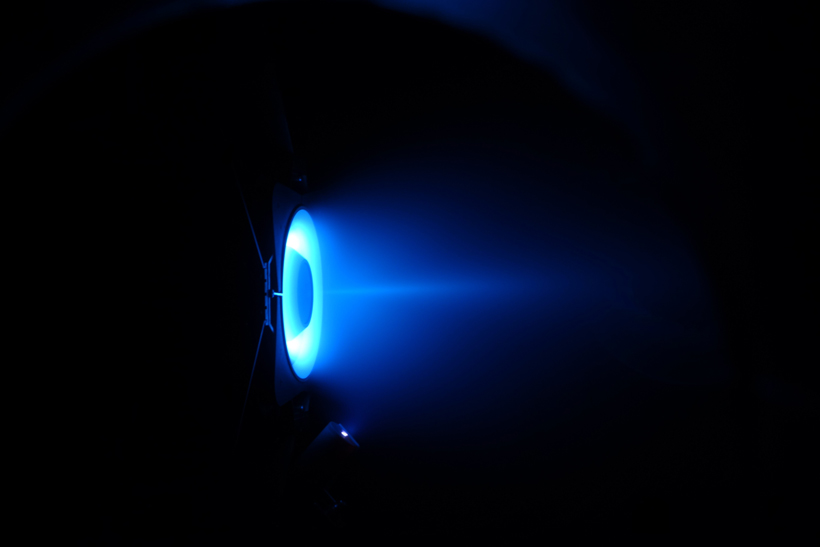 Optimization of a wall-less Hall thruster