WASHINGTON, D.C., October 23 — Researchers at the Université du Québec have recently conducted a survey of four Canadian cities to determine the economic feasibility of installing geothermal heating systems in homes in Montreal, Halifax, Vancouver and Toronto.

For their analysis, the researchers used RETScreen, a free clean energy software package developed by the Canadian government, along with the typical energy considerations to determine the financial savings from the heating systems over the course of 22 years. The vertical closed loop heating systems, in which vertical pipes run into the ground, were proposed for use in both space heating and cooling and to provide 25 percent of the total amount of domestic hot water. The researchers found that the systems would be most feasible in Halifax, with fewer potential savings in the other cities.

“It’s do-able in Halifax because the people in Nova Scotia tend to heat with heating oil, which is relatively expensive at this time,” said Yvan Dutil, a researcher at the Université du Québec’s public engineering school, École de technologie supérieure (ÉTS) and now tutor at the Télé-Université. “In Toronto and Vancouver, however, the natural gas heating source is ridiculously cheap.”

Conversely, Montreal was ruled out because it already receives 99.7 percent of its energy needs from hydroelectric and wind energy, meaning that the investment in geothermal heat pumps would bring little return on investment in both cost and reduction in greenhouse gas emissions.

Dutil and his colleagues at Dalhousie University describe the results of their analysis this month in the Journal of Renewable and Sustainable Energy, from AIP Publishing.

“The problem is that it’s hard to save money with the geothermal pump in Canada under the current energy prices,” he continued. This is almost entirely due to the cost of installing the geothermal pumps, which is around CA$15,500, with the pumps themselves at CA$4,000.

One proposed solution was a CA$5,000 subsidy on the installation of the pumps, which would cause the project to break even in 7 years in Halifax — compared to the initial projection of 12 — and after 14 years in Montreal.

“It doesn’t mean that it’s not a solution, just that the market conditions aren’t there,” Dutil said. “Hopefully, technological improvements and price reductions in the geothermal heat pump, and the prices in the energy market will change this picture in the near future.” 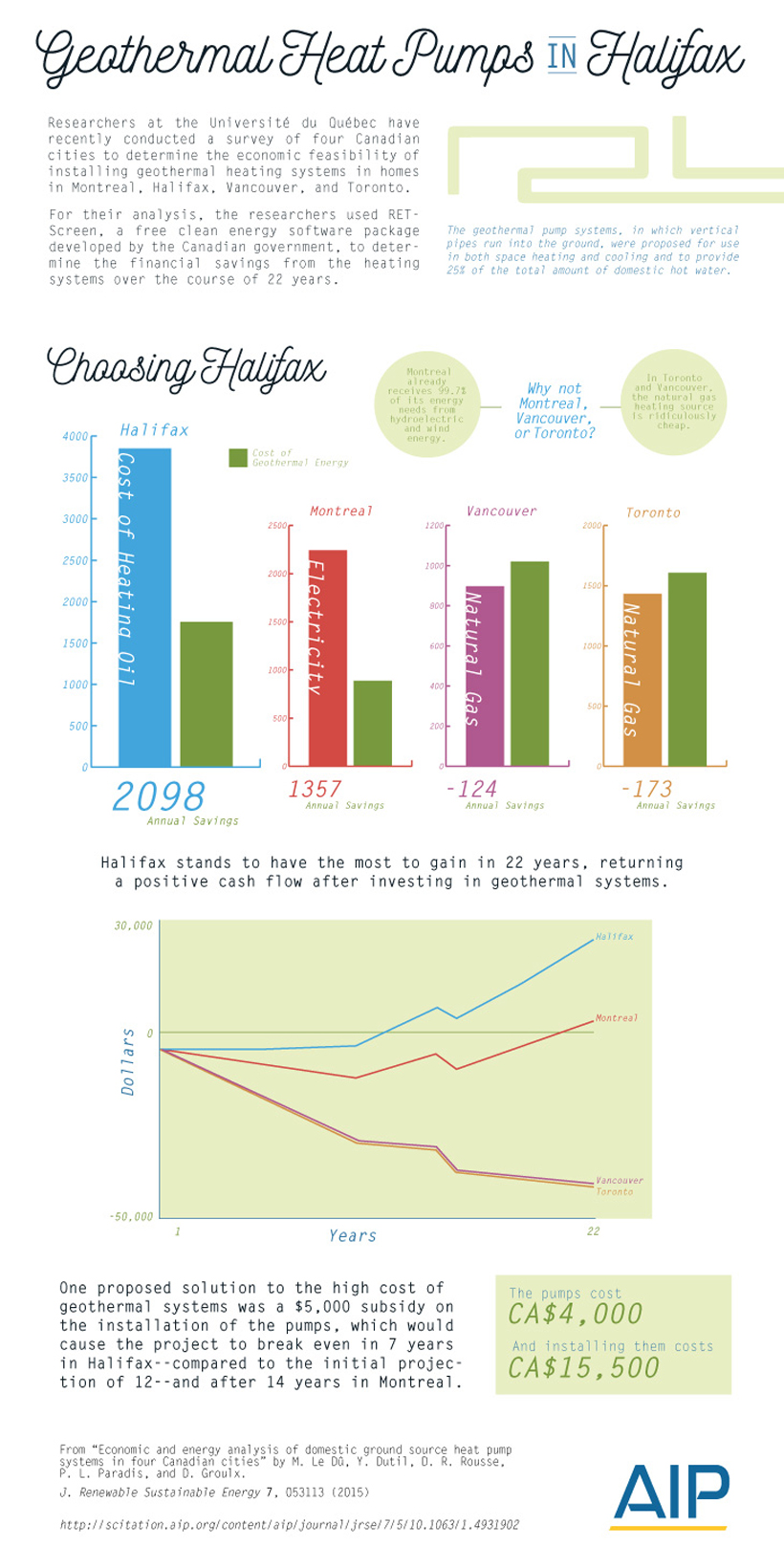