New insights may lead to more efficient methods for collecting extra hydrogen, which can corrode and explode. 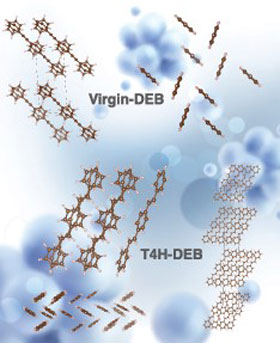 WASHINGTON, D.C., November 15, 2017 — Excess hydrogen can cause problems in a variety of industries. It can corrode semiconductors, electronics, and nuclear fuel sitting in storage. It also poses an explosion hazard. To remove this extra hydrogen, chemists can use an organic compound called a hydrogen getter that chemically binds to several hydrogen atoms.

But sometimes, during this binding process — called catalytic hydrogenation — the partially hydrogenated products become volatile, melting and evaporating away before they can bind to more hydrogen atoms. Now, researchers have explored how and why this volatility varies during hydrogenation, suggesting that a previously underappreciated effect from carbon-hydrogen bonds in the molecule is the main culprit.

The new analysis, published in The Journal of Chemical Physics, from AIP Publishing, can help chemists identify the ideal conditions needed for catalytic hydrogenation so they can better remove excess hydrogen.

“This creates a model for the behavior of other organic getters, allowing us to predict their optimal operating temperatures and environments,” said Long Dinh, a physicist at Lawrence Livermore National Laboratory.

Dinh and his colleagues focused on a getter called 1,4 bis(phenylethynyl)benzene, or DEB. To remove hydrogen, crystal flakes of DEB are mixed with catalysts in the form of solid pellets. The pellets are made from activated carbon — whose porous structure provides abundant surface area — coated with palladium nanoparticles. The palladium catalyst splits hydrogen molecules into hydrogen atoms, which can then bind to DEB and form carbon-hydrogen bonds.

DEB is a high-capacity getter, capable of binding with up to eight hydrogen atoms. Most researchers thought that as getters like DEB bind with more hydrogen atoms and enlarge, they become more volatile. At high operating temperatures, they can then vaporize away, drifting far from the catalytic pellets where there aren’t any hydrogen atoms with which to bind. “You stop the hydrogenation process prematurely,” Dinh said.

To study how and why DEB changes in volatility, the researchers measured properties such as vapor pressures and melting points, probed molecular structure, and ran quantum mechanical computer simulations to model the hydrogenation process. Their analysis suggests that the carbon-hydrogen bonds in DEB play a key role in the molecule’s volatile behavior.

From their analysis, the researchers determined that the optimal conditions for DEB hydrogenation is below about 175 degrees Fahrenheit, if done in a good vacuum. “Our results,” Dinh said, “can be applied analogously to other catalytic organic hydrogen getter systems as well.”

Volatility of the catalytic hydrogenation products of 1,4 bis(phenylethynyl)benzene