Studying a Famous Leonardo Self-Portrait, a Team of Scientists Has Developed a New, Nondestructive Way to Gauge Degradation of Ancient Paper Art and Docs

WASHINGTON D.C. June 3, 2014 — One of Leonardo da Vinci’s masterpieces, drawn in red chalk on paper during the early 1500s and widely believed to be a self-portrait, is in extremely poor condition. Centuries of exposure to humid storage conditions or a closed environment has led to widespread and localized yellowing and browning of the paper, which is reducing the contrast between the colors of chalk and paper and substantially diminishing the visibility of the drawing.

A group of researchers from Italy and Poland with expertise in paper degradation mechanisms was tasked with determining whether the degradation process has now slowed with appropriate conservation conditions — or if the aging process is continuing at an unacceptable rate.

To do this, as they describe in Applied Physics Letters, from AIP Publishing, the team developed an approach to nondestructively identify and quantify the concentration of light-absorbing molecules known as chromophores in ancient paper, the culprit behind the “yellowing” of the cellulose within ancient documents and works of art. 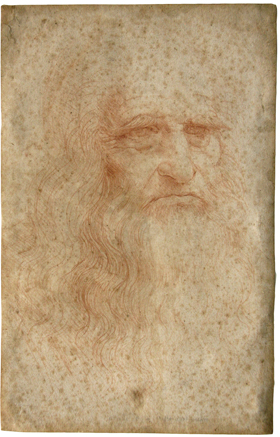 “During the centuries, the combined actions of light, heat, moisture, metallic and acidic impurities, and pollutant gases modify the white color of ancient paper’s main component: cellulose,” explained Joanna Łojewska, a professor in the Department of Chemistry at Jagiellonian University in Krakow, Poland. “This phenomenon is known as ‘yellowing,’ which causes severe damage and negatively affects the aesthetic enjoyment of ancient art works on paper.”

Chromophores are the key to understanding the visual degradation process because they are among the chemical products developed by oxidation during aging and are, ultimately, behind the “yellowing” within cellulose. Yellowing occurs when “chromophores within cellulose absorb the violet and blue range of visible light and largely scatter the yellow and red portions — resulting in the characteristic yellow-brown hue,” said Olivia Pulci, a professor in the Physics Department at the University of Rome Tor Vergata.

To determine the degradation rate of Leonardo’s self-portrait, the team created a nondestructive approach that centers on identifying and quantifying the concentration of chromophores within paper. It involves using a reflectance spectroscopy setup to obtain optical reflectance spectra of paper samples in the near-infrared, visible, and near-ultraviolet wavelength ranges.

Once reflectance data is gathered, the optical absorption spectrum of cellulose fibers that form the sheet of paper can be calculated using special spectroscopic data analysis.

Then, computational simulations based on quantum mechanics — in particular, Time-Dependent Density Functional Theory, which plays a key role in studying optical properties in theoretical condensed matter physics — are tapped to calculate the optical absorption spectrum of chromophores in cellulose.

“Using our approach, we were able to evaluate the state of degradation of Leonardo da Vinci’s self-portrait and other paper specimens from ancient books dating from the 15th century,” said Adriano Mosca Conte, a researcher at the University of Rome Tor Vergata. “By comparing the results of ancient papers with those of artificially aged samples, we gained significant insights into the environmental conditions in which Leonardo da Vinci’s self-portrait was stored during its lifetime.”

Their work revealed that the type of chromophores present in Leonardo’s self portrait are “similar to those found in ancient and modern paper samples aged in extremely humid conditions or within a closed environment, which agrees with its documented history,” said Mauro Missori, a researcher at the Institute for Complex Systems, CNR, in Rome, Italy.

One of the most significant implications of their work is that the state of degradation of ancient paper can be measured and quantified by evaluation of the concentrations of chromophores in cellulose fibers. “The periodic repetition of our approach is fundamental to establishing the formation rate of chromophores within the self-portrait. Now our approach can serve as a precious tool to preserve and save not only this invaluable work of art, but others as well,” Conte noted.