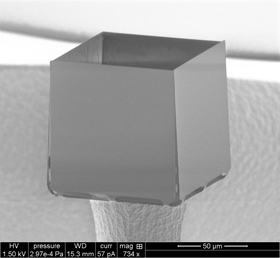 WASHINGTON D.C. June 3, 2014 — Researchers from the University of Twente in the Netherlands have taken the precise art of origami down to the microscopic scale. Using only a drop of water, the scientists have folded flat sheets of silicon nitride into cubes, pyramids, half soccer-ball-shaped bowls and long triangular structures that resemble Toblerone chocolate bars – an omnium-gatherum of geometric objects, which are almost too tiny to see with the naked eye.

“While making 3-D structures is natural in everyday life, it has always been extremely difficult to do so in microfabrication, especially if you want to build a large number of structures cheaply,” said Antoine Legrain, a graduate student at the MESA+ Institute for Nanotechnology at the University of Twente. To help solve the challenge of building in miniature, researchers have turned to the technique of self-assembly, in which natural forces such as magnetism or surface tension trigger a shape change. 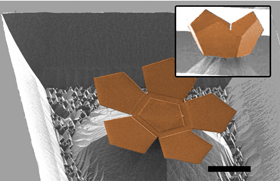 The University of Twente team also created silicon-based shapes, but they used a more ubiquitous liquid – water – to activate and control the folding. They describe their water-based folding system in a paper in the Journal of Applied Physics, from AIP Publishing.

“Water is everywhere, is biocompatible, cheap, and easy to apply,” said Legrain. Using water instead of solder also speeds up the folding of each individual structure. If the water-based process is further developed to fold multiple structures at once, it could become cheaper than current self-folding approaches, said Legrain.

To create their menagerie of 3-D shapes, the researchers used a custom software program to first design the flat starting pattern. They then “printed” the design onto silicon wafers. To create hinges, the researchers etched away material just before depositing a thinner layer.

“Possible shapes are in principle limitless,” said Legrain, “as long as they can first be made on a flat surface.”

To fold the designs, the researchers pumped a small amount of water through a channel they had left in the silicon wafer. The capillary forces created by water molecules sticking to each other and to the silicon pulled the flat surfaces together to form fully three-dimensional creations.

The team also discovered that the final structures, which are about the size of a grain of sand, can be opened and closed up to 60 times without signs of wear, as long as they remain wet.

The ability to unfold and refold the structures could be useful in biomedical applications. For example, self-folding tools could deliver drugs exactly where they are needed in the body or grab a tiny amount of tissue for a micro-biopsy. 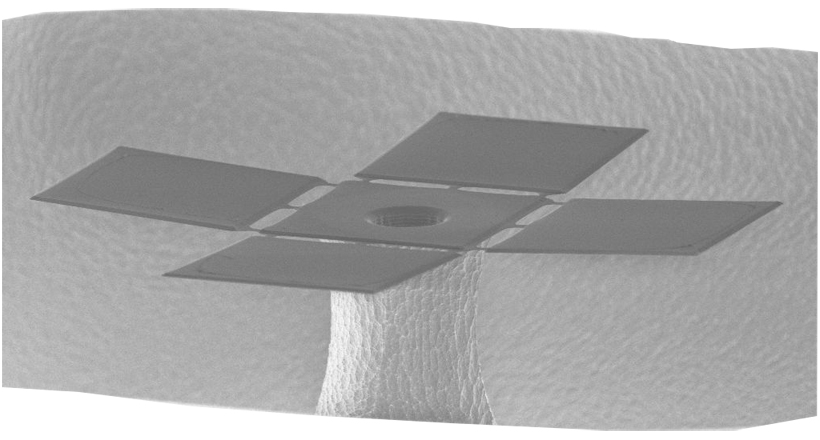 This is not the first time the researchers demonstrated the ability to fold silicon with water droplets, but it is the first time they devised a precise way to control the size of the droplets by pumping water through a channel located beneath the flat design. Previous efforts, which involved placing the water droplets by hand, were hard to control and resulted in structures that could only be folded once.

Watching through a microscope as the new system folded and unfolded shapes in front of his eyes was an exciting experience, said Legrain. “Cleanroom fabrication at research level can be long, tricky and frustrating. It is a good feeling when we obtain such nice results out of it,” he said.

For now, creating the soccer ball and Toblerone shapes are fun ways for the researchers to test their system and understand its capabilities. Going forward, the team is working toward making conductive hinges and creating 3-D sensors with their new technique.